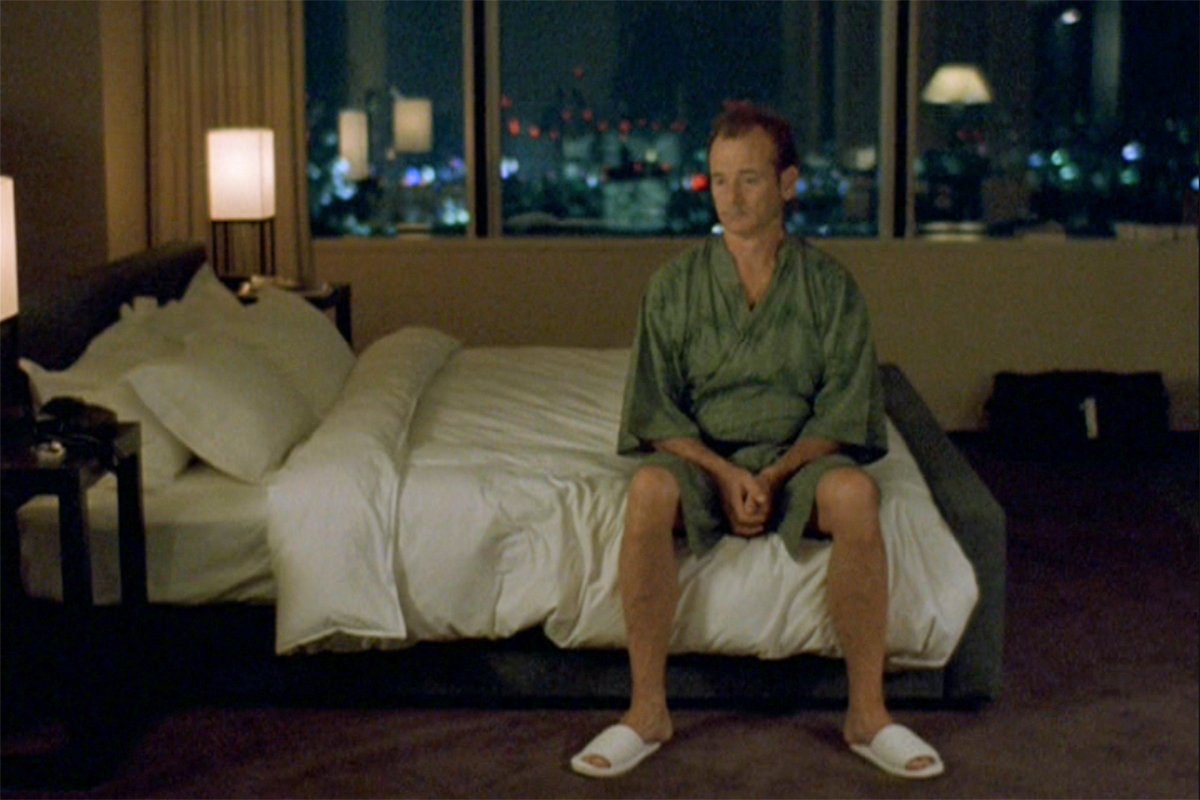 I think it goes without saying that Lost in Translation is easily Sofia Coppola’s best film as a director, but looking back upon why it gets the reputation as such is easy: for at only two films it still remains her most fully realized work to date. That’s not to say personal bias from great connection has also allowed itself to become a factor but there’s something about how Sofia Coppola presents this story that only calls upon great connection from my own end because the first memories I had of watching Lost in Translation are not fairly distant regarding where I’ve headed in life at this moment. I’ve started out a fairly lonely person without any sense of connection in the world and even though I’ve taken comfort in social media it brings back a specific melancholy that hit me when I watch Lost in Translation.

Bob Harris is an actor past his prime travelling to Japan only to film a commercial for Suntory whiskey for the Japanese market. Charlotte is a much younger woman also in Tokyo, together with her husband as he is on an assignment. She has just recently graduated from a philosophy course at her college and because of the nature of her husband’s assignment, she is left alone to wander by herself. By chance, she and Bob meet up inside of a restaurant and although the two of them never properly introduce themselves, a bond forms between the two of them. A part of me thinks about this lack of a “proper” introduction and how it should hinder the film’s supposed idea of a friendship but it soon rang clear to me why this choice was the best way to tell this story.

It starts off from how Sofia Coppola sets up a background for her characters before they meet. The running theme is that while they are in Tokyo, they are indeed “lost in translation” given how no one, even their closest peers – seem to have a place for them. Bob has already become an obsolete presence and in order to find attention in some way, he must now take part in ads for foreign land. Charlotte just seems only to be around for her own husband while he’s out on a trip for himself and just constantly leaves her alone. At first I thought to myself that there was a visible commentary on generational disconnect coming at play in here and maybe not in a manner akin to The Graduate – but instead something confined in a simpler area. The film’s setting in Tokyo is a place of a different language, but it fits a metaphor represented by the film rather perfectly, we have Murray and Johansson’s characters distanced from people they know almost in a manner that what they speak comes out like a different language to them.

The friendship between Murray and Johansson nevertheless feels convincing enough not only because of the devotion from both performers but Sofia Coppola’s screenplay allows only the very best to shine from both of them. Whether it come from the dialogue or how she directs both leading performers to get only the very best from them both, the strengths lie within a certain empathy that Sofia Coppola allows the viewer to immerse themselves within as we watch these two neglected souls as they may or may not have found a place for themselves. The title, “lost in translation,” in a sense feels like a perfect echo for the mood that they live within – but this soon brings me back towards where I find it to be easier at heart to find a greater connection with the material onscreen. All throughout, this feeling of empathy is one among Sofia Coppola’s greatest assets and it only allows her methods of communication with the viewers to strengthen – for what she captures here is a disconnected feeling that we bring ourselves closer to.

What’s also most helpful on her end is how there’s a feeling that some say will make the film seem as if it is about “nothing,” for rather instead we see two souls wandering together in Tokyo. It could be one thing that drives Lost in Translation to continue moving but there’s a reason it would already be easy enough for Coppola to drive out so much – because she keeps her own story simple enough and it carries the essences of life, ranging from the fun to the monotony. And within the happier moments come the melancholy, but it all comes in this manner because it feels crucial to capturing the bare essential of why Lost in Translation works as perfectly as it does. Amidst the film’s background being set within Tokyo where neon is present and set to grab one’s eye, it still works because the disconnect from other parts of the society other people occupy is something that runs across the globe. Perhaps it will take another faceless figure to overcome it, but to that point they’re more than just faceless.

That whisper at the very end is something that I still ponder about, for maybe it was a moment where something of greater melancholy arises – but we never hear any of it. Then I think to myself about what happens had we heard it at all, maybe it could have gone on to highlight a sense of meaning is finally found. As the film ends on The Jesus and Mary Chain’s “Just Like Honey,” suddenly the images haunt me. We’ll find meaning at one point of our lives and then suddenly it will all just go back to the same monotony that we recognize our lives have been shrouded with. Then it soon rang clear to me that was why Lost in Translation had worked so well, because Sofia Coppola wanted to simply turn another background into something that we all can recognize amidst the monotony of our own lives and within no time, it forms only a great sense of empathy around ordinary people who are dejected in some way, for indeed these are people who are “lost in translation.”