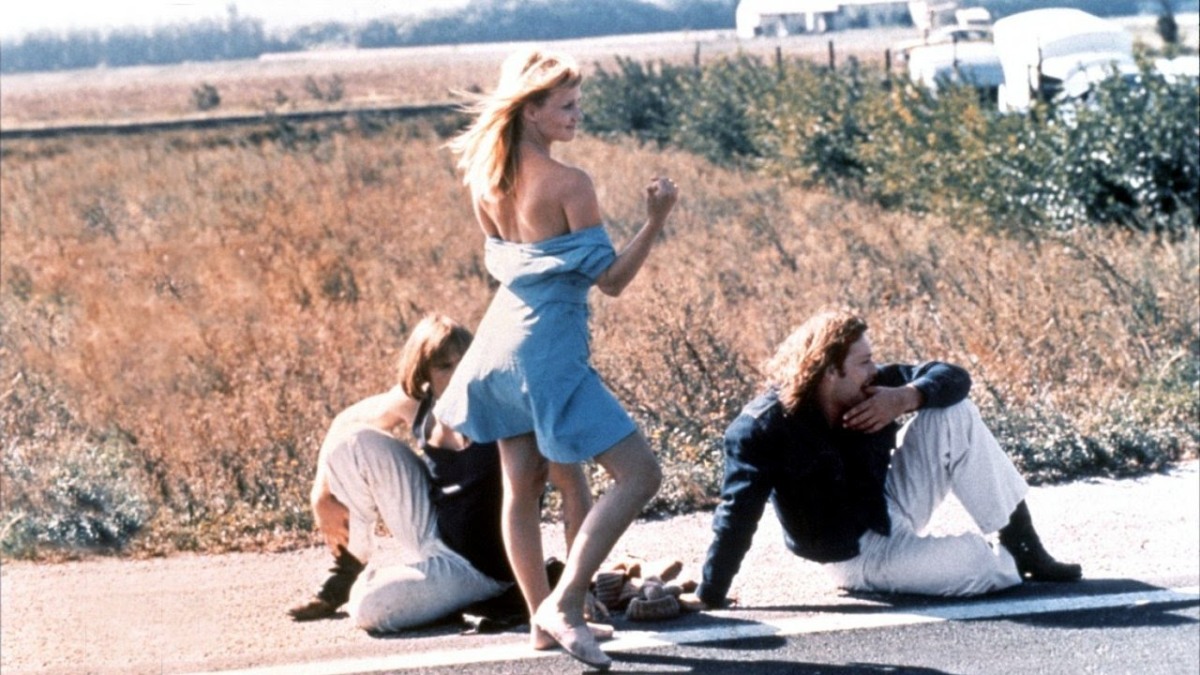 Probably a “not for me” case that we’re coming to look at here because there was so much about Going Places that seemed almost appealing to me in some way, yet I found so little coming out. This sexy comedy-drama by Bertrand Blier has a lot to say, but I can’t help but feel like whatever it was that Going Places had intended for only ended up getting lost. And I’m not going to deny that there were moment during Going Places that have ever had me waiting for something more, but then there was another point to where I was wondering why all of that joy only had made a really sudden stop – the last thing I would have wanted a film with this sort of premise to do. I still kept hope for where Going Places would head with its stance on the actions of its characters and how it defines them but then came the point I just decided it was completely not for me after all.

Going Places stars Gérard Depardieu and Patrick Dewaere as two petty thugs who are on the run and charm their way out of the trouble they get themselves in with women. They steal the car of one hairdresser and eventually kidnap his assistant, an apathetic girl seeking her own sexual pleasure. This premise is one that I think could have been clever but so much else about this only ended up rubbing me the wrong way and I was also finding myself increasingly all the more tired with where it was going because there was even a point to which I said I was readily disliking what Going Places was even about anymore. There’s a point where it’s about one woman and then after it jumps to another, it sets in motion what exactly it was that I was already finding myself lost with the message the film even wanted to send to its viewers.

Perhaps the most off-putting thing about Going Places, for me, was the fact I just found both of its leads far too unsympathetic. It shouldn’t be something I mind so much but it was to the point there was no sense of growth or consequence in here, and thus it was all the more difficult for me to care about where Going Places was going to take them. It was increasingly difficult for me to find myself wanting to watch these people as they go around and take women in for their own gain and it was even harder for myself to believe that the women were on board the whole way through. I’d only imagine that this was considered crass for the day, and it hasn’t changed a little bit today. It shouldn’t be a bad thing but it was extremely off-putting to myself considering the fact that this was a comedy and I should be laughing, yet I’m not.

I’d be on board with Going Places and its distinctive lack of consequence if only it ever had anything to say about the repulsive nature of its characters, but no matter where I look there’s nothing to be found. None of these misadventures even seem to hit me as funny or interesting, just crass merely to the point it goes out of reach and everything feels at a blank. The film’s gender politics make Going Places an absolutely unnerving experience, but to some extent I also found myself “charmed” watching Gérard Depardieu to the point I was waiting for a sense of consequence to come for him. He was the only character that ever seemed to go through some form of growth, whereas the female roles feel present to further the pleasures of he and Patrick Dewaere, and I’m not even sure what to make of how the film moves on with any of this because it’s not like it set in motion an established tone: just one that starts off one episode and then abruptly jumps to the next.

At its best, the production is decent and the writing is fantastic: it was at that point where I wish I found myself liking the film. Then I just can’t seem to get a hold of how certain characters were written, especially the females. It was at that point I just thought this could easily have ended up becoming a far more unpleasant experience than it already was because what the film establishes of its two male protagonists only set in motion a discomforting mood within myself. I didn’t want to spend my time watching two borderline sociopathic men go on with their lives treating women the way they do without a sense of growth coming in on their character arcs or a sense of spirit. Going Places doesn’t seem to spend enough time looking for anything to observe about how their lifestyles have ended up laying an effect about what they are as people, as a matter of fact I tried to care about what was going on and it was ultimately just easy for me to doze off because nothing about its characters ever seemed remotely appealing.

Going Places is something I would probably dislike more but my admiration for the production goes without dispute; but the nature of its two lead characters is enough to put me off because they’re just repulsive as they are. I’d be on board if Bertrand Blier ever carried a sense of spirit within their trials in order to find this funny, but there’s absolutely nothing to be said about why these people are the way they are. It’s easy to see why this film has gone on to be seen as one of the most controversial of its own day, but even under a modern light it hasn’t aged well in the slightest. There’s at least a good Gérard Depardieu performance and a brief Isabelle Huppert appearance that could at least keep me watching but I was finding myself struggling even to care about what Going Places even wanted to be. I’d only imagine someone like had Éric Rohmer directed this, maybe he’d have something actually to say about why these people are the way they are because as it is, Going Places is just crass and raunchy without meaning.

All images via Kino Lorber.