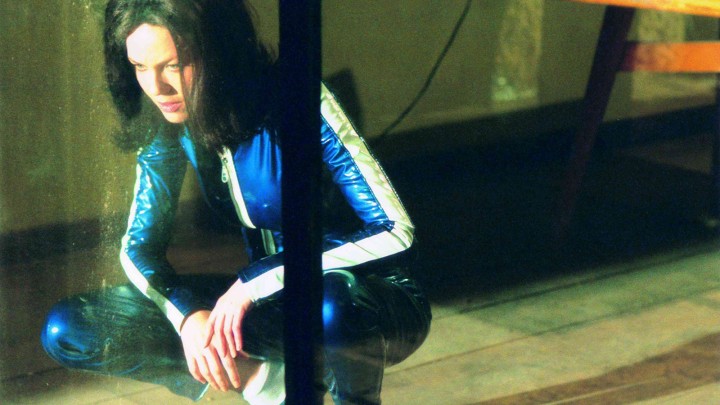 I should probably note that New French Extremity is a movement in general that I’ve struggled with engaging with in its entirety. When I started exploring them through the works of Gaspar Noé I already found myself hypnotized but amongst the transgressive nature of their films I also found it to be a struggle trying to find meaning behind what they intend to show (Ma mère and In My Skin make great cases for this) because there’s a level to which all I see is nothing but a means to push the boundary through what they show. Demonlover presents another case because it wasn’t the fact it was so violent that caught my eye, it was because the whole atmosphere it created was so perverted to that point I recognized inside of its human characters a slow descent into madness that made the film’s lack of coherence only the most fitting for Assayas’s work; I was only sold in from there that he was truly amongst the most versatile filmmakers working today.

Assayas’s sense of worldbuilding here is remarkable; a great visual style complimented by an equally eerie score by Sonic Youth (I’m inclined to praise anything with their name because they also happen to be my favourite band of all time) but the developing world that Assayas presents in Demonlover isn’t especially any different from the world we are living in right now. It feels almost like he is drawing so much of an influence from David Cronenberg’s Videodrome but what he explores is the prevalence of these perversions in mainstream media, given the impact they leave behind on the most innocent of minds. It comes from the mirroring of a consumer’s psyche where Demonlover finds itself becoming a far more unsettling work thematically, because Assayas isn’t afraid to show the most graphic imagery whether it be within the relationship between digital and reality – exposing its own society’s own desensitization to violence.

But as Demonlover becomes even more of a labyrinth comes another thought that draws back memories of Dario Argento’s Suspiria. Maybe this film isn’t so much a giallo but because of the consistent nature of the film’s explicitness amidst this labyrinth of distancing yet hypnotizing characters: style becomes substance in the best possible sense. With all of that having been said its cast does wonderfully with the material they are given (Connie Nielsen and Chloë Sevigny arguably being the very best of the bunch) and it comes from this distancing where we recognize a downward spiral into madness comes about. Assayas soon blurs the line between a perverted fantasy and the reality which is being inhabited and there’s a great sense of amorality coming into play that ultimately becomes the core of the film’s most unsettling sequences; Demonlover doesn’t show his characters as humans going on with their lives but as victims of a system watching them.

It’s not surprising that Demonlover would draw such a divided response but at the same time it’s a saddening thought because what Assayas has presented is something so enchanting especially in its most unsettling moments. If this isn’t a perfect film then it’s easy for myself to say that it’s close enough the way it is and it’s the only way a film about hentai can be made. The moment it enters one mind is the point to where it starts destroying it, because of the fact that we know it has already become so prevalent in our world and certain people want to get their hands on it as a means of carrying power over these perverts. There’s a whole lot about Demonlover worth digging into but the way it stands, it’s an eerie film that slowly but steadily works its way into one’s mind because it already feels set to drive one crazy from the lack of coherence coming by. If there was anything else good that had come by, I was already in the mood to play another Sonic Youth album for myself as a reminder for why I love their music as much as I do because with Demonlover, Assayas added more reason for myself.

All images via SND Films.