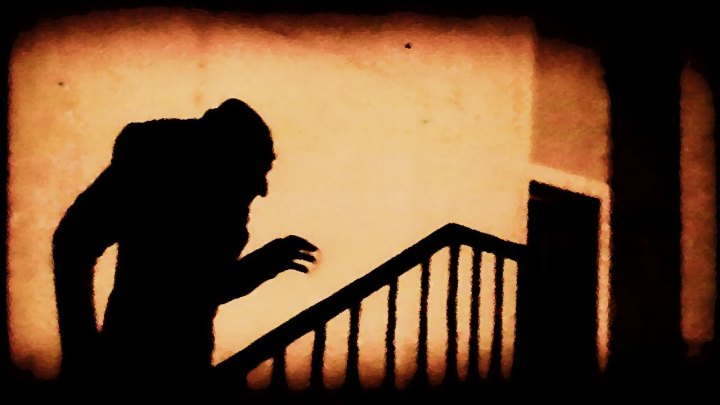 My first viewing of Nosferatu was at a point where I claimed not to be so fond of the horror genre but at the same time, my knowledge of such films was fairly limited. As far as my own memories go, this was one of the first silent films that I can recall having watched as I was getting into films themselves and a greater appreciation for the craft was something that I felt inside of me. The running thought of fear stayed within my head as I watched Nosferatu more times over the years because F. W. Murnau’s film was more than just a small step in letting my own love for the horror genre grow so quickly. As a matter of fact I find it especially difficult to imagine what it must have been like for audiences to have experienced such terror from the presence of Max Schreck as Count Orlok back in the day, because the name Nosferatu has made for itself in the horror genre is a well-earned one as it still hasn’t lost a single bit of the power it had back during its original release.

An unauthorized adaptation of Bram Stoker’s Dracula, Murnau’s film focuses on the story of Count Orlok, a vampire from Transylvania feasting on the blood of unsuspecting citizens in the town of Wisborg. Very closely, Murnau sticks with the narrative of Stoker’s original source but the obvious deviations from the source material as made clear by name changes are only the least of what allows Nosferatu to stand apart on its own. It’s very distinctively a German Expressionist picture, but Murnau isn’t limiting the joys that can be found within Nosferatu all within the same spot. It tells the same story that we love but the greatness of Murnau’s work isn’t one that limits itself towards something that would be as easy to boil down as telling another’s story to the screen. Perhaps it might not be so much one that scares right on the spot, but nevertheless it was where I found a greater appreciation for horror as a whole had come about.

Murnau’s use of lighting is one among many things that allows Nosferatu to create the unsettling atmosphere presented alongside the set pieces. But it caught me this time around that the nature of the craft soon hits as reflection between reality and illusion, because Murnau had only managed to form something so captivating from the art of imagery – it was all that was needed on his own end if he wanted to keep a running thought of fright present. Murnau’s greatest joy is that when he works in the dark, it symbolizes the unknown and that there comes humankind’s greatest fear. And we as viewers, nevertheless, feel the presence of Count Orlok as it pervades the film in its entirety. In a sense it almost feels like watching theater, because as a whole the assembly of the production is something that still appears unreal even for modern standards – and it isn’t felt merely from performances alone, as terrifying as Max Schreck’s Count Orlok may be for the eye.

Yet why is it that these images still remain so terrifying today? Murnau’s presentation indeed remains so heavily symbolic but as a matter of fact, the sheer dementedness still reflects a sense of paranoia from the audience’s end. Paranoia that Count Orlok will show up out of nowhere and prey upon them for they are victims of circumstance. But somehow there’s a sense of beauty to be found in the arrangement of the set pieces that feels distorted because of how Murnau sets up an atmosphere for Nosferatu, inside of a fear of a sickness known as the Plague. It’s present in one spot, but it spreads much faster as it keeps killing – Murnau’s film distinctively has remained an allegorical piece of work, but the simplicity of Nosferatu keeps the film an engaging work as a whole. These images remain terrifying because they find a way to work oneself into the mystery just as a Hollywood film-noir would, and it feels every bit as satisfying as reading the original Dracula story for the first time.

If there ever was anything about Nosferatu that places it above most horror films, it was the sheer presence of Max Schreck himself as the titular Count Orlok. But as the film’s production shares so many theatrical qualities whether it be aesthetically or visually, it was only fitting that Max Schreck’s performance was one that was an image in itself – one that was only set to leave a lingering presence even within one’s own mind. Max Schreck wasn’t merely performing anymore when he played Count Orlok, the very image he created as the vampire was only heightened by how Murnau introduces him and gives an exit. Yet in such a theatrical fashion it’s only fitting that some viewers can expect performances that feel exaggerated to a certain extent but on Murnau’s end, it presents itself in such a reflective manner as he recognizes discomfort all around. It wasn’t only limited to Max Schreck, it lingers even within the human characters and only from there something of greater power comes.

Appreciation for Nosferatu might be one thing that overshadows my own enjoyment as a whole, and yet as I continue watching it more over the years it always leaves me in awe. Nosferatu doesn’t need more than it already has in order to leave the impact which it presents, because as a whole it’s so discomforting as it plays upon exaggeration of fear and soon feels reflective of how we, as audiences, respond to the unknown. From there alone it’s already stunning to me that something like Nosferatu has been done within the 1920’s, because the name it has made for itself as both a staple of the horror genre and the German Expressionist movement is without a doubt a well-earned one. For as overused a phrase as it may be, this truly is a must-see not only for horror fans but for movie lovers of all sorts, because they just don’t make them like this anymore.

All images via public domain.