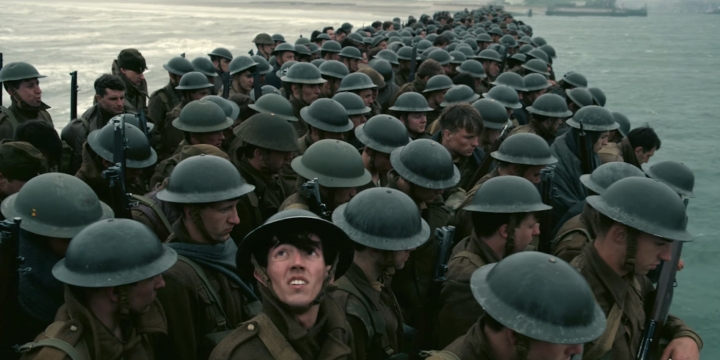 Christopher Nolan’s films are loved and hated in equal measure, for he’s already established a dedicated following that has blown him up to the heights of being one of the greatest filmmakers of his time – and at the same time he has also established a crowd of detractors who renounce the praises of his fans. Personally I’ve found myself in the middle, for he was once a filmmaker I loved as I was getting into movies although his work after The Dark Knight I have already found for myself had not held up nearly as well as I remembered. It was one among many reasons I was skeptical coming into Dunkirk, for I was only worried that I may have soured on Christopher Nolan far too much with his most recent films not doing particularly much for me as he once did – only to find myself in for a pleasant surprise. I saw another side of Nolan that I’d also want to continue in his future films, for it felt refreshing to watch as I was seated in the theater.

Dunkirk tells three stories within its narrative: one on land, on sea, and airborne. I already had a feeling from this choice on Nolan’s end that he was aiming for an almost documentary-style approach to the setting, for it was not particularly character-driven but a movie that functions upon the actions within its setting. Dialogue is fairly minimal, showing a good sense of restraint upon Christopher Nolan’s end for it had never been the best part of his films, but when necessary, it comes along and still feels natural to the environment. It feels refreshingly minimalist, something that almost seemed missing from modern blockbusters – but at the same time it was especially pleasing because of what we know of Christopher Nolan’s comfort zone. Even the structure to which he employs, where he uses three different perspectives in order to form a narrative – never finds itself overreaching but rather instead comes to Nolan’s advantage in getting oneself immersed in the setting.

Where Dunkirk finds itself at its best comes from how it establishes an atmosphere through its own setting. For as difficult as it has always been for me to get fully immersed with Nolan when he deliberately tells a story calling for deconstruction a la Inception or Interstellar, it feels so distinctly alienating and it exemplifies what I’ve always found to be one of his worst tendencies as a filmmaker. What they do with their own convoluted nature doesn’t feel particularly natural and more towards being expository, but it was pleasing enough to watch what Nolan is experimenting with visually. It’s easy enough to applaud the film’s visual work, but the editing and production of Dunkirk are pure excellence all around – enough for me to forgive the jarring nonlinear gap between story threads even if it were ever so a slight one at that.

Performances function well enough with what they’re given on Nolan’s end. Though it caught me out of nowhere what Nolan managed to get out of Harry Styles, who made his acting debut in here. It was surprising enough for me to say he was one of my favourite parts of the film but even with a script that provided little, he still showed enough emotion to service what Nolan had in mind for the setting and I’m interested what happens in his future. Mark Rylance, Cillian Murphy, Tom Hardy, and Kenneth Branagh are among the more recognizable names inside of the large cast which Christopher Nolan has assembled here, but they function well enough within their setting even if there’s little to do on their own part because of what Nolan has formed all around, a film that bombards its audience within the experience of its own setting. They see everything just as the soldiers see events happening in their own eyes as if they were present within the time themselves.

Even though I appreciate Nolan’s minimalistic approach there was still something I felt was missing from Dunkirk that kept me from loving it. It was easy enough for me to appreciate how Nolan decided to show his audiences what it was like during the Dunkirk evacuation in World War II by stepping out of his own comfort zone through visual storytelling and a distinctively shorter running time than most of his works (the film clocks in at 106 minutes). And yet there was a part of me that felt some of Dunkirk was dull because Christopher Nolan almost seemed as if he was expecting too much of his audiences to have a grasp with the setting by bombarding them with the actions, and yet his characters still feel stale as a whole. Even with functional and some great performances coming their way, I still felt as if I was at a great emotional distance with its setting because I didn’t feel attached to these characters as opposed to just droning around them moving in such a setting. But even on a count they still have little to do, the distinct lack of emotion between story thread was noticeable and often jarring.

I’m very interested to see what more can Christopher Nolan do with this sort of experimentation on his hands because it seems far more interesting formally than the rest of his post-Dark Knight films. And while Dunkirk isn’t without its flaws, it was nevertheless a great experience and it is truly Nolan’s best work since The Dark Knight. It’s a loud film that will shroud the audience with what is set to come within the environment it creates everywhere it can, but the least that I can say is that if Nolan were directing a war film this is something that I would have expected on the spot. But even this simplicity managed to be compelling enough as it stood, for it flew by faster than most of Nolan’s work in the meantime, not because of the distinctively shorter running time it carries compared to his other works but because of how brisk it feels.