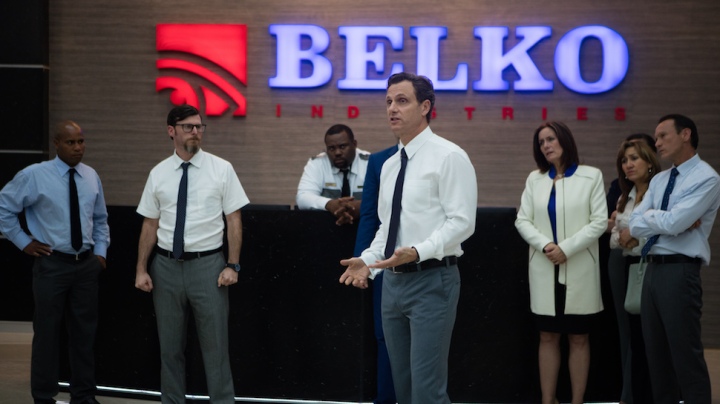 My best guess about how a concept like that for The Belko Experiment was conceived comes from James Gunn watching Battle Royale numerous times and attempting to have at a go at it himself. This doesn’t seem so much like a bad idea because I do think Gunn can actually make something entertaining out of the concept but what I got from here quickly went from being something promising to just flat out unimaginative and monotonous. I don’t want to come down to comparing this to Battle Royale because said film isn’t even the first one to take a similar idea and The Hunger Games won’t end the concept as a whole if films like The Belko Experiment are around, but because of how beaten down it has become, I’m only waiting for the day it becomes exciting once again for Battle Royale helped revitalize interest in such a clever concept.

Our subject is a twisted social experiment being performed on the employees of Belko Industries. No one knows one another very well, but they end up coming together for once upon the instance in which they have to kill three other employees in order to survive. The fact that this is all taking place within what is supposedly a monotonous office setting should indicate promise because of how little the people know one another and how competitive they will become for their own lives, but quickly there comes the feeling that we’ve seen this all done so much better in far more creative ways. But I’ve only expected something like this to have come out from James Gunn because he has only made clear his love for pop culture within the Guardians of the Galaxy films, yet at the same time I was also left wondering how much of this really felt like it were something that did come of his own mind.

Gunn’s screenplays from what I have seen always had a tendency to avoid taking themselves overly seriously and under the right hands they only make for something entertaining even when we can recognize the occasional contrivances from being derivative. The case with The Belko Experiment is clear, because we have a concept that has only been done far more creatively through films like Battle Royale and the one thing I kept thinking about was how much I would much rather be watching said film. It was clear enough from what films like Battle Royale had established out of its own identity that it had confidence to stand atop all the rest but The Belko Experiment is a case that shows the opposite. It’s a James Gunn screenplay, but it’s directed in such a way that it takes its own concept so seriously it loses touch of why the idea was a fascinating one.

The characters are as monotonous as they ever could be just like those co-workers you never talk with inside of an office setting, but even after their own descent into madness as a result of this social experiment we still don’t have much time to grasp onto why they have become the way they are. The most that had come by were memories of Office Space, another film that handled said monotony in a much more creative way because we still recognized these exaggerated stereotypes as human characters because of what Mike Judge had made them out to be, but in Greg McLean’s case we only ever find ourselves attaching to John Gallagher Jr.’s Mike Milch because it seemed he was the only character who had much of an arc established for him. But quickly enough, an opportunity to become more creative is wasted when guns come into play, because it seems there’s too little courage to go as far as using ordinary office tools as unusual weapons.

What I do like about this concept is what it has to say about human nature under extreme circumstances, but at the same time I can’t find myself coming to care whatever it was that James Gunn or Greg McLean wanted to say because I just sit down thinking about how many other films have already come forth in far more imaginative ways. The fact the characters still feel like cutouts even after the downward spiral hits in doesn’t help in the slightest, but even less so with the fact that guns and knives have already found themselves becoming the most prominent choice of weapon within the office setting. What seemed nice to see how much tension it managed to rack up within a running time of an hour and a half, making one feel as if they were in the setting, but the most it ever really comes off as is both exploitative and misguided in all the worst possible ways, because there’s nothing new being brought out.

I was hoping that because of the fact James Gunn was writing there would still be something occasionally entertaining because the last thing I’d ever want to see from him is material that took itself seriously. In The Belko Experiment, it was not what I got. Instead, I got a bloodbath that failed to phase me because of how I found so little even being said. If it wanted to be an insightful social commentary about human nature coming together within extreme measures, then at least give it some focus. And if James Gunn were to write, then allow a trace of satire to be found. None of that was ever to be found in The Belko Experiment, and thus what we are left with is either a poorly done take on said concept, or just a misguided social commentary on human nature. The most we even get out of watching The Belko Experiment is sadism without purpose, and that’s just boring to think about.