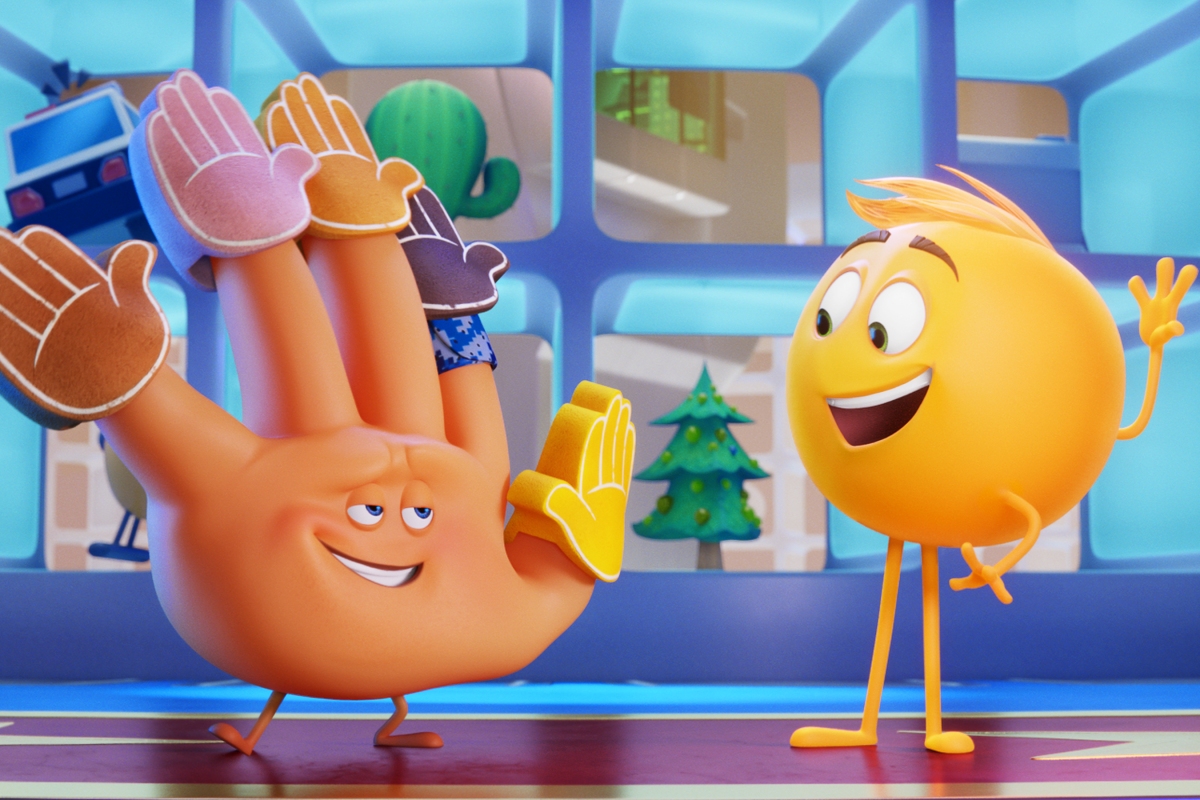 Actually did not want to be among the dogpile of half-stars that this movie was receiving from peers, so much to the point I was even remembering that I’ve seen much worse this year as I watched The Emoji Movie. And while said thought still remains rooted in my head, I can only come out of The Emoji Movie confirming that it truly is as bad as it is being made out to be. Not since Foodfight! have I come across such a lazy mishmash trying to pose as family entertainment in the most cynical manner and while showing it off with pride at full display. The whole time I was sitting through The Emoji Movie I had only refused to believe that a conceptualization so asinine would be made into a real product by a major studio given what Foodfight! has proven and it seems clear enough that within later years to come, this will only go down along the like.

The Emoji Movie is set inside of a phone within the world of Textopolis and revolves around a multi-expressioned “meh” emoji named Gene. In this world, every facial emoji is required to retain a single expression before being sent out via text message and mishaps ensure the moment Gene is scanned making a confusing expression, thus apparently compelling the phone’s owner to go ahead and delete everything. This is where Gene sets out to find a way to become reprogrammed into an everyday “meh” emoji the way his parents are, and not without the help of a few unused emojis, going through many apps within the phone in order to fix everything up in time. Trying to figure out any semblance of development within this quest is hard enough for me because it’s only one level about why The Emoji Movie fails to stand out.

Imagine the plots of Wreck-It Ralph, Inside Out, and Who Framed Roger Rabbit all shoved into a blender without a sense of the creativity or cleverness that made any of said films work as well as they did. It’s only a most fitting way to describe The Emoji Movie because the way it builds its own world seems either like what we’ve seen before, even to the point that any sort of attempt so alter what’s already been made familiar to our own eyes has only left behind something too incomprehensible. It didn’t help that the worldbuilding here was dull enough, but the needlessly convoluted plot structure was alienating even for adult viewers. Quickly there it was easy enough for me to say The Emoji Movie represented all the worst things a modern day family picture can be, because they seem to exist merely to keep children gazing at the screen without an idea what they’re watching because that’s what the studio makes of them.

Whether it be the lazy morals or the cheap cash-ins present, even somewhat decent animation can’t change how revolting a product like The Emoji Movie is. Arguably the most infuriating aspect of The Emoji Movie is seeing how it’s practically an 80-minute long smartphone commercial because of how aggressively it is advertising many phone features and apps – because the film is clearly built upon modern trends. There’s no ounce of a memorable character present in the film because of how much time the film dedicates to advertising a smartphone in general, given the many apps that seem to play relevance into the plot that go from Spotify, YouTube, Instagram, Dropbox, and even Just Danceapparently and not even doing anything fun with them just as Wreck-It Ralph did with its noted video game cameos. But supposedly its message is all about “being yourself,” which is defined by the “meh” emoji that Gene carries – and it seems all lost against another message telling viewers to consume as much as they can all on their own smartphone.

I’m still trying to piece together how the world of The Emoji Movie works because there’s so much that goes unexplained (why apparently a phone reboot is something to be feared), and soon I quickly remembered that it was because everything had only been made clear as a falsehood. All of this is just a falsehood because we know already that it’s built on a predictable narrative with a clichéd message that kids have probably heard a million times before (“be yourself, and don’t try to follow the crowd”) thus making an apparent social commentary as acknowledged by its director feel hackneyed. It isn’t so much that The Emoji Movieis telling a story, because it isn’t: it’s just going from one place to another and shouting at different volumes to kids in order to find a way to draw their attention somehow – and for older audiences it’ll only come off as annoying because nothing new ever happens.

If Foodfight! represented the lowest of the low in modern day animation when it came down to its aggressive product placement all to go direct-to-DVD, The Emoji Movie will signify a similar damage being done from a major studio along with last year’s Norm of the North. But whereas there’s nothing about Norm of the Northeven worthy of such note, there’s still much harm to be found from the experience of watching The Emoji Movie. If you’ve already had it with bad puns, then even somewhat decent animation can’t save you from the brooding cynicism that goes all around The Emoji Movie, because it doesn’t even seem to have an audience. For the youngest children it seems to alienate them already because of how desperately the film panders to teenagers (and evidently fails), whereas adults don’t have much reason to care. I’d give this movie a “poop” emoji, but given how it wasted Patrick Stewart as such, I think it’ll be easier to represent The Emoji Movie with a “trash” emoji.