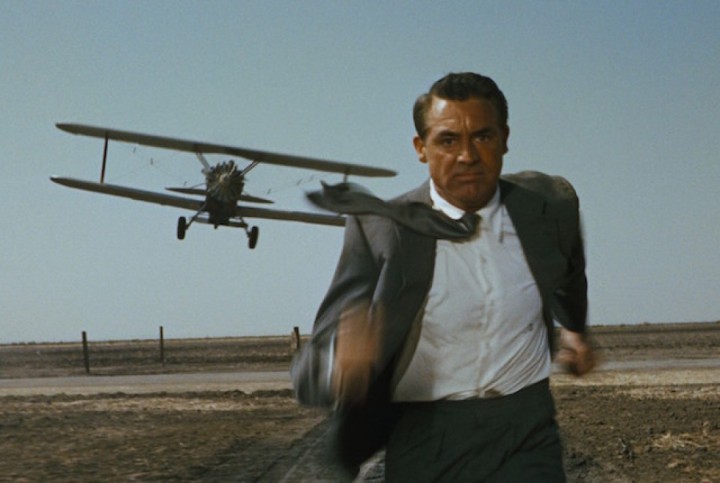 The famous espionage story we’ve already come to know done to the very best of its ability. An innocent man getting himself tangled into a case of mistaken identity, and the quest to clear their own name – something that we can only expect Alfred Hitchcock to make the very best from, and with North by Northwest, he has done exactly that and formed what is without a doubt one of his very best films. But of course one can only count on Alfred Hitchcock to have made some of the most exciting thrillers of Hollywood’s classic era, and nowadays they still wouldn’t lose a touch of what made them exciting to watch during their time. But the case with Hitchcock is that his thrillers haven’t only been the very best of their own genre, for films like North by Northwest only show why he was among the most clever of filmmakers working in Hollywood, he was one of the very best in general.

Roger Thornhill is an advertising executive in New York, taken in by Phillip Vandamm after a case in which he is mistaken for a spy by the name of George Kaplan. He’s an average human being who planned his day out like the rest of us would, only to find himself dragged into a bigger game at large, for now he is being chased cross country under the illusion that he is “George Kaplan,” and a murderer at large – all of which has become the template for many action films to have followed in the years to come. Thornhill is soon joined by a mysterious woman by the name of Eve Kendall, while he still has Vandamm’s thugs on his trial as well as the police after he is an alleged murderer – going all across the country. But for how familiar this story has become within many years, what has allowed North by Northwest to reign supreme after so many years have passed? Hitchcock wasn’t a director who made thrillers exclusively as such, for one among many reasons he was brilliant.

It only occurred to me how well North by Northwest works as a romantic comedy, because of how much humour is laced in when it comes to the relationship between Cary Grant and Eva Marie Saint. On the surface we see a thriller just as we know Alfred Hitchcock was best at making. Hitchcock laces North by Northwest with sexual innuendos that pertain to what is being made of a romance between Roger Thornhill and Eve Kendall, for it’s yet another factor that helps keep the film moving at such a swift pace. Right here it only made clear what I always loved so much about watching Alfred Hitchcock films, they transition between lighter and darker tones with such smoothness (all leading to a rather suggestive note for the ending). One moment, you have a nice romantic setup with Grant and Saint and soon enough everything becomes far more sinister, and then that’s where we get right down to the famous crop duster scene. Only Hitchcock could have made this sort of tomfoolery work as beautifully as it does in here, for it made the mystery feel even more surprising on multiple watches.

The crop duster scene made a case for some of the best set pieces ever to come out from a Hollywood production during the 1950’s. But what’s always made Hitchcock exciting wasn’t how he formed suspense or mystery, it was because of how he was experimenting with the genres in such a work to be so distinctive. Hitchcock wasn’t merely forming a suspense thriller the way we knew him for, but he also crafted an early example of the action film. And even these moments come out of the unexpected, but it’s the circumstances of said moments that always make North by Northwest engaging. Soon enough comes the famous climactic sequence that takes place on Mount Rushmore, but it’s the chaos that Hitchcock is reveling in for said moments that makes these moments as exciting as they are. But with how said scenes play out accordingly to the film’s narrative, it all builds up with the excitement of a James Bond film: for it was often said North by Northwest was “the first James Bond film,” and the best one at that.

Grant and Saint are delightful to watch as always, but it’s the matter to which all of Hitchcock’s trademarks play out in here that allows North by Northwest to remain a standout work. No one can be trusted because of all the secrecy that Hitchcock was about, you’ve got the great MacGuffins coming into play, with traces of humour laced in. But you look at a character like James Mason’s Phillip Vandamm and one’s curious as to why he’s doing what he does, but quickly enough it doesn’t matter. And for as menacingly charming as his performance is, there’s yet another highlight in Martin Landau creating a frightening presence as his assistant, Leonard, further solidifying Hitchcock’s knack for appealing villain characters within his movies. But you notice that everyone is chasing after something in the film, and for as much as it boasts a sense of curiosity it’s the revelation of its meaningfulness to the plot that only shows how cleverly Hitchcock is playing his audiences: in the end, they didn’t matter, but we were still engaged throughout.

But in a sense this all adds up to what easily is the perfect Cold War commentary. And knowing it isn’t completely serious-minded is why it still remains as entertaining as all of the best Hitchcock movies, because there’s no other classification that fits North by Northwest better. Everything comes by at a dizzying rate, all of the set pieces still look impressive to this day, and yet it still engages oneself into the mystery the way Hitchcock at his best has always managed to do. And knowing the sorts of films that Cary Grant would be making during the peak of Hollywood’s Golden Age, he only made it clearer that he was having fun as he kept working and it shows perfectly in what he presents to us in North by Northwest. As far as I’m concerned, this also happens to be Hitchcock’s funniest movie, for it still stands atop many romantic comedies of the era – just as much as it is one of the best spy movies of all time, let alone the best James Bond movie.