Roland Emmerich collaborator Dean Devlin, who had garnered fame from writing Independence Day and the 1998 Godzilla film makes his own directorial debut with Geostorm. Although Devlin was responsible for writing some of the more tolerable entries in Roland Emmerich’s filmography there isn’t really so much being said there and without Emmerich, what exactly is to be expected with half the effort of what gave us Independence Day? Perhaps something more stupid, one that would at least feed off from whatever visuals it can throw at you as a means of hiding an incredibly corny human story – typical of modern disaster films. If San Andreas showed us that this formula wasn’t limited to Roland Emmerich, I can’t imagine thinking Dean Devlin would have done anything outside of such. 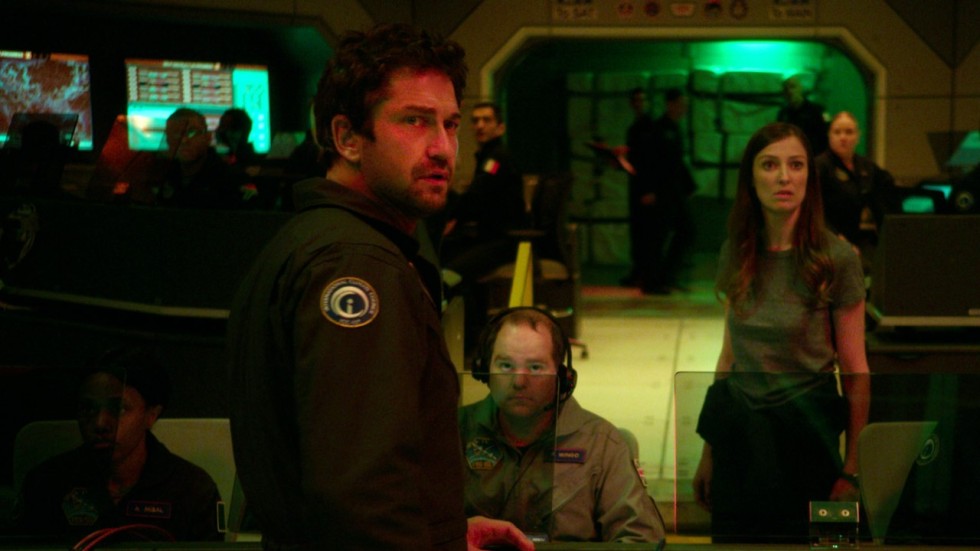 Not too far in the future, climate-controlling satellites have been placed all across the globe as a means of preventing the occurrence of natural disasters. The team is led by Gerard Butler’s Jake Lawson, only to be replaced by his younger brother Max, played by Jim Sturgess. It isn’t too long until something goes wrong within the system and a man-made storm eventually begins to threaten the world, but this supposed “malfunction” turns out to be a plot to commence mass genocide across the globe. It is hard enough for me to type out a synopsis without trying to make it sound ridiculous but considering the title I think it is only safe to say that considering the film is titled “Geostorm,” this is really the most that can be said about describing what the film seems to be aiming for.

Geostorm is a bizarre sort of failure, because it moves along in the same way you would expect any modern disaster movie to play out. It throws a lot of political and scientific babble at you together with troubled family relationships and romances, when you’d want to be sticking around to wait for the mass destruction to take place. Normally on the count that space shuttles can travel between Earth and a space station in a few hours almost like an Uber, you’d want to turn your brain off but the more you expose yourself to Geostorm you still recognize the stupidity coming around in more elaborate ways, it seems so strangely alienating just watching Geostorm. For all you know, the scientists and the government officials as well as their loved ones are going to remain safe whereas thousands of innocent civilians will be perishing in the background. But all the sentimentality is directed at family relationships like Gerard Butler and Jim Sturgess playing brothers, so everything is fine I suppose.

In spite of what the film’s title would promise, barely any time is spent on the natural disasters themselves for the most we get of that are just glimpses of the “geostorm” becoming even more powerful as they destroy certain landmarks all over the world whether it be Rio de Janeiro, Moscow, Dubai, or the United Arab Emirates. They’ll be hit with a tornado, a tsunami, a deep freeze, or a heat wave but their moments don’t last so long even the visual effects work seems underwhelming. As a matter of fact, considering the film promises that a global storm is threatening to destroy the world, it seems there is no reason to care if no one major gets caught within the destruction aside from two scenes, and the closest we get to such is only a countdown before the “geostorm” takes place. We barely have any “geostorm,” just mass destruction of landmarks because that’s all that is required to sell a modern day disaster movie.

Amidst the general lack of believability present regarding the general execution of its premise, Geostorm is at its funniest when it takes itself incredibly seriously to the point it tries to become a political thriller. Noting how all of the storms were supposedly intentional as a means of performing mass genocide, the villain’s motif already seems unbelievable enough when he also happens to be putting himself in danger. Everything is shown to us with a straight face as if it would actually happen, yet we still find it easy to recognize the ridiculousness of the overall story because it isn’t even trying to tell a story, it tries to throw in as many allusions to how evil the government is amidst a crisis like this – as if it seems desperate for relevance because we know already they’re going to survive as many innocents will perish. It all made for an amusing chase where a destructive thunderstorm is being outrun, and that’s about it.

Geostorm is ridiculous, to say the least. But if you’ve already seen a good amount of Roland Emmerich’s filmography you would know what to expect because it definitely feels like a product that he would be watching over. It isn’t even trying to tell a story, it’s clearly made for the big spectacle present as storms will continuously destroy landmarks that we recognize, and then the film throws a joke or two but it doesn’t elicit the expected reaction, it just seems tacked on. So basically, Geostorm is a Roland Emmerich film that wasn’t even directed by him. Or at least it’s half a Roland Emmerich film because of what we know Dean Devlin had provided for him. But I don’t even know what more can be expected of a film that tries to take a concept of a storm taking over the world as an apparent political thriller correlating to mass genocide, led by troubled family relationships.