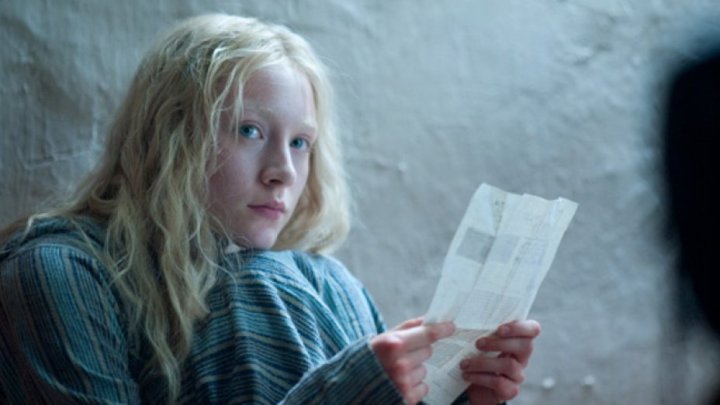 Joe Wright’s films come off to me as the sort that show off whatever is possible without offering much beyond that. I remember trying to watch Atonement for a history class and I was struggling just to stay awake, and his Pan film was just about one of the most awkward experiences for myself (I think the anachronistic soundtrack was already jarring enough whether it be the inclusion of Nirvana’s “Smells Like Teen Spirit” or the Ramones’s “Blitzkrieg Bop” that gave everything away for me) – and yet I find Hanna strangely enchanting. Quite frankly I also remember it as the first time I had seen Saoirse Ronan in anything, and her performance here was enough for me to say that Wright had opened me up to what seems missing from the action genre in this day and age. She doesn’t hold back and it only creates something all the more tense in Hanna.

Saoirse Ronan plays Hanna Heller, a sixteen-year-old girl who was raised by her father Erik (Eric Bana) in Finland to become an assassin. But Erik’s past as a former CIA operative comes to haunt him when senior officer Marissa Wiegler (Cate Blanchett) seeks to eliminate both of them. Separated from her father, Hanna embarks on a quest to find meaning to her own life as she is also searching for her own enemy. The premise is very straightforward but it also makes Hanna difficult enough to categorize as is, because it presents us a coming-of-age tale in the form of revenge. But the very mystery that Hanna creates from here is what makes it so beautiful, especially when you put it next to most action fare from the past few years or so.

A lot of the charm from Hanna drives from the fact that it feels like a fairy tale. When you take into consideration the symbol presented by a Grimm fairy tale that Hanna reads, it also shows a perfect reflection of the sort of person that Hanna has grown up to become. But it isn’t merely Ronan’s Hanna who helps in creating the metaphorical fairy tale that we have here presented as a cat-and-mouse action thriller, but Cate Blanchett also comes along the way to present a wicked witch figure in a cold, yet hypnotic performance as Marissa Wiegler. Within no time, Hanna becomes a distinct morality tale. But how a straightforward narrative manages to mix this, a coming-of-age story, and a road movie all at once while remaining an action film at heart – to say the least it is out of the ordinary. We have an odd mix of tones in here but strangely, it just works without issue.

To talk more about the straightforward nature of Hanna, it plays out in an oddly subversive manner too – for many action films we can recall have as much as one goal, for the hero to kill the “bad guy.” The moment when Hanna ends almost feels like a clever means of deceiving where expectations can go because of the fact that it still retains this goal, so much to the point that once it is done – that results in the fitting end for the movie. It is fitting enough because we know that we have stuck around with one story for a period of time, any action film can go practically anywhere once their goal has been achieved and Hanna has nowhere else to go. All we are left with asking ourselves is what use does Hanna have for everything that she had learned, perhaps there may be no more need for violence in this world after what she had encountered or maybe her skills can be used for the greater good. It’s an intriguing case study that Joe Wright leaves us with, because the growth of Hanna’s character arc isn’t only one of the best of its sort, it’s another story in itself as mentioned earlier.

Like many of the best action films in recent memory the editing, choreography, and pacing all work in Joe Wright’s favour. He doesn’t particularly do anything to reinvent the genre, but it created a bizarre mix of tones that just seems to work so perfectly. For it fits enough to create a brisk action film the way that the best of the genre should be, but also to form a new experience in and of itself. Add the soundtrack by the Chemical Brothers and what you’ll have is a perfectly energetic thrill ride that only reminds you of all the genre’s best qualities. For as much as Joe Wright isn’t doing much to reinvent the genre technically, the fact that it all moves perfectly in his own favour is what makes Hanna entrancing.

Joe Wright and Saoirse Ronan aren’t the ideal director and star that one would have for an action film, and the film’s extremely straightforward yet symbolic narrative even less so – but strangely Hanna works beautifully. It just works well enough as is because of how much the film manages to carry upon its shoulders whether it be the growth of its lead character or its fairy tale structure. As far as many modern action films go, Hanna is arguably one of the most underrated – for it carries all the best elements of the genre while also presenting much more thoughtful on the inside. Hanna never missed the heart, it just hits straight on a first shot.