This is arguably director Steven Soderbergh’s finest hour in Hollywood, not only because it is the film for which he had finally won a Best Director Oscar, but alongside Erin Brockovich it helped him break into the more mainstream territory. But even as we talk about how it only continues to make him one of the most fascinating filmmakers of his own kind, it’s also amazing to think about how this film does not allow confine itself to the conventions of popular cinema at the time, because it also feels like a film that breaks down against the very system which even allowed it to get made. Soderbergh, having already established a firm ground for himself starting up a new movement of independent filmmakers with sex, lies, and videotape, has also found himself stretching beyond normal once again in a film about the drug trade. 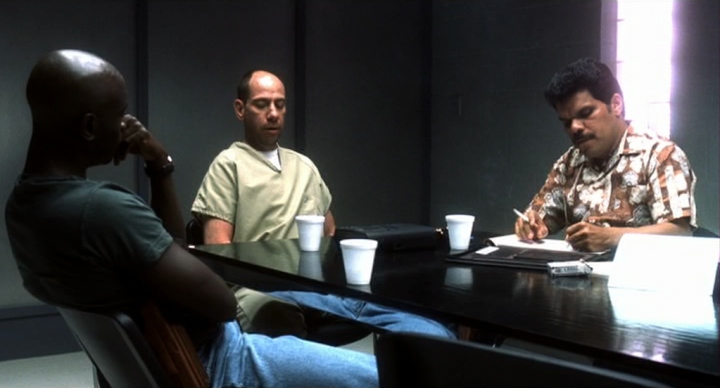 Traffic tells three distinct stories, each of which is colour coded by the cinematography. The first that we see is set in Mexico and stars Benicio Del Toro as police officer Javier Rodriguez. Soon enough, we are brought over to a second storyline tinted with blue, centering around the conservative Ohio judge Robert Wakefield, played by Michael Douglas, as he takes on the title of the drug czar despite warnings that the War on Drugs is unwinnable – despite his daughter’s own secret addiction to drugs as the result of her boyfriend. A third story set in San Diego, stars Don Cheadle and Luiz Guzmán as DEA agents who arrest a drug dealer that ends up leaving the wife of his boss (Catherine Zeta-Jones) to discover the true nature of his profession. As Soderbergh splits these stories to form a singular story about the drug war, it reflects a greater chaos that only would be the very nature of a conflict that would never be resolved as easily as suspected.

It’s impressive to think that this would be given a wide release at the time because it feels like a distinguishably radical movement against the society that runs it, because Traffic is not merely a film that covers the drug war but rather a film that captures the very nature of the war. In this case, there’s no clear line between who would gain your trust and who would not, because that’s the very chaos that the conflict would place yourself within, and that’s the most impressive thing that Steven Soderbergh captures in Traffic. He is not one to allow his anger against the system for their own lack of progress, as shown within the storyline involving Douglas and his daughter who is only falling towards the addiction herself, but makes clear his failure to comply with his own position of power. Juxtaposed alongside the story of Javier Rodriguez amidst the corruption which he encounters as an officer of the law, something far more topical is on the rise.

Covering the topical nature of Traffic would be another challenge to face, as this is a hard-hitting political drama that has clearly not lost a touch of its relevance even to this day. It has not lost a touch of that because there’s clearly a lack of responsibility from power that does not only run present within how they handle the War on Drugs. It puts those who are unsuspecting at risk, thus giving the film the feel of a thriller. But even if said genre convention can best describe Traffic, it still doesn’t unfold itself in the way that a typical Hollywood picture would, because Steven Soderbergh’s own lack of interest within said system still makes itself perfectly clear. But as if the film could not have been any madder at that, it also reflects a far more harrowing truth, because at its conclusion we don’t only have a most fitting ending for our “heroes,” yet a glimmer of hope is present; effectively capturing the cyclical nature of an unsolvable conflict. It starts off bleak, yet stays bleak and keeps oneself engaged.

But beyond how the film is edited, it would not have been possible without the script by Stephen Gaghan, for it is a script that so smoothly places oneself within the scope of the situation by keeping everything so restrained. It isn’t merely a film about who to trust within the war, it’s a film that tests how our morals are challenged if we end up getting ourselves unwillingly caught within a cycle and how even the best in people would find that about themselves being broken. The effectiveness of Traffic comes from the fact that it is a story of broken people as they are only losing their hope because of the unsolvable – and yet Soderbergh never keeps the film so wholly miserable. It’s perhaps the best approach that one can carry when they take on a film much like Traffic, and also becomes an exercise in humanity regarding the performances whether it be Michael Douglas or Benicio Del Toro (the latter of whom I believe to be the best performance in the film).

What will never not amaze me was the fact that this was a film that was released by a studio at the time because Traffic is such a radical film for Hollywood’s own standards. It’s radical in the sense that it is so angry at the cyclical nature of our treatments of world issues, by only saying that we would move forward yet as the film goes on, it only indicates that more damage has been left behind. But as the film ends with Brian Eno’s “An Ending (Ascent)” on the baseball field, a glimmer of hope is still present. It is so vague, because of the very bleakness of Traffic, but because of how it all starts so small, it only makes clear how each story’s contribution would only shake things up for another on a bigger scope. Traffic is an angry film that only has grown more in that sense today, because these conflicts only put human lives in danger and yet nothing is done about it. As so many lives are lost, no one gets away with a clean record.

All images via USA Films.