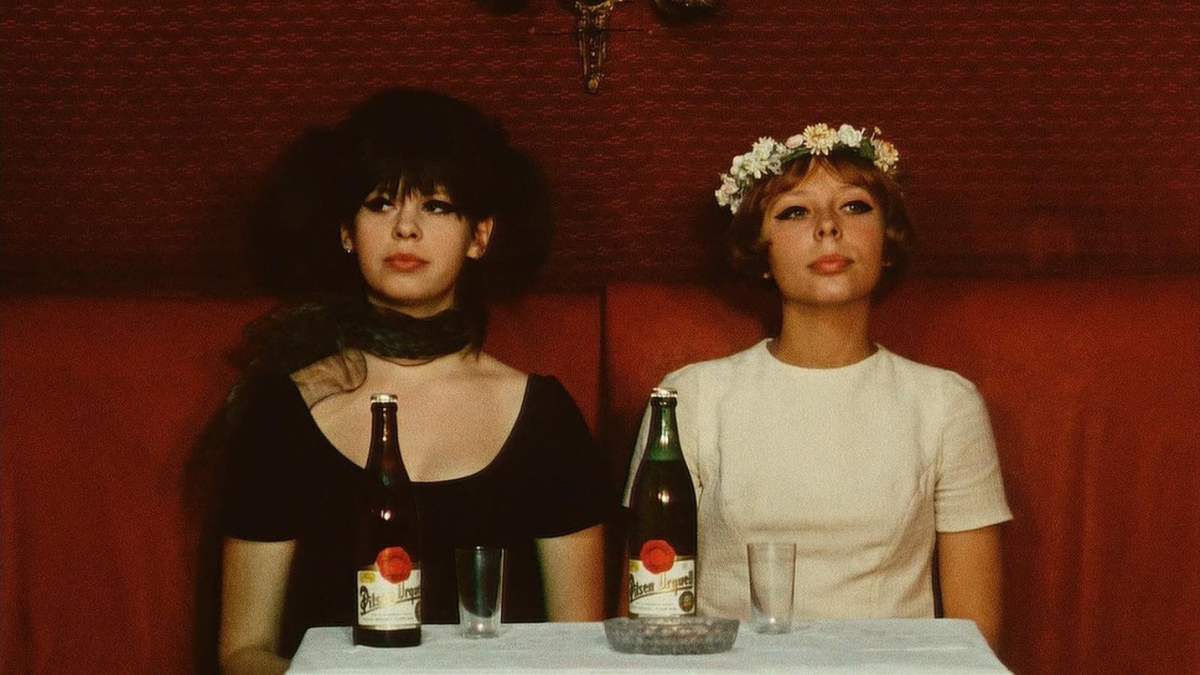 A film that moves freely without any direction, almost like the way it sees our world is developing day by day. This is a film that deliberately angers your senses, because it represents anarchy in our world as we know it to be. This is a maddening film, but it also makes a clear case as to why film is one of the most meaningful forms of activism that we have on the planet. Vera Chytilová’s Daisies is one of the peaks of the Czech New Wave, because it just shows everything that the movement represents in the most freeform manner possible. But even as Daisies was the subject of controversy, the film itself already seemed to come up with the perfect rebuttal to that very notion and that there only makes a case for why it remains one of the most fascinating pieces of 1960’s cinema ever to have been made.

When you read a basic synopsis of Daisies, for some it may be easy to think that it could easily have become any old coming-of-age story about spoiled teenagers. There are two girls who are both named Marie, they decide that the world has become spoiled so they will become spoiled themselves. As the two of them embark on another journey that consists of strange pranks coming one after another, they slowly come to discover far more about the world in which they inhabit – and what Vera Chytilová managed to craft from this freeform experiment was also one of the most anarchistic pieces of cinema ever created. Daisies is not a film about nothing, it is a film about class and sexual inequality – and one of the angriest films ever to have been made about the matter at hand.

Controversy is no stranger to the making of Daisies, for the film had only been made two years prior to the Czechoslovak’s Prague Spring. Chytilová had been banned from making films until 1975 but the film’s legacy had only found itself growing for good reason. Tackling the bourgeois societal standards of its own era, what’s most stunning about Daisies is the fact that most of this still rings true to our time. The girls who play Marie can be annoying in their roles, but in the many pranks that they all take part in, it all plays back like our own annoyance with governments and their lack of willingness to move further from the damage that they have caused. These girls encompass how we see those of a higher class to be, because it all comes from how they see the world to be, and therein lies the most enticing aspect of a film like Daisies.

As far as the film’s feministic nature goes, what keeps Daisies moving is how radical it remains from start to finish. It goes to the point that even by the time the film is over, you still have that very feeling inside your head that nothing is truly over yet. This is a film that effectively teases male desires because it so evidently despises the inequality that women have suffered in society and from the phallic imagery. This is a film that teases the male gaze every opportunity that it has, even making a fool of it from the way that the two of them handle a phone conversation between a male lover. In this same scene, numerous phallic objects are being cut up in order to signify the hopelessness of the male lover, as both girls stick around making fun of his own lack of an identity. But neither girl needs a lover to find the satisfaction that they acquire within their lives, because Chytilová only shows in this very sequence that such conformity only takes away from being able to form your own identity because that’s what society expects of everyone.

This is also without doubt one of the most colourful films ever to have been made, but the way in which Chytilová changes the colour template only comes by to serve as a perfect reflection of the film’s anarchistic nature. In the most colourful scenes you would have some of the funniest moments, whether it be the noted food fight scene or the phone conversation, but in another scene with a different template toned to one specific colour, another mood comes forth. In a blander template you get a chance to look at what the girls are expected to behave like, and Chytilová still allows their playfulness to go ahead and run amok. It’s funny in the sense that it represents how we would imagine the bourgeois ruling would function, and it’s also irritating because you expect that to change and it only ends up stinging even further from there.

You ask yourself watching Daisies if anything ever really ends. There is no answer to that, with how Chytilová just embraces the playful nature of the girls. But it’s so aggressive in asserting its own identity as the film only jumps around from place to place, like the very meaninglessness of the world that the girls live within – especially with the inequality that drowns them as made clear from the final sequence. Daisies is a film that only seeks to find beauty inside a world that only expects conformity, turning such identities into literal trash. This is a film that challenges how the world around oneself expects itself to function and it’s only managed to age spectacularly over the years where the controversy had sparked since its release. And to think, all of that controversy came forth from authorities that think they have power to decide over what others should find fun, surely that doesn’t bite something familiar, doesn’t it?