At the age of 29, what director Steven Spielberg created with Jaws was not just one of the most recognized blockbusters of its era, but he also changed American cinema the way that we all knew it to be. But amidst the many monster movies that have followed ever since Jaws, it has still managed to stay afloat (pun intended) for not only is Jaws significant for having established the birth of a new movement in cinema but also because it has only aged like fine wine all these years. You can go ahead and say what you will about the shark looking fake (years of rewatching Jaws may have made that clear for me) but in the end, does it really matter? The very least of what makes Jaws such a successful piece of work is whether or not that shark looks real or not but rather how perfectly it all builds itself up to become; and on that count it quite truly is the quintessential blockbuster. 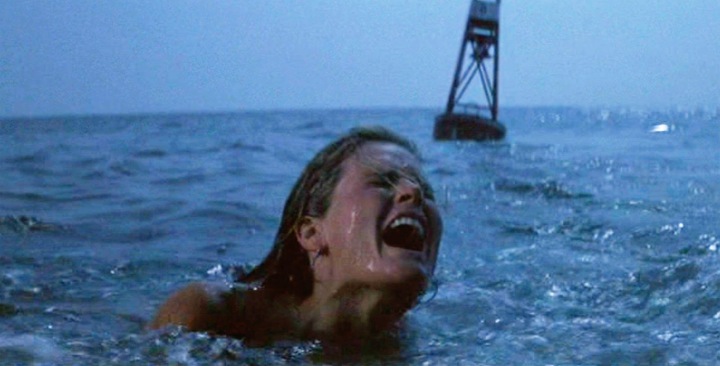 The film opens fittingly, with an underwater shot that we are led to believe comes right from the perspective of the shark. Soon enough, the film takes a fitting turn where a skinny dipper ends up getting devoured by the creature, and an investigation led by police chief Martin Brody (Roy Scheider) goes underway. The first shot alone is enough to create the perfect atmosphere for Jaws, which mixes together with John Williams’s score in order to rack up the very feeling of unease that an unseen figure can present – because Jaws isn’t a film about the shark. Jaws is a film all about buildup, in order to capture the very paranoia that something is there in the water, as if the foundations of what is also the perfect monster movie can’t ever be put any more perfectly into place the way that they are.

But when Jaws spends its time developing the human characters, the best part about it is how each and every relationship is all set up. Chief Brody is our protagonist and all he wants for the people of Amity Island is for them to remain safe as he knows tourists are coming to spend their time on the beach for the summer. But with every shark attack that comes by, the mayor of Amity Island only cares for the tourist revenue and wants to establish a good reputation for the town. There is no character that ever feels like a mere caricature, but the very beauty of Spielberg’s creation is how it functions as a character piece. As every motivation comes together, it helps in making the hysteria all the more believable, because you already feel that very paranoia of going in the water again.

Spielberg lets his audience visualize what the shark looks like by only merely teasing his appearance, giving every attack the feeling it is coming from an unseen entity. There is no other motivation present for the shark to continuously prey upon the beachgoers at Amity Island, but we only assume that it is hungry enough to devour a human being and that alone is enough for Jaws to set itself moving. But as the attacks come back all the more, Spielberg doesn’t disappoint when he actually lets you get a glance at what the shark actually looks like. There’s no disappointment because it has always felt present everywhere you looked, even as the characters were far away from the water, just as a perfect monster movie would only manage to create; these are not “monsters” that are bringing on their reign of terror onto numerous people but rather forces of nature.

How does Steven Spielberg manage to set up Brody, Quint, and Hooper all to create the perfect team to hunt the monster? Each one comes onto the screen at the perfect moment and he spends enough time with all three of them in order to establish another perfect bond. When introduced, they present themselves as being caricatures (Quint scratches a chalkboard with his fingernails and presents a beat down image in order to make clear the state of his life, whereas Hooper shows himself as being overeager to analyze the details of the shark) but in the best sense, they all feel so ordinary and they aren’t only fighting against a shark but against another system at large: headed by the mayor of Amity Island who only cares for the tourist revenue rather than the public’s safety. A clear moment of how ordinary they all are only exemplifies the film’s power when they all drunkenly sing together after Quint and Hooper show off their scars, already having set up a wonderful chemistry between three different sorts of people.

Jaws isn’t only representative of the very best in blockbuster filmmaking but some of the very best in American cinema as a whole. As straightforward as Jaws may play itself out to be, sometimes that can already find itself at the best way in order to tap into the fears of audience members, because an emotionless killing machine preying on unsuspecting beachgoers can also be representative of other greater fears within the human mind. This isn’t a film that only limits itself to being merely about the shark nor even the hunt for the shark in order to ensure the safety of the townspeople, it’s a film that captures America’s own hysteria at the time; proving already that such films are far more than being escapist experiences. For as much as Jaws beautifully excels in being both terrifying and heartfelt in equal measure, what truly keeps Jaws afloat is how exciting it has remained all these years for it represents only the best in what blockbuster films can accomplish and stretches beyond that, creating memories of growing up with the movies in the process as generations pass by. As Brody would say, “You’re gonna need a bigger boat,” and I would like to think that Jaws is that bigger boat.