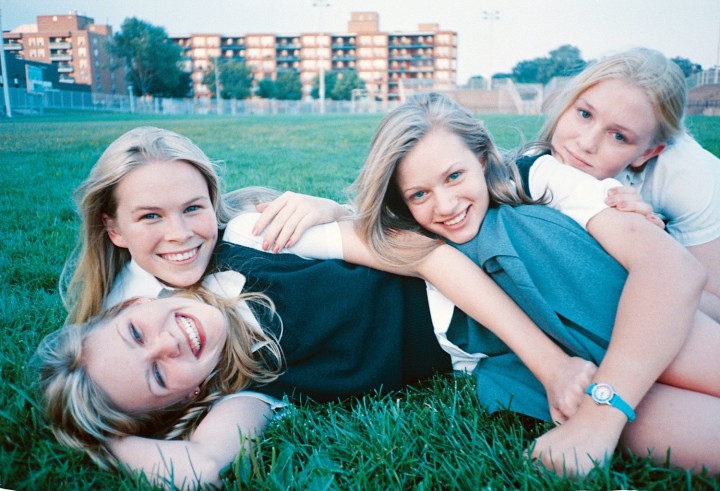 Sofia Coppola’s directorial debut The Virgin Suicides is a teen film with a dreamlike quality that is so rare for the genre, but it is within this quality alone where you have a directorial debut so fully realized it’s difficult to even believe that it was a first feature. Though to talk about what it is that this movie manages to accomplish as a teen drama, everything starts from the way in which it is structured – for it plays out like a fantasy in order to emphasize one’s perspective that understands circumstances like a mystery. In telling the story of the suicides of the Lisbon sisters, who have been loved by a group of teenage boys for obvious reasons, there is yet another dimension to this story that only a director like Sofia Coppola can bring to the table that would also make this one of the best teen films of the 90’s, let alone ever. As Sofia Coppola frames this as a story about teenage obsessions and how they affect the way we grow, what she also shows us in The Virgin Suicides is a darker side of growing up that is so often misunderstood by the images that have been set inside one’s head.

In the opening scenes of The Virgin Suicides you can already get the idea that this all feels like it is being told from memory with the narration of Giovanni Ribisi, first uttering, “Cecilia was the first to go.” Before that, we already have an idealized teen fantasy shown to us in the form of Lux Lisbon, played by Kirsten Dunst – a teen favourite during the 90’s and early 2000’s. From this alone, the male perspective is being emphasized because in a girl like Lux Lisbon, all that they see is perfection within an equally perfect suburb, and then the abrupt cut to an attempted suicide attempt by the youngest of the Lisbon sisters, Cecilia, is shown. It is the first thing she tells the doctor that already sets the mystery into place, “Obviously, doctor, you’ve never been a thirteen year old girl.” Told from the collective perspectives of a group of boys who fantasized about the girls, The Virgin Suicides finds itself built up so perfectly right from the way each of the sisters are described to the audiences.

The mystery that is being put into place is understanding why the girls have all taken part in the suicide pact the way that they did, but what was the calling for help that was out there this whole time for the sisters. It was one that only the girls themselves could understand, because the boys’ perspectives were only enamoured by the fantasies that the girls would leave them with. In the narration you can hear a sense of insecurity running through them, for they are still trying to put together the pieces of the puzzle as to why they all committed suicide together, but also in the guilt that they did not understand their motivations for as much as they got along with them during their prime time. Jeffrey Eugenides, who wrote the novel, had envisioned that these girls were entities as opposed to actual people, feeding into the fantasies of the boys – but Coppola’s understanding of the girls as being human beings is shown to us from Cecilia’s first moment on the screen.

Masculinity is another element that is put into question in The Virgin Suicides, first from the way in which Sofia Coppola frames this story as being under the male gaze. Being emphasized from the way in which the narrator describes the girls as being perfect but are also passive figures who serve to their own fantasies, thus ignoring the girls’ sense of interiority. But because Sofia Coppola keeps this perspective in the light, you end up feeling more of the female perspective which is important in telling a story of this sort. You hear their cries for help, especially inside of a world that silences their independence and shuns them for it. You hear the cries of the Lisbon sisters living under the rules of their authoritarian parents (played by James Woods and Kathleen Turner), but never were they answered. They were never answered because nobody heard them at the time, and by the time the pieces may end up having been put together, it was already too late.

Sofia Coppola also plays along a sense of role reversal with telling this story and it’s clear from the dreamlike storytelling whether it be the narration or the framing from memory, because it builds up the male gaze to such an extent you feel their obsession for the girls pervades the film and yet the male narrators who center the story are never nearly as identifiable as the girls are, with the exception of Trip Fontaine. The neighbourhood boys, who narrate this story from memory, are often in hiding and never share much with people outside of their circle. Trip Fontaine, who is played by Josh Hartnett on the other hand, is known for being the school’s heartthrob and has his eyes set out for Lux, thus highlighting what has made the boys’ desire for the girls damaging. One would already know what is typical of the male role in this scenario, but in how Coppola’s perspective puts the female lens into the spotlight you feel pain coming out from the girls – often overlooked by others for their own interiority has remained isolated from all else.

When you think about the circumstances of the Lisbon sisters from their points of view, you already see that their lives are pained by the conservative standards that society has set for themselves. This is not an environment in which the Lisbon sisters know that they can grow up within, for the story that Sofia Coppola is telling is all about their cries for help. Their parents are so devoted to their religion that it has only made them more authoritarian around their own household, only suppressing their form of sexual expression thus giving the film its title, “the virgin suicides.” They cannot come of age under these circumstances, because they are not allowed to. They know already that this is harmful for their own growth as human beings, and Sofia Coppola understands that. It is this sense of understanding that allows the pieces of the puzzle to come into place and what it is that makes The Virgin Suicides so great is the way in which it makes you take in what it is that they are experiencing.

I think the most frightening aspect about how this mystery has affected the way in which this group of boys has grown is the way in which everything moves on like nothing has ever happened. The traumatic experiences still manage to find a way to linger within the memories of the boys, only being able to see the surface and remembering them in this certain manner rather than as other people, much like themselves. But everything so wonderful about this film is built upon how it plays back like a dream, because you know it is still a thought that haunts you but you never understand why until the pieces really come together. I know for a fact that upon my first watch, it was never easy for me to put them into place, but coming back to this more often only makes it so much more heartbreaking upon thought. Everything about this film, from the cast, Kirsten Dunst and Josh Hartnett in particular being at their very best, to the aesthetic, and the soundtrack by Air – I don’t know if I can ask for more out of The Virgin Suicides. It is a film that is every bit as psychologically complex as it is dreamlike, reflecting recurring traumas that damage innocence on both ends of the story.