The first Incredibles film is one of my favourite Pixar films, and it was one that begged for a sequel the moment it had ended. But given Pixar’s track record with franchising their own films (the only film with connections to preceding films to have really made its mark on me being Toy Story 3), it was also easy enough to be skeptical of what the results of Incredibles 2 would be. However, knowing that Brad Bird was going to be returning to write and direct, having wanted to develop a sequel to the first Incredibles film ever since its release, I already had hope despite knowing how much time it would take for Brad Bird to direct a sequel that he knew would deliver what audiences would have wanted to see in the many years of waiting. And if anything else were to be said about how the wait had paid off, Incredibles 2 may not live up to what the first film had set out for, but it is nonetheless a worthy sequel to possibly the most inventive superhero film to have come out in the past decade. 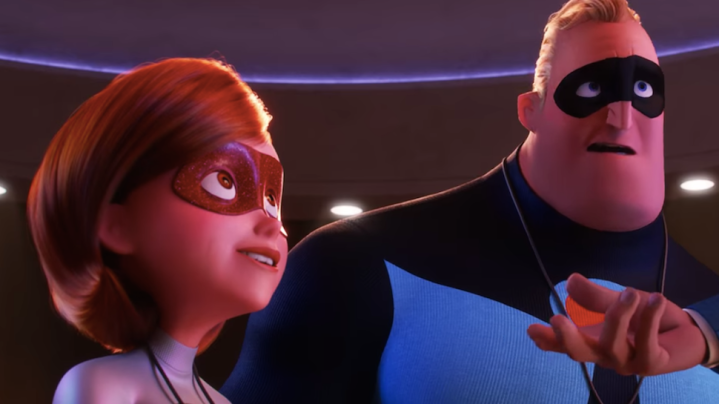 Taking place soon after the events of the first Incredibles film, the focus has been shifted from Mr. Incredible to Elastigirl as she is being called over by a wealthy entrepreneur who seeks to legalize superheroes once again. While Elastigirl has her own chance to relive her glory days, this leaves Mr. Incredible with a more difficult task than he had imagined, raising his own family. Akin to the first film, this is a film that revolves around how this entire family of superheroes still tries to remain intact through human instinct, but seeing as Bird managed to find a way to apply these traits to a nuclear family, it doesn’t only feel like a fresh take on the superhero genre in the same way that the first film had done so, it feels like a unique perspective upon looking at family dynamics and all of the ups and downs that come along the way.

It was always difficult to come up with what truly would be a perfect sequel to the first Incredibles film, and even Bird knew this; thus the long wait would have been inevitable in telling a perfect story that would follow up the stakes that the original film had carried. But Brad Bird doesn’t let those limits get in the way, for even if this film still presents itself as being somewhat predictable right next to the first film, it’s admirable just knowing that he still manages to present everything to create a strong landing. I say that because at his best, Brad Bird only ever finds himself able to set up a perfect tone for the stories that he was trying to tell and as he seeks out to refresh people on what it is that they had loved most about the first Incredibles film, nostalgia may have been inevitable but so is the thematic resonance that allowed it to stand so strong.

Among many things that I’ve always admired about the first Incredibles film, I’ve always admired how the politics of its own world still have their own real-life ties and here’s a chance for Brad Bird to explore how they truly feel for the whole family of superheroes. It was only fitting that so soon after the first film, we had a film all about how they try their best to cope with the fact that their lifestyle is still illegal. Sure, the first film had already been built upon how Bob Parr misses the fact that back in his time, he was still in the spotlight, but here is another film that builds itself about how trying to live a lifestyle like what the society believes to be an “ordinary” civilian feels repressive – and by shifting the focus onto Elastigirl, you already find a better picture of how it feels from this perspective for she already feels like the perfect face to lead the way. In the previous film, she remarked she didn’t want to leave the saving of the world to the men in the intro, and here’s where she has a perfect opportunity not only to save herself but her whole family in the process.

Not that it should be any surprising, but as per usual for Pixar, the animation is stunning. Pixar has never found themselves any brighter nor more pulse-pounding than they have with the first film’s action set pieces and it’s only fitting enough that with Brad Bird returning to direct, they only retain the same excitement that allowed the first Incredibles film to thrive as it did. But here with how Brad Bird manages to mix that same energy into both the exciting lifestyle together with the comedy of Bob Parr being overcome with mundanity in raising his children, to discovering more and more about Jack-Jack, it’s stunning how Bird keeps both sides of the story as engaging as one another in order to build further upon the universe that he had already established. It’d be easy for some to say that perhaps as CGI animation has become more advanced in the years since the first Incredibles it looks better, but I think the most important thing to consider is the fact that it still retains the same charm that made the first film move swiftly.

Fourteen years of having waited for an Incredibles sequel had paid off far more than I would have asked for, especially after a string of disappointing Pixar sequels one after another (not counting Toy Story 3). It didn’t need to be every bit as good as the first Incredibles film but years of having wanted a proper return for these characters to the screen especially given the way in which the first film had ended only paid off magnificently when we already knew it had been calling for a sequel. And what more could you ask for out of an Incredibles sequel than just to see the world in which the film inhabits only being explored all the more, with your favourite characters returning for perhaps what may be a greater calling on their own ends? This isn’t a perfect film, but it felt very satisfying.