Brad Bird’s second animated film for Pixar may not be an action-packed ride in the same way that his previous animated films were but knowing what it is that Ratatouille stands for, it’s hard not to love the sort of experimentation that it sets out for as far as the work of Pixar has gone. But of course being the Pixar apologist that I am, I can’t help but find myself being brought into a whole other world when looking at the beautiful animated backdrops being utilized to their very fullest and Brad Bird’s touch also helps in setting that into place with Ratatouille. In coming back to the familiar and backhanded criticism that animation is recognized as being geared primarily towards children, Pixar’s films have always found a way to resonate with adult audiences over the years but in looking at the story that they are telling in Ratatouille perhaps something more is coming along the way. In this story of a rat who is doing everything that he can in order to become a cook for as unorthodox as it is, we have another tale about the way art impacts others – something that is only set to resonate with viewers of all sorts. 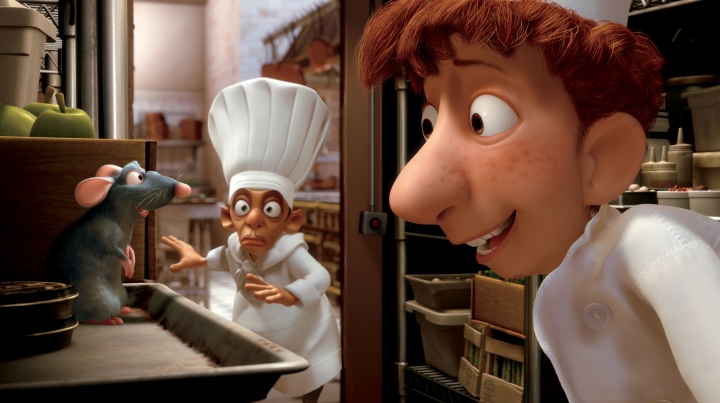 The basic idea of Ratatouille is a simple enough one, it is set in France and tells the story of a rat named Remy, who is voiced by Patton Oswalt. Remy is an outcast among his own colony of rats, for as much as his own clan works themselves around stealing food that humans leave behind in the trash, he has different desires as he wants to become a chef akin to his late idol Auguste Gusteau (Brad Garrett), despite the reputation that rats have earned in a common household as pests. But in this tale of a rat unlike the rest you also have another adventure coming along the way that builds itself around the concept of artists and the lengths to which they go in order to share it with others even if it may go as far as gaining the trust of another person who works at the famed Gusteau’s restaurant that lacks Remy’s own talent in order to pass it forward to more lucky patrons – for in sharing these creations with the world will come yet another adventure to help him build his own name.

It’s not hard to see why Ratatouille just works so perfectly for what it does, because it is a story that drives itself the same way that we feel Remy’s own drive through life – one through an unbroken passion that never gives up no matter how much the world around himself tries to convince him that nothing is possible. In what this film is celebrating you already find a wonderful testament to artists and what lengths they go to in order to make sure that the world can experience their own work for themselves, but in how Brad Bird tells this story you can already feel that it is sure to resonate with viewers of all sorts. There’s always a spark of creativity in someone else that dedicates their time to art in one way or another, and of course it its own celebration of this only makes for one of Pixar’s most delightful.

When you have the idea of a rat with more human interests compared to the rest of his colony, it already sounds so absurd – and of course Brad Bird adheres to that. Yet in creating a character much like Remy, you also have a personality so relatable, only to be made even more vibrant by the voicing of Patton Oswalt. For some he can relate to the dreamer or the outcast in a group of people for even though his kind has already attained their own reputation as pests who steal food from the common household, but talent is always bound to be born out of the extraordinary – something that breaks the norms of what would be expected of a certain image society places over oneself, because the same voices cannot be around to provide everything good for the same old audiences. But with all the constraints that come along the journey to share your own work with the world around you, it’s the fact that Ratatouille only remains so compassionate for those voices that keeps it so wonderful.

Of course the delights never stop there because as per Pixar’s own usual standards the animation is stunning to look at, but the way in which Ratatouille builds up the parallels between the human world and the rat world is still a sight to behold. With the human world it should be easy enough given its setting in Paris but even the rats live a unique world of their own, living life like humans yet never actually being that – made clearer by the fact that you already have a scene in which Remy and Linguini discover each other’s resourcefulness, where they see their own differences and try to work with what they have (something that would then lead to one of Pixar’s own funniest sequences where Remy is trying to control Linguini like a marionette while blindfolded, just as physical comedy was already a known commonality even for the French). But even in the background details you still have Pixar’s own world-building remaining as impressive as it has always been – from the little details like Remy own having his own shot at cooking for the first time or his own discovery as to where he is.

Pixar’s films have already made a name for themselves as being critic proof, but even in Ratatouille you can already feel a sense of humility from the critic caricature that would be seen traditionally as an antagonistic force on the film’s behalf. Of course, the film is all about the appreciation of art, but even in its own critique of the stereotypical image of a critic as painted by the general public (heightened all the more by the fact that Anton Ego’s reviews are enough to make or break a restaurant akin to how a review can make or break a film if it carries enough influence), you still feel a sense of humanity beneath the cynical shadow that he casts over an entire industry of restauranteurs all over Paris. His own appreciation of food has also become the one thing that would eventually make him so cynical in life, but like those who appreciate art, there’s always something that causes a spark in memory that revitalizes the inspiration that brought them to such a position in the first place – something that shows all the more when you listen to Peter O’Toole’s own voice.

Ratatouille isn’t only one of Pixar’s best films but it still remains a treasure in the world of animation simply because of what it stands for especially in the whole world of artists and their own dedication to the craft. Even in characters who ring with the visible traits of being stock you still find something so well-rounded out of them, but for a mainstream animated film reaching out for kids, you can still find that Brad Bird is seeking to expand that reach and create something that will be sure to touch the hearts of many more. It’s not uncommon for Pixar films to show another sense of maturity on their end from this alone, but if there’s anything that it does show so clearly, it’s already clear as to why they have only managed to retain their appeal in the many years to come. It’s beautifully animated, but in the little cracks you still find yourself laughing and with a knack of inspiration, for what you have in Ratatouille is a work of art that pays its own dues to that process.