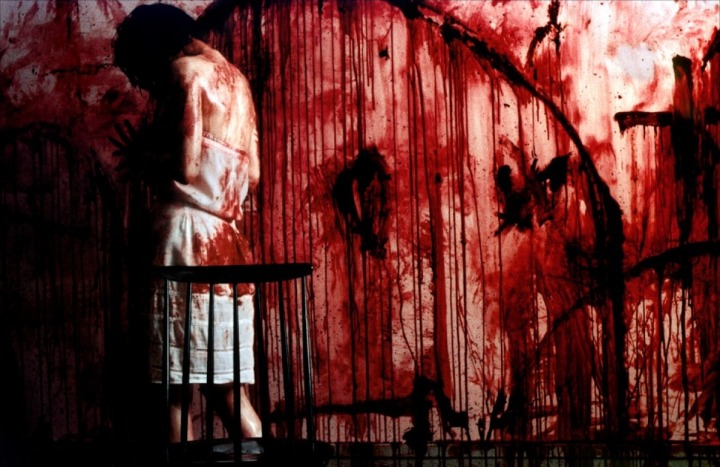 There’s a very sort of sensuality that Claire Denis makes you experience from watching her films, but the confrontation is never always the most comfortable. It is this very feeling that is embraced through her vampiric horror film Trouble Every Day and for many reasons more I also consider it to be the best horror film of the 21st century. It is a film that uncomfortably lingers upon the extent of human desire even to that point where the mere confrontation of such would already leave us feeling uneasy on the inside, but as close as we get to these moments they also reveal a whole lot more about human nature in and of itself. Yet there’s only so much that Claire Denis is aware that any of her viewers can manage to take into one watch, and thus it makes the horror even more repulsive as it comes by. As these layers start coming off one by one, so does the making of a great horror film by instinct. Like every one of the best films associated with New French Extremity, calling this refined would not be fitting but it also exemplifies everything that Claire Denis can be like when she is at her absolute best, thus what comes forth is what I believe to be the best horror film of the 21st century.

Everything starts all too fittingly, we see a woman named Coré (Béatrice Dalle) coming after a truck driver, and the next scene gives us a taste of what has happened between the two for we see his mutilated body and her face covered in blood. There’s another man coming by, comforting her as if he has any idea as to what already went on with her. Soon enough, we are also introduced to our American protagonist, Shane Brown (Vincent Gallo), flying into Paris together with his wife, June (Tricia Vessey). It appears as if the two of them are together for what may very well be their honeymoon. But the moment they arrive at their hotel room, violent impulses come by their way as Shane starts neglecting his wife and he takes an active interest in hunting down a former colleague, Dr. Léo Sémenau (regular Claire Denis collaborator Alex Descas). Léo is also married to Coré, a woman whom Shane was once obsessed with that now takes on a lustful desire for human flesh. The more we see Shane wandering around the streets of Paris, we’re wondering to ourselves if he knows what has happened to Coré, but there’s never any sense of clarity as to whether or not he is interested in coming closer to get ahead with her. It’s a thought like this that makes Trouble Every Day all the more intriguing to myself, but before Denis ties these two threads together they always move forward through desire.

Coré continuously feels driven through a sense of desire, but even to a more destructive extent because it’s clear from the start of the film that she has been infected with a virus of some sort. As Claire Denis allows the viewer to frame inside their head the mindset that drives Coré’s thirst for flesh, we also unveil a more violent side to that desire as it becomes outright monstrous. Claire Denis tricks her viewer into seeing an image that sounds like it could be rather pleasurable upon a first impression into being exactly that, but she also understands to what point can that desire from incredibly sensual imagery can turn into something too much. Yet there’s also a tale of sexual repression coming out from Coré’s own plight, which also makes Trouble Every Day rather tragic in such a sense. Because of this disease which she suffers, she has primarily lived her life within isolation and her husband has been doing everything that he can in order to cure her of this, but even he does not have the time for her anymore. She looks for those who can truly provide her with the sort of pleasure that she gets from her husband, only for that to turn into something violent upon a notion that amidst sexual interaction, one overpowers the other. It plays itself like Denis getting back upon what lust can do to the human mind, from the extreme focus on human skin as it turns into a bloody nightmare – revealing what comes forth when one feeds into their desires to a damaging extent.

This is also what brings me to talking about the role that Shane has in here. Despite the true intent that Shane has behind he and his wife’s trip to Paris, he still remains very protective of her. He remains very protective of her purity, and wants to preserve that. This is also where we get the picture that even though they have just recently married, we wonder whether or not their relationship is stable. When Denis puts great emphasis on the human body in this film, especially upon the nude body of a woman, she also drives out a certain mood from being so close to human skin. In talking about Shane’s role in this story, it’s also where she also frames his gaze in a more critical standpoint. We can already feel Shane’s lust as it grows more obsessive throughout the film, but it isn’t until the moment where two sides of the same coin finally come to light where we also realize something more horrifying has been lifted up right in front of our own eyes. Shane’s desire mirrors that of Coré’s almost too perfectly, but we don’t quite realize the violence of this desire up until they met up – all of this leading into a beautifully melancholy climactic sequence too.

If there’s really anything that makes Trouble Every Day so thoroughly stressful, it’s all present in the notion that Claire Denis is leaving you to imagine so much of the worst happening in our head, because she knows that there’s a running desire for more as the film goes on. In one of the film’s most noted sequences, we have an image of Coré having painted a wall with the blood of one of her victims as she walks down the stairs soaked. And oddly enough, this also exemplifies how lust manifests itself into something dangerous as everything turns tragic for June. As Shane starts spending more time on his own through his time in France, we still feel that he loves June, but also doesn’t – leaving her to become the bearer of any sense of innocence that the film has. She’s loved, but not lusted after, and the simple need for far more than what could already be provided can only bring out violent impulses upon those without suspicion. But come the final image, we’re left wondering what’s to come of June and Shane’s future, would it truly be protective or does she succumb to that desire for more?

With a title that’s every bit as fitting as Trouble Every Day, it only signifies that this is what comes forth upon a desire for more. But it’s also what makes this film every bit as horrifying as it is, because Claire Denis is never afraid to confront the idea of lusting for more in society as it finds itself developing into a violent impulse. She leaves us terrified already of the idea of what was to come, and at that point she makes the film’s more shocking moments stick inside your head from as much as an image. And that image comes back to manifest into something more terrifying. It leaves you all the more fearful for any trace of innocence that was ever set to come forward, though it also leaves us wondering if “innocence” had truly existed in the very story that Claire Denis has told us here. It’s that thought alone that also makes for an emotionally draining experience out of Trouble Every Day, but even knowing that this was Claire Denis’s first time tapping into the realms of horror, she also found a way to get under our skin even from the very sight of skin. For we can only imagine where that finds itself building from there onward. It’s a thought like this that only leaves me further convinced that this truly is the best horror film of the 21st century.

All images via Rézo Films.