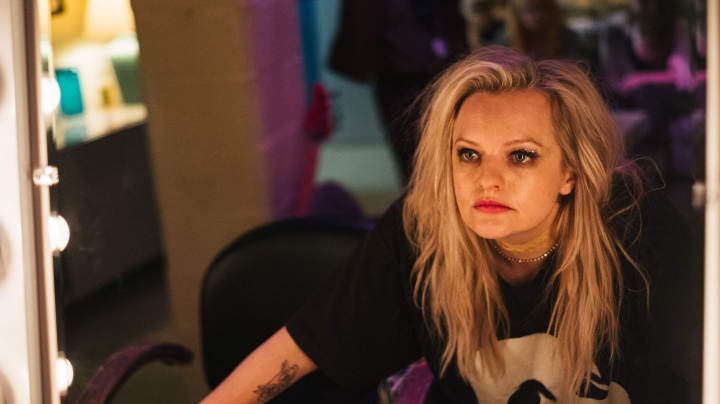 An extreme assault on one’s own senses, one that takes you in like a great punk rock song. In Alex Ross Perry’s Her Smell, you’re only left with this vague title describing something that can mean anything. It could even mean something pleasant because she’s wearing a whole lot of perfume in order to put on some fragrance for the show, but that’s also a part of what makes the whole film so wonderful in the same sense too. The third pairing of Alex Ross Perry and Elisabeth Moss isn’t only the most stressful film that they’ve made together, but it’s also the most chaotic of the sort. It’s chaotic in the sense that it shrouds you in everything that could lead to its own main character’s downfall, but Perry does not simply make his film only about the plight that one suffers in that sense. If there’s anything else that Alex Ross Perry has added to his own body of work with Her Smell, it’s a cementation for Perry’s name being among the most distinctive voices in American independent cinema. For all that said talent would be worth, this is where he finds himself having made his most significant work yet. 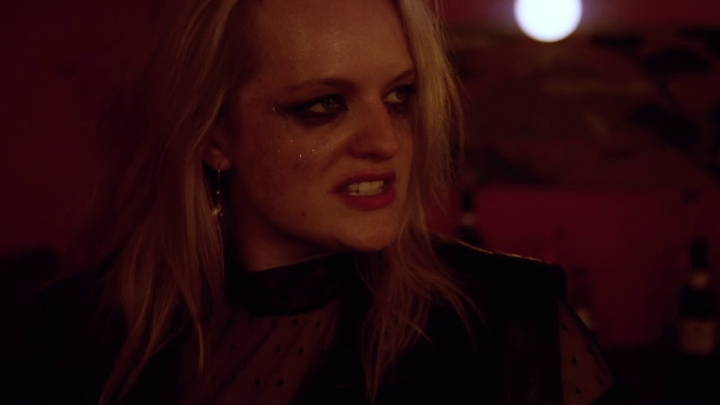 Elisabeth Moss stars as Becky Something, the lead singer for the punk rock band Something She. After having experienced great commercial success, she also descends into pure self-destruction at the expense of her many family members, friends, and fellow band members as she tries to recreate what had led her into such a massive success. From watching the erratic behaviour of Becky Something as she continuously pushes many of her own loved ones away even at the risk of her own career, parallels to the lives of Courtney Love or Amy Winehouse, but its portrait of the musician’s influence under such a negative light would already make for a difficult, if rewarding experience. The first moment where we see her, she’s performing a song to which many adoring fans but it’s also a cover for what lies beneath the energy one can put into giving people exactly what they love. But it’s also what feeds into the destructive ego of a great artist, removing all the glamour but you feel something fading away from there.

The entire first half of this film is sonically oppressive, for after a performance you still have many sounds ringing into your own ears as it builds up a more stressful environment on the inside. But it also brings yourself closer to the internal conflict that Becky Something continually finds herself facing as she descends into a dominating madness. Yet Alex Ross Perry also understands that this chaos would be hard enough to pinpoint, which allows the film to ring with a sense of honesty. But in how Alex Ross Perry chooses to frame that claustrophobia, what also comes forth is an honest portrait of the struggle that it can take for artists to be taken seriously and how their environments continually would hold them back from achieving greatness. By placing this backdrop atop a singer whose roots ring towards the riot grrrl subculture of punk rock music, there’s a greater sympathy that Perry forms here towards even the developing narcissism as it also places yourself into great discomfort just watching Becky throw away what could be something greater for her.

Becky Something embodies everything that one would remember out of many musical figures whose lives were notable for being explosive even to that point they’d cut short their own lives. The film’s structure perfectly pieces together different stages of her creative process, but also how she manages to cope with the damage that’s been done even by the ugliest aspects of her own narcissism. Yet only Elisabeth Moss could even make her seem incredibly empathetic from start to finish no matter how much we can dwell upon the ugliest aspects of her stardom. It’s clear that she’s a damaged figure as is but you can feel her pain as Alex Ross Perry surrounds the whole film in it, even when she’s not onscreen. You can feel its effect upon those whom she loves most, but Moss puts so much emotional honesty into this role it’s easy to believe that this is a role that she truly was meant to play. She brings that very fear to the screen of potentially turning expandable, just as well as she brings in that chaos from the self-destruction into every frame – even bringing back memories of John Cassavetes’s Opening Night.

As the film moves into its second half, it starts to lose some of its own momentum but it also takes pride in some of Alex Ross Perry’s own worst tendencies behind the camera which end up taking away from the power to a certain extent. It remains every bit as stressful as the first half, yet most of the second half is characterized by silence, just as you’re continually waiting for something to make a sound. But at this point, it also seems to have worn itself out as Becky’s redemption is characterized by smaller moments that she shares together with people whom she had pushed away for too long. In moments like these, I was more interested in looking at things from the perspective of her husband Danny, who is wonderfully played by Dan Stevens but most especially from Agyness Den’s Marielle Hell, who undergoes the most from trying to retain control of Becky. I wish that there was more depth to their own characters because of the importance they play into allowing Becky to rise back up to the top. But in that silence, you still have a wonderful cover of Bryan Adams’s “Heaven” by Moss – shot in a single take, and perhaps played in a more sentimental context, and yet it still stings all too perfectly.

Her Smell might probably be the best contemporary movie ever to be made about the punk rock attitude, because of how perfectly it captures the chaos of being caught within that oppressive fear. It’s a fear of potentially losing what allows your creative impulses to come into your head, but also a fear of what happens when you know you’ll potentially be seen as worthless, it damages your own future right before you know it. Yet even as the film plays itself up on the narcissism formed from being in the spotlight, there’s still something beautiful in the tragedy that arises from her own ambition. But that’s how one can characterize the shift in turn that Alex Ross Perry makes in order to bring Her Smell to the screen, it’s without doubt the most ambitious film that he has made by far – and it doesn’t always work, but where it lands, it builds up that stress inside your mind, and never lets go. In the words of Bryan Adams, “love is all that I need, and I found it there in your heart, it isn’t too hard to see, we’re in heaven.”

All images via Gunpowder & Sky.