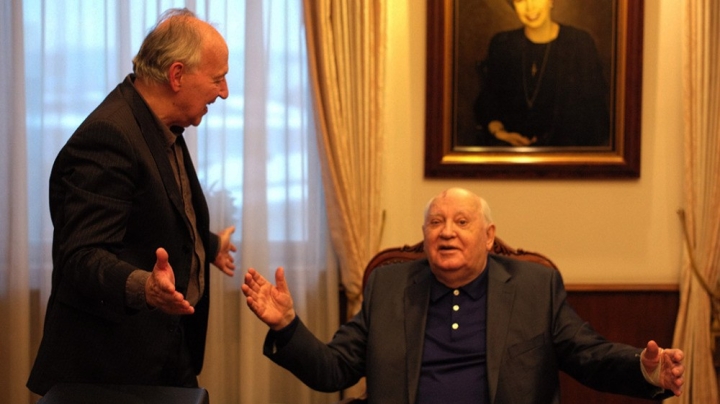 For director Werner Herzog, it’s easy to see how a story like this would be incredibly personal for him. But one can only set their expectations high enough when talking about a film director like Werner Herzog because he has always remained one of the most fascinating people of his own kind, both in general and when discussing his work as a filmmaker. It’s hard enough to point out what makes his style so distinctive but he has also maintained such a distinguishable personality over the years and seeing him take on the role of a documentarian would also prove a treat when you’re being subjected to listening to him speak. When talking with someone like Mikhail Gorbachev, Werner Herzog already seems like the perfect person to discuss how the career of one man whose influence went far beyond the Soviet Union, especially as its final leader. But if anything else makes Meeting Gorbachev feel all the more meaningful, all that one would really need is the sort of message that Herzog would want to share in the current political climate – because there’s a whole lot that we could learn from the way Gorbachev speaks about how his political career has impacted his personal life too. 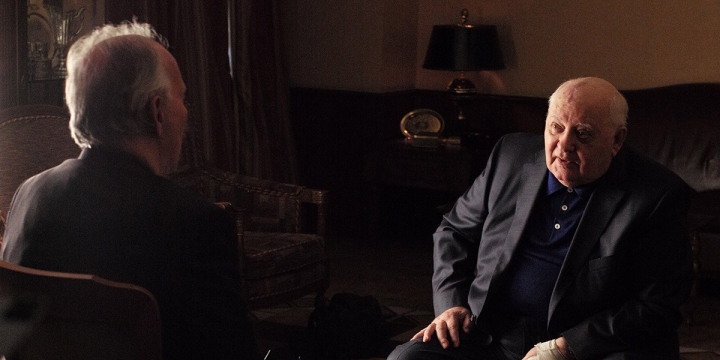 Over the course of six months, Werner Herzog and André Singer sat down with Mikhail Gorbachev – the final leader of the Soviet Union for a series of three interviews. In these three interviews, Werner Herzog and Mikhail Gorbachev discuss three different stages of the life of the controversial leader and the legacy he left behind too. But listening to Gorbachev talk about how far removed he feels from the current state of modern Russian leadership with the vastly different ideologies governing the land he has sought over for so long, Herzog also shows another side to the Soviet leader we have not seen before. Having earned far more respect outside of his own land, the conversations that Werner Herzog has with Mikhail Gorbachev invite us to look at a man with a position of power that simply wanted the best for his people – only to have found himself at odds with them as a result, for he is still blamed for the breakup of the Soviet Union. Naturally, a back-and-forth talk between Herzog and the former Soviet leader would invite oneself to look back upon how the political climate has changed over the years, but it’s never one that’s free of feeling personal.

When listening to Werner Herzog talk about the impact that Gorbachev’s ruling has left over the Soviet Union, and even for the rest of the world at a time of crisis, it’s easy to admire the way in which Herzog brings Gorbachev down to discuss how he saw the world around him continuously changing – maybe not exactly for the better at that. When listening to Mikhail Gorbachev continuously speaking, we already are given a clear picture of everything that he believed in, even at the scorn of other rulers that otherwise knew him whether they go from Margaret Thatcher to Ronald Reagan. Nevertheless, Herzog does not shy away from the public view of Mikhail Gorbachev in this instance but it’s made clear that he had admired Gorbachev greatly. Herzog lets this admiration of the Soviet leader transfer itself seamlessly towards his own audience, even creating a sympathetic portrait of his personal life. But listening to Herzog and Gorbachev exchange a good back and forth, whether it be a discussion of what more he could have done during his political career, his personal life, or any sort of banter, we see Gorbachev speaking like one of us and Herzog also invites us to see him under a new light. Only the perspective of someone like Gorbachev can speak about his own personal life beyond what we all knew him for, and we’re also seeing that portrait of him as Herzog looks back on his own time here.

Being sympathetic towards Mikhail Gorbachev would be one among many things that Herzog can make you feel about him with this documentary but while there’s nothing exactly wrong with how Herzog constructs the documentary, it all only ever seems to really unfold in such a straightforward manner. Of course, Herzog knows what he would want to say about Gorbachev in today’s political climate, but it also seems that Herzog’s own perspective feels missing from the picture too – even at odds with how much command does Gorbachev have over what the audience is seeing. While it still feels like a more personal effort for Herzog on the grounds that he sees a great deal of worth in the impact of his career on the world and where it has gone today, there’s a lot more that I found myself wanting to learn about what Herzog had taken out from his meeting with Gorbachev. There’s a lot of ground that seems to have been left out of the picture here and it leaves me wondering why Herzog had chosen to leave out what he did, because it’d be clear there’s still some sense of value in what Herzog would have learned about Gorbachev just from seating with him and talking to him. Quite oddly, the film seems to be empty of that and it also holds back the film from reaching much greater heights.

Yet nevertheless, there’s still a great deal that one can learn about how influential Mikhail Gorbachev’s legacy was from watching this film. But it also leaves one to think back and see where we’ve gone from the time that has passed ever since Gorbachev’s final days in office. In Herzog’s eyes, these were not as important – rather Gorbachev’s personal life is what gets most of the spotlight, as we continuously look back upon his many successes and his failings. But knowing how Herzog chooses to approach this story, there’s never a moment that feels as if it were overdone with sentimentality all throughout. We’re just seeing the extent to which Herzog’s meeting with Mikhail Gorbachev would also have changed his own outlook on the world as he knew it. If there’s really anything else that Meeting Gorbachev would invite you to, a discussion of Gorbachev’s impact on the rest of the world is one of those things but also a moment to think about how you also saw him prior to the start of the conversation, and you won’t see him that same way anymore.

All images via The Orchard.