Rocketman isn’t so much a biopic about Elton John as it is a film that indulges into the fantasies that have defined his creative process, while telling his story in a digestible manner. But at that, what director Dexter Fletcher presents to the screen in Rocketman is everything that is so unapologetically Elton John at that, without ever shying away from the roughest parts of his lifestyle – for he notably said that he never lived a PG-13 life as one of the world’s best-selling musicians. Yet it’s always the best parts of the film that remain every bit as glorious as they possibly could ever be, whether it be the sex, drugs, or just living at the height of one’s own life within the 1970’s, all creating what isn’t only the perfect portrait of Elton John as an artist but also as a person. It’s impressive enough that Dexter Fletcher manages to make a film that celebrates everything Elton John had made himself out to be from beginning to end, because there’s a point to which you’ll find yourself feeling like you aren’t watching a music biopic anymore. Putting it lightly, I think it’s gonna be a long, long time before we get another film of this sort – because even if it may not be perfect it still soars up higher than most modern biopics would. 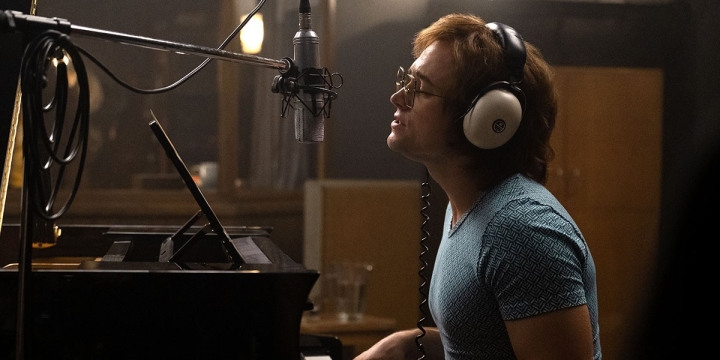 The film fittingly enough starts with Elton John (Taron Egerton) entering a rehab, but it isn’t long until he breaks into song as we delve into his childhood – from his relationships with his parents to the moment where he discovered his own talent for music. Yet these moments still give us a glimpse at the potential that’s set to come forward, from the moment when he meets his songwriting partner Bernie Tauplin (Jamie Bell) and his eventual first lover and manager John Reid (Richard Madden). With many of Elton John’s hit songs placed as a means of perfectly capturing what it felt like to be able to live within the moment, whether it be one of his higher points or his lower points, Rocketman does so much more than be a biopic capturing Elton John’s life, Dexter Fletcher captures perfectly what it feels to be able to live like Elton John at the prime of his life. But even at that, he doesn’t ever shy away from how much his lows would have stooped him inside of a downward spiral, indulging into Elton John’s drug-induced fantasies before he breaks into a song as well. If there’s anything else that can be said to better describe what it is that Dexter Fletcher brought us in Rocketman, it’s a movie that encompasses what glam rock what it was at its peak.

It doesn’t do particularly much in order to break free of music biopic tropes, whether it be the framing device of Elton John recalling his past achievements before he entered the rehabilitation center at the opening of the film or the downward creative spiral. But everywhere else Rocketman can, Dexter Fletcher stays perfectly honest about how Elton John’s own lifestyle would have impacted him from both the positive and the negative standpoints. But unlike most other films of the sort, Dexter Fletcher also presents Elton John’s lifestyle as being exactly what it was, from the debauchery to the excessive drug use – even allowing Elton John’s most recognizable hit songs to tell the story thus playing itself out more as a fantasy. Although not all of these ideas feel as if they have fully been utilized on the spot, there’s a sort of magic that has come by with how Fletcher allows you to absorb everything that made Elton John exactly the person he is, rather than just straightforwardly telling his story onto the screen for those who would already recognize these songs. It’s a film that draws you closer to his personality by giving you a taste of what it feels like to see things the way that Elton John did himself, without ever feeling a need to hold back (the much-discussed sex scene between Elton John and his manager John Reid being a perfect example of this).

As the Rocketman himself, Taron Egerton doesn’t simply play Elton John but also sings with his own voice in order to carry a much-needed sense of authenticity to truly believe that he is Elton John. Having already starred alongside John in Kingsman: The Golden Circle, it’s clear enough that Taron Egerton would already have a grasp at what made Elton John’s personality onstage and offstage so distinctive from many other glam rock stars of the era. Yet it’s also the chemistry that Egerton has together with Jamie Bell playing John’s songwriter Bernie Taupin that also makes the film feel so alive. To say the least, there’s a unique surrealist quality to the way in which the film presents the key moments in Elton John’s life, especially when the film starts breaking into song. But Fletcher still allows his cast to embrace every moment of it, only making these moments feel so much more natural too. These aren’t songs that only come in as a means of adding more noise to the background of the film but they’re telling of Elton John’s personal state of mind. You can already feel every moment is so clearly made out of love for Elton John, perhaps the most important selling point of the film too.

There’s a whole lot more that could have been done here in order to make a better film out of Rocketman, yet the results that we have here are perfect enough in creating the perfect tribute to Elton John. It doesn’t quite tread unfamiliar ground, yet there’s a distinct personality that Dexter Fletcher adds to Rocketman that doesn’t make it feel like any other music biopic – but most importantly it’s the way in which Fletcher embraces every bit of Elton John’s lifestyle, exploring his drug addiction and his sexuality and far more, that makes it feel so great too. Yet it also feels refreshing to see his homosexuality placed under a positive light too, because of how difficult the sort would be to find within a wide release. It feels refreshing because you’re seeing everything that made Elton John exactly the sort of person you would remember him to be, but it also feels great to be in that frame of mind too. With Elton John’s current plans to retire from touring, with his “Farewell Yellow Brick Road Tour” still ongoing, Rocketman isn’t only the love letter to Elton John’s life that a dedicated fan could want, but it’s also the perfect way to say goodbye to the yellow brick road, where the dogs of society howl, because his future lies far beyond the yellow brick road.