Víctor Erice’s El Sur is one of the most beautiful coming-of-age films ever made, but it was only half of what the director had initially planned out. Yet even though we never saw the complete film, it still feels like a fully accomplished effort the way it is, and makes a case for how beautifully painterly the Spanish filmmaker’s style is. From watching Erice’s films, whether it be this or The Spirit of the Beehive, it’s easy to feel as if you are transported to another era, watching everything happen just as if you were there to witness all of this for yourself. But from watching El Sur, there’s a beautifully resonant quality that stretches far beyond the look of the beautiful cinematography but also in just how it portrays the nature of growing up. There was a point to which I found myself watching what I thought could have been a life that could have been just like that of my own, one that was only built upon by the discouragement placed upon me by a lifestyle that is only ever set to provide nothing but disappointment after another. But there’s a sense of optimism that Erice promises you that only makes El Sur so much more endearing, you could only ever come out wanting to look back on what more you could do with the time you have left. 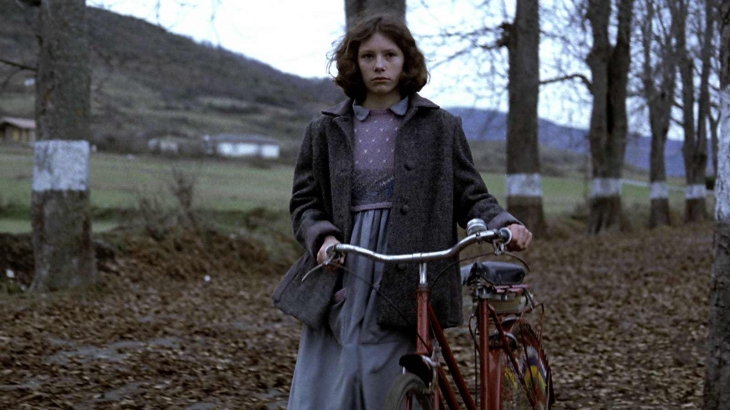 Based on the novella by Adelaida García Morales, El Sur tells the story of Estrella (Sonsoles Aranguren at age eight, Icíar Bollaín at age fifteen), a girl living in the North of Spain who lives together with her father, Augustín (Omero Antonutti). Augustín works as a doctor with a unique ability to find minerals through the movements of a pendulum, but he lives an unhappy life full of secrets that his daughter continuously digs up. Despite his unhappy life, Estella loves her father dearly and she envies his own abilities for she dreams of having them to herself. In her childhood, she sees her father as an entity of some sort, but closer to adolescence she starts to discover more secrets that would eventually change how she viewed her father, including that of a former lover (Aurore Clément) whom he still loves dearly. It’s difficult enough to imagine what a realization of this sort would do to how you see the people whom you love most, but Erice still allows the importance of such a reveal to make itself clear from how much we learn out of life there onward. It feels very shattering, but even as we grow up learning more about ourselves, there’s a sense of confrontation that Erice allows you to feel that pushes you to want to move on, or maybe even try to make things better no matter how impossible the notion might seem on the spot.

As children, our parents play an important role in our lives – when they are loving, we love them back, and we even see them as being godlike in some sense. But growing up, it can become harder to see where the lines are drawn and when talking about what you’ll see in those you love most. Every moment I still remembered seeing my parents fighting, I remember watching over them in complete disappointment and the pain was never a feeling that left me. Growing up, this was so common in my family and I wondered if my parents were still people that I could ever really look up to anymore. On the verge of adolescence, I knew that I needed to decide for myself the sort of life I wanted to live, but looking back at what it felt like to discover these moments more only has me wondering where this feeling of disillusionment all starting up. From watching El Sur certain things started to ring clear to me, for our parents still remain protective of certain things in their lives that they would never let their children know, because they could only shatter the image that they’ve made for themselves in our mind. But there’s still a sense of pain that Erice shows you in the distance that Estrella and her father continually have built with one another over time for it doesn’t simply start small, but it also stretches far and wide through different landscapes and phases of time.

El Sur is a film whose beauty shines in the small moments, yet Víctor Erice is never afraid to show how they make us feel on a larger scale. There’s a certain point in which we feel like we need to escape such an unbearable pain but it eats us all up in the worst possible ways, but Erice also paints a portrait of what we can idealize paradise to become no matter how impossible it may seem. Like his preceding feature, Erice’s portrait of childhood is one that still remains so truthful to the experience too. The way Erice captures the landscapes in here, going from the vast to the enclosed spaces of being inside a home, it all resembles the way in which our imagination at the height of our childhood can continuously take us away from the most mundane aspects of our normal lives. But even when Erice allows more fantastical elements to shine onto the screen in El Sur, they still ring with a melancholy effect, as if it were on the verge of disappearing. It only reflects a painful truth about what it feels like to grow up, when you find yourself moving further and further away from what you once thought to have made you happy. In looking for answers as to why this is how everything goes, they’re only made more difficult – can searching for any sense of paradise make all of these troubles go away, or will they only go and push us further away from those in our daily lives?

There’s an entire half of this film that’s clearly missing, but even without it being shown, I’m not entirely sure it’s something that I want to see just yet. It’s the speculation about what it is that the South represents in this tale of growing further apart from those you love that only fascinates me all the more. It’s just the fact that what’s not known of that place and time that feels so much more destructive. For some, it could be the place where all our lost dreams are found – perhaps best reflected in the film’s stunning cinematography as shot by José Luis Alcane. But it still remains as powerful as ever because we always like to think to ourselves that sometimes it’s best not to know something that remains present on our minds, which is what the seeking of the South would be like in this instance. Even as it remains told through the eyes of a child, what still keeps every moment as powerful as it is comes from the fact that this mindset has never totally left us even as we grow up. As we get older, we start finding ways to try and reform our lives in a way that we know they best suit us. Sometimes it can be as painful as looking back at these memories, other times we just feel the need to move on regardless of whether or not we know what’s up ahead.

I can only imagine what a film like this would be in its completed form, but that does not take anything away from the film’s power. Just the feeling that so much of this can go unanswered already feels destructive, because that’s how we know life feels like as it keeps moving onward. But from watching El Sur, something strikes you in a way that you wouldn’t expect, just from feeling like you’ve completely suppressed everything about it and you’re being reminded once again. It’ll be that feeling that changes you around people you know, because there might be something about those you remain so close with that might end up destroying that image you’ve created of them in your mind. But looking at this film already in an early stage of adulthood, I’m still trying to figure things out about my own life but I don’t know how to address them just yet. But like the ending to El Sur, I wonder sometimes if it’s something that I really want to know. El Sur may be incomplete, but that’s exactly what our search for answers that continually move us further and further away from people we love also are. It’s like a childhood memory that you think you’ve hidden deep enough, but one that also comes back to remind you of where the disappointments can take you.