Gus Van Sant’s My Own Private Idaho is often noted for playing a big part in bringing LGBTQ+ cinema to the mainstream as it was also seen as a landmark of New Queer Cinema, and for good reason at that – because I also happen to think that this is Gus Van Sant’s best film as a director. For many reasons I believe that this is his best film because of the way in which it speaks out for the whole experience as a gay man wandering through the Americana landscape – not only as that but even as a retelling of Shakespeare of all things, somehow this odd combination could only have ever been made possible by someone like Gus Van Sant. It’s a film that carries an almost dreamlike quality to it, but in order to best capture what the journey feels like, from continually wandering through America, there’s no other way for a film like My Own Private Idaho to unveil itself. Being only the filmmaker’s third feature, it has only ever remained one of the best films ever to be made about life in America, but also Van Sant at his most experimental and outwardly thus far. 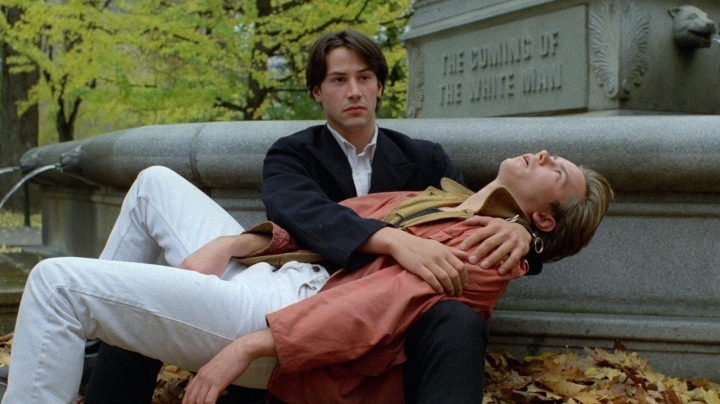 The late, but nonetheless wonderful River Phoenix plays Mikey Waters, a homeless gay hustler suffering from narcolepsy. In these bouts of deep sleep that he suffers, he dreams of his estranged mother, who appears in his mind through the replays of home movies. Keanu Reeves stars as Scott Favor, another hustler that is Mike’s best friend who is the child of a mayor who rebels against his family’s ways. As the two travel to Idaho, and even to Rome, the relationship between Mike and Scott turns into something far more as Mike confesses his love for Scott. Taking inspiration from the structure of Shakespeare’s Henry IV plays, My Own Private Idaho is not quite like any other Shakespearean drama you’ll stumble across but also one of the most moving tales ever made about self-discovery and the realization of where your newfound freedoms can take you. But coming to understand so much of this can feel every bit as messy as you start picking it up more in fragments, though it also adds to the beauty of the experimental nature of My Own Private Idaho.

From the fractured structure of the film alone, My Own Private Idaho captures what it’s like to be confused about living within the American landscape. But if there’s anything else that adds to the beauty of a film like My Own Private Idaho, all of it rings so clearly from the way in which Gus Van Sant immerses you into the lifestyle that Mike lives through the outwardly and experimental storytelling. This is a film all about how one embraces the American identity, especially in the importance that comes along the way from trying to define it for yourself. Clearly though, Gus Van Sant does not make a film like this as a means of embracing a sense of conformity but it’s also a different side of the beauty that takes you in, allows you to see the ugliest of America for what it can be and what it does to you on the inside, but Gus Van Sant brings you to understand a sense of confusion that comes forward from being a part of a world that you only find yourself continually getting disillusioned from. By creating such a disorienting portrait of a familiar landscape, Gus Van Sant also makes this tale feel so much more personal too in the best ways possible, for My Own Private Idaho can only be most fittingly described as a broken image of the paradise we’d all been led to believe in.

But that confusion also highlights what makes My Own Private Idaho one of the most moving stories of self-discovery ever to grace the screen. Throughout the film, Mike constantly ponders about what his life was meant for, with every fragment of his childhood that comes back to us in the form of a home video. But Mike’s journey is one that stretches far beyond his growing feelings for Scott all along the way, rather also made clear by Gus Van Sant’s portrait of the American class divide. Mike is continuously seeking a means of acquiring a better life for himself, and always dreams of such, but even in his growing feelings for Scott, there’s still something destructive that’s set to come along the way. The idea that there is a vision of paradise that Mike desires is what defines the greater scheme of the trip that Mike and Scott are embarking on, but so is the ringing possibility that it may not be true after all. Yet Gus Van Sant still clings onto whatever bit of hope that Mike has it can be the reality he believes it to be. And thus it still makes every moment of the journey every bit as rewarding as you could ever ask it to be.

If anything else best highlights what makes My Own Private Idaho work so beautifully, every beat of this film remains truthful to the vision of the disillusioned youth. Perhaps every moment of happiness may be fantasy, yet the realities still make the film so devastating too. There aren’t many other stars that better capture the image of contemporary youthfulness at the time in the same way that River Phoenix and Keanu Reeves did in here, but it’s also what makes every moment of their chemistry work so perfectly. But as a testament to the talent that River Phoenix had, and thinking about what he could have been, it’s also what makes watching My Own Private Idaho so heartbreaking too. In here, River Phoenix gives a performance unlike many other, as a man who wants to cling onto whatever hope he has left in himself that there’s a better life ahead of his already rough one. It feels so authentic, as if it were almost semi-autobiographical for him, thus making every moment where he’s onscreen feel so resonant.

My Own Private Idaho takes its viewers on a trip somewhere, but it’s never clear whether this is paradise or a descent into the worst place imaginable. Yet that’s what makes every moment of the film so beautiful too, because of how much it lovingly embraces all that is good in the broken world as one sees it, from the eyes of someone who has been disillusioned from the societal norms. It’s clearly very Shakespearean, for Gus Van Sant is never shy about his influence from the Henry IV and Henry V plays in here, but knowing how much Gus Van Sant had mixed together in order to make My Own Private Idaho exactly what it is, there’s still so much to admire about what all of it represents. From the documentary style photography, the Super 8mm dream sequences, or even the outwardly weird, My Own Private Idaho is far more than one of the most beautiful films ever made about American life, it’s borderline experimental to the point it can’t even be made the same way today. But for every bit we stumble along the way to get to the titular state of paradise, it also paints a perfect tragedy just from the knowledge that road never ends yet the more you go, the more you want to embrace the happiness that you’ve ever felt on all counts.

All images via Fine Line Features.