Nobody quite makes caper films like Rian Johnson does. Making his feature film debut in 2005 with Brick, Johnson has already established quite a name for himself in the genre through films like The Brothers Bloom and Looper, before he went on to direct Star Wars: The Last Jedi. Going back to working on a smaller scale with Knives Out, it feels like this is the sort of film that Rian Johnson has always wanted to make for a while – and it really shows. Mixing all of his greatest passions together with his knack for always throwing in surprise after surprise for his viewers, Knives Out only manages to provide far more when you least expect it, and it makes for a wholly entertaining experience. Like all the best thrillers from the classic Hollywood era, it’s clear as day that Rian Johnson is having so much fun with what he’s been given and he knows how to transfer that feeling over to his own audiences too. The knives do come out in this twisty comedy-thriller, but how deep in they go, you’d have to find out for yourself. 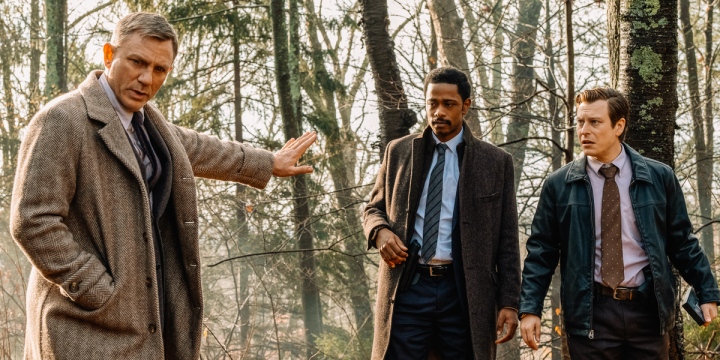 World famous crime novelist Harlan Thrombey (Christopher Plummer) is found dead the morning after his 85th birthday. The famed detective Benoit Blanc (Daniel Craig) arrives, suspecting foul play. Harlan’s South American caregiver Marta Cabrera (Ana de Armas) is called to the scene, after the whole Thrombey family is soon brought to the case as the primary suspects. With a stacked cast including Jamie Lee Curtis, Don Johnson, Chris Evans, LaKeith Stanfield, Katherine Langford, Michael Shannon, Jaeden Martell, and Toni Collette, what Rian Johnson creates is no ordinary Agatha Christie tribute for the modern age – he’s created a murder mystery that only twists the knives into your own expectations but also an uproariously funny film all about the hidden secrets that build up a family tree. It’d be easy enough to say that he turns one’s own expectations around on his viewers’ heads from the moment when it starts, but that’s only the start of what it is that makes Knives Out every bit as wonderful as it is.

Everything here starts off with a dysfunctional family having already been used to certain things working one way or the other. The Thrombey family has always been living off the fortune of their wealthy patriarch, but maybe things haven’t particularly been going in their favour. In Knives Out, Rian Johnson creates a perfect film all about balance, with every character embodying a different personality based on how they use their own share of the family fortune. Where everything starts with a rich family where every member believes in putting their cut to different purposes, it also ends with them unveiling something that they’d only thought would be secret. If anything else makes the ensemble which Rian Johnson has assembled Knives Out work so well, there’s more than enough personality injected into every character and with the actors being able to add their own touch to the seemingly stereotypical caricatures of every whodunnit – making every distinctive personality remain every bit as fresh as ever.

As others would have noted, Knives Out makes clear its influence from the writing of Agatha Christie, but probably the most clear connection can be found in Daniel Craig’s character of Detective Benoit Blanc. His mannerisms already evoke memories of Christie’s own Hercule Poirot, trying to solve the mystery even to the chagrin of his own suspects or fellow colleagues – and the way Craig performs such a character only makes the ride all the more entertaining topped with a Southern accent too. Much can already be said about how perfectly do stars like Daniel Craig, Jamie Lee Curtis (a deadpan realtor), or Chris Evans (the spoiled black sheep of the family) fit into their roles, but at the heart of Knives Out, the real scene stealer is Ana de Armas. In her own role as the Thrombey family’s Latin American housekeeper, Ana de Armas plays the part with such sensitivity, you can’t help but find yourself drawn to her own struggle to survive in spite of herself being a suspect in Harlan’s death. She has no trouble with carrying the crux of the film on her own shoulders, even adding a more sensitive side to the twisty thrills and dark sense of humour of Rian Johnson’s own writing.

If anything else does make Knives Out any wonderful, Rian Johnson still lets traces of political commentary weave their way so naturally too. Yet given as Rian Johnson is already working off a whodunnit formula that has already been set afoot by mystery fiction of the past, he still injects bits of thoughtfulness that perfectly allude to the current climate – both through the on-the-nose humour or the overall scope of the story that he’s telling to his viewers in the film. It’s a risky move for someone like Rian Johnson to step into, perhaps even revealing of his own Internet habits at the same time, yet the fact he still goes for it also works in the film’s favour. Yet given the nature of where the film’s own twists and turns lead up to, seeing where it all leads up to makes the conclusion all the more satisfying. It’s always fun listening to these small bits find their ways into a film that could already be best described as Clue for the modern age, yet Rian Johnson only finds a way to make these modern touches work so perfectly for even in this situation they feel natural – and add up to something more rewarding too.

Knives Out could easily find its way among genre favourites like Clue and Murder on the Orient Express as a modern take on the whodunnit genre of mystery films, but like the best of these sorts, it knows how to keep one guessing what’s to come. In the case with Knives Out, you’re also made to feel like you’re trapped with the Thrombey family yet you slowly see the monstrous sides to each and every member the more you stick with them. There are many things you can call Knives Out in that case, whether it be the pitch perfect black comedy about a dysfunctional family, a murder mystery that always keeps you guessing what’s coming up next, and a tale of survival in a current culture, but most importantly, it’s a great film all around. You can already feel from start to finish that this is the sort of film that Rian Johnson has always been itching to make, and that’s what helps makes Knives Out the best sort of mystery. It’s not just a film that keeps you on the edge of your seat as it is a film that juggles elements of comedy into uncomfortable spots, it’s a great film that just shows you how it’s all done.