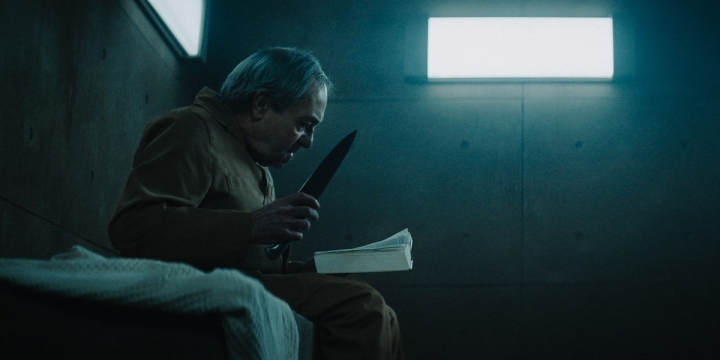 Perhaps the best word of advice prior to watching The Platform would be to watch it without having eaten a huge meal before viewing it, because this isn’t so much a delicious film to leave sitting in your mind after the images that it shows you. This isn’t a film for those with a weak stomach but in how Galder Gaztelu-Urrutia would show you even the most disgusting aspects of humanity on the spot, The Platform already feels like a daring experiment too. In fact I have not quite seen a satire much like this, one that feels so unafraid to delve into the worst of humanity but also one that blends that perfectly with entertainment value in order to create a bizarrely disgusting delicacy.

The film takes place in a weird prison system: two people are to stay with one another on a single level, with an item of their choice. As the film starts, we see that they are on level 48. There’s a hole in the center of their prison cell, but eventually a platform drops down presenting food to the inmates. But because the inmates are so far down, the food has already been eaten by the above inhabitants. It only becomes a matter of time before those within the cell end up being moved either up or down, which soon makes cellmates who may have seemed friendly at first into enemies, with every prisoner refusing to starve themselves to death. What poises itself as a film about what happens when options for survival are so scarce turns into a thoughtful portrait of the human instinct, as they soon unleash their inner animals.

At its absolute worst, the film can get very disgusting: the sight of food will already make yourself feel nauseous once you get ahold of the way the premise works. Yet there’s a part of me that also feels as if the film rides too much upon grossing out the viewers by the thought of what had been happened with the food that had already been consumed, or what above inhabitants are able to do to torment the prisoners below themselves. At times, it gets entertaining when you’re on the same level as someone who’s clearly done some damage to the food for those down below. Yet the more it goes on, as everything turns to the more disgusting, it also starts to lose its own steam as it turns incredibly repetitive, to a rather frustrating degree too.

While the film doesn’t quite make the most that it could with the creative concept it’s without any hesitation an entertaining enough ride for a little over an hour and a half. It isn’t nearly as insightful a satire as it thinks, nor is it shocking enough to really provoke – as a matter of fact the more it strives for the disgusting the more its own schtick wears thin. Galder Gaztelu-Urrutia sets himself up as a name to look out for following The Platform, but one can only take so much of watching food that’s been tampered with to the point it unleashes what’s supposedly the “inner animals” of humanity before they’ll feel disgusted in some way or another. Your best bet wouldn’t be to eat a whole lot before stepping into The Platform, for it definitely is not a film for those with a weak stomach.

All images via Basque Films.