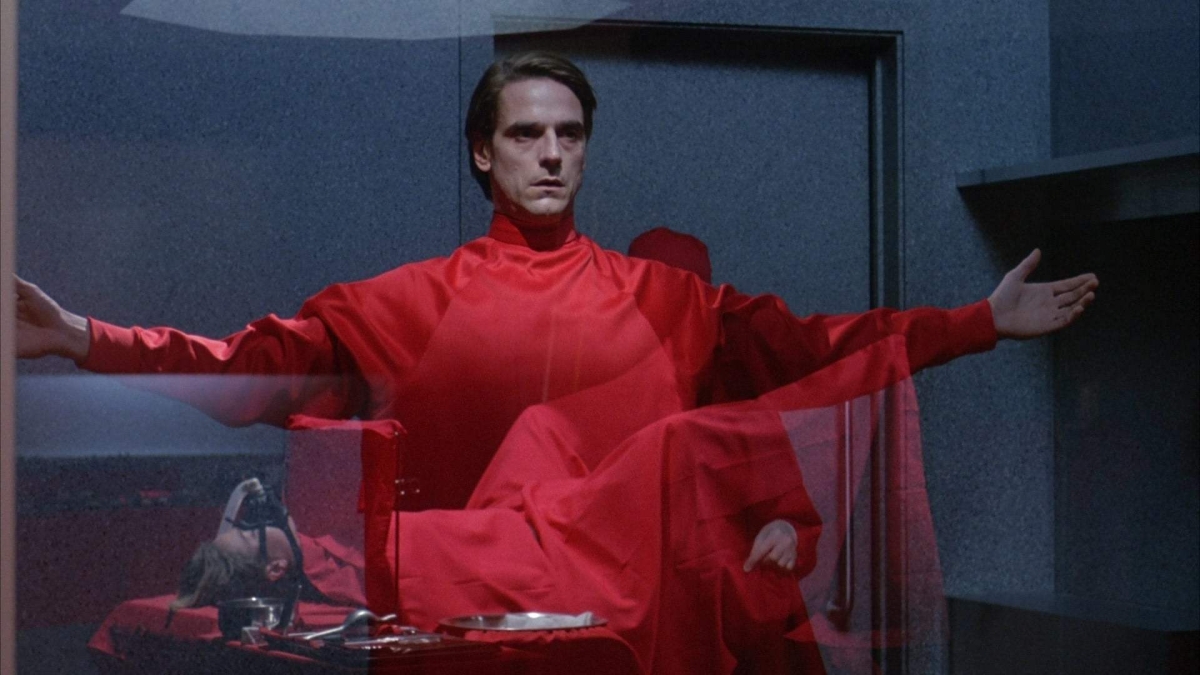 Although many elements that have defined David Cronenberg’s earlier work are absent in Dead Ringers, it still nonetheless the film that I consider to be him at his best. While it may be more toned down in terms of the gore when you put it next to The Fly or Videodrome, Dead Ringers does not ever lose sight of the horror of bodily alterations and mutations that have created the images we love and recognize from his work: but what also comes forth is the film that I believe to be the king of venereal horror at his most psychologically complex. But even at his more restrained that same horror can still be felt on the inside, creating a beautifully tragic and terrifying tale.

Based on an allegedly true story, Dead Ringers tells the story of Beverly and Elliot Mantle, identical twin gynaecologists who are both played by Jeremy Irons. The twins, both of whom are dedicated to their practices share a peculiar symbiosis, one that can be felt most through how they both interact with women: Elliot is the more confident of the two and often has affairs with his patient, but Beverly is far more meek, whom Elliot passes the women over to upon tiring of his own affairs. This perverted balance is soon disrupted by the presence of the actress Claire Niveau (Geneviève Bujold), with whom Beverly falls in love, an affair which soon brings drastic consequences for the twins and their practice.

Dead Ringers still carries Cronenberg’s fascination with bodily alterations but it also heightens a great focus on the discomforting nature of the concept of the human body. Everything also starts off on the most fitting note, with the twins being introduced in their childhood where they ask another girl to have sex with them for “an experiment.” This uncomfortable encounter proves itself pivotal towards the way in which their relationship is best defined; their perceptions of the female anatomy drive only a stoic reaction from themselves but disgust from the outside world. It has come to the point where the public perceives the twin as the same person, which forms the basis of where their psychological symbiosis, creating an almost impenetrable balance where an alteration could be akin to deformation.

Despite being one of Cronenberg’s more restrained efforts given the films that he had made prior, Dead Ringers still succeeds in exemplifying his technical mastery to create the illusion of both twins being in the room at the same time. But these moments also become home for Jeremy Irons’s performance as both of the Mantle twins to establish them not as their own person but as a singular entity. It’s a career high for Irons that feels almost impossible to pull off so successfully yet David Cronenberg achieves it through this illusion; at times even leaving us wondering whether we are watching Beverly or Elliot onscreen within the moment. These tricks are crucial to forming that symbiosis we recognize between the twins but as Cronenberg builds the twins as an entity we start to feel as if we are one within that same space as he plays more mind tricks on his audience as felt through Geneviève Bujold’s Claire Niveau.

With the twins and their power dynamics over one another also taking command of the screen it also opens room for a greater tragedy coming aboard. In a pivotal scene where Niveau calls both of the twins to come for dinner after Beverly breaks the brothers’ dating mantra, the insidious nature of their practice only becomes clearer as Niveau takes command over the two of them—shifting away the Mantle brothers’ desire for power into them exerting their vulnerability. Her celebrity status places her above both the twins, but Beverly nonetheless remains smitten, which leads to the twins’ slow, agonizing downfall. Every moment that leads up to here carries a particularly haunting sense of beauty, but you feel the twins’ hard work soon being sent down to a new low where recovery seems near impossible, something that only Cronenberg could establish with such tenderness.

It feels very confrontational when putting this next to the sorts of films that Cronenberg has established his career from, but there’s never a moment in Dead Ringers that doesn’t leave me purely feeling awe at what he’s left us to imagine would come forth from the entity that the Mantle twins have made from themselves. Like The Fly, Cronenberg exerts a more sympathetic side in order to create a more restrained form of body horror but the perplexing and coldly cynical nature that the twins have made for themselves creates a beautiful tragedy where power slowly crumbles down, but as their symbiosis slowly breaks apart it also turns into a tragedy about people who don’t understand their place in the world around them let alone their worth as individual people and not as functions within a system they made for themselves. Haunting, taut, and beautifully poetic, Dead Ringers is arguably David Cronenberg’s very best film.

All images via Telefilm Canada.