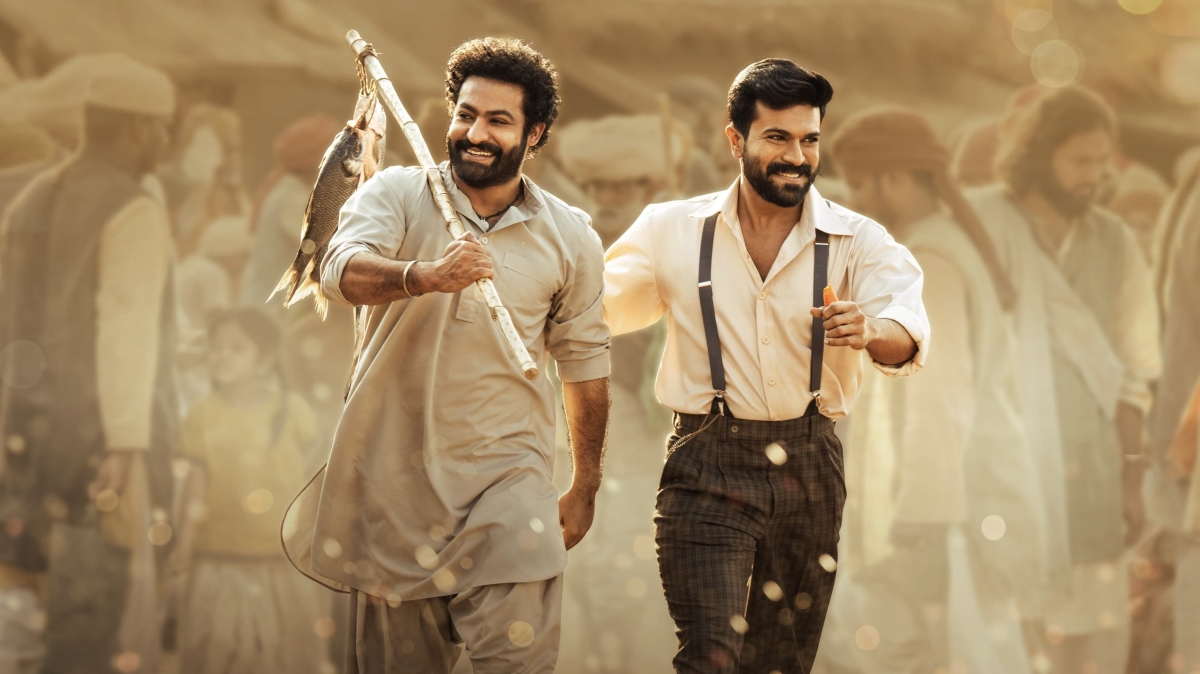 Rise, Roar, Revolt: these are the three R’s that make up the acronymous title of S. S. Rajamouli’s RRR, a Telugu blockbuster now catching the eyes of viewers in the west. As the film made waves around said viewers, it’s hard to go ignore how people have been talking about the film compared to western blockbusters: but that also shuts out talking of this Tollywood (not Bollywood!) film on its own terms, where it’s just a great time all around. I certainly am not the first to admit my experience with Indian cinema happens to be very limited, but nonetheless I can’t help but be taken aback by the scale of RRR.

Set in 1920 – during the British government’s ruling of India, RRR is a film telling the fictional story of a friendship between real-life revolutionaries Alluri Sitarama Raju (Ram Charan) and Komaram Bheem (N. T. Rama Rao Jr.). As the two of them bond, their own journeys take them on a path setting them to fight back for their own country, at the hands of the tyrannical British governor Scott Buxton (Ray Stevenson) – with Bheem also falling in love with Scott’s niece Jenny (Olivia Morris) in turn. To say that these aren’t the end of all the thrills found in RRR is to undersell it, for this Indian blockbuster never lets up the more it goes on, and it’s even more glorious for it.

This action extravaganza never lets up on the maximalist thrills you’ll find from beginning to end, with every set piece seeming more ludicrous and bombastic than the last: but watching all of it unfold is a completely different story entirely. It’s all just so fantastically choreographed (which can be said of the film’s musical numbers, but with “Naatu Naatu” being an obvious highlight) and highly energetic, but most importantly, it just looks like a real feast for the eyes. Whether you’re watching a seemingly smaller scene featuring Bheem try to woo Jenny or him taking on a tiger with his bare hands.

S. S. Rajamouli’s RRR is one that screams “epic” from start to finish, never wasting a single second of its three-hour running time, and only growing bigger with each passing second. Even with all these set pieces being so extravagant and making the most out of the film’s budget, they never seem to come at the expense of its own themes, being all about the fight to take back from colonizers. On this ground it’s easy to see how this film has resonated to the extent it has with western audiences, but to see all of it shining through within a story about a friendship in its historical fantasy.

While many have noted that there aren’t many American blockbusters today that carry a similar energy, to what’s displayed here, my first thought instead went to the films of John Woo – namely The Killer. It all comes through from the chemistry between Bheem and Raju, despite seeming to fight for opposing sides, before realizing how much they have in common with one another in turn. Both Jr. NTR and Ram Charan are also just so thrilling to watch in their moments together because of this, and moments that aren’t as widely talked about remain so entertaining just on the count of what the two of them can do with one another, like all the best “heroic bloodshed” movies you can think of.

Even then, there’s an entire political context surrounding this film which is expected when talking a film about freedom fighters. I can’t really comment on this as an outsider from Canada – although many brilliant Indian writers who have talked about the film certainly would have a more valid stance on this than I. Although I believe one shouldn’t ignore these, I also just can’t deny that simply watching RRR just felt like the best sort of sensory overload. It’s a violent ride from beginning to end, like you’d ever want from any action movie. But even then, it’s also a thrilling tale of friendship, as you’d want from any movie. And like any great musical, those songs stick in your head. As I’ve said already, it’s just maximalist joy all around, made by a filmmaker who wants to make the most out of everything.

All images via DVV Entertainment.