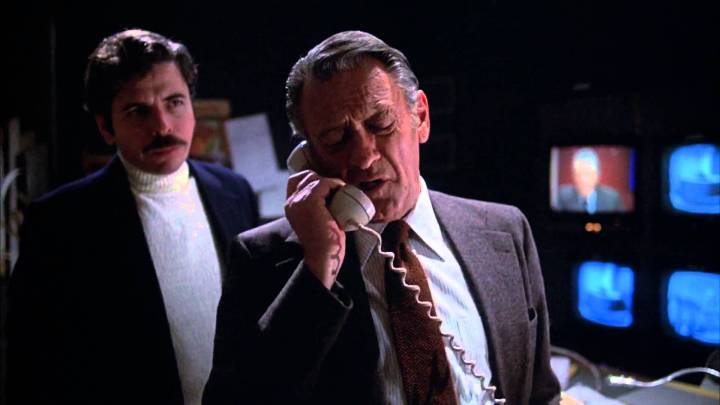 Sidney Lumet’s Network is mad as hell and it won’t take it anymore. The mainstream media is set to do anything in order to boost their ratings, and that’s where Network still runs perfectly true even today. We already recognized the anger within Network‘s satire back when it came out and to this day, it remains one of the most vicious satires ever made, because today, the content which it shows is indeed still as shocking as it was back in 1976. The best way one can imagine a film like Network is to think of it as Sidney Lumet’s equivalent to Stanley Kubrick’s Dr. Strangelove, and instead of the Cold War, place it within the context of television news networks, suddenly you’ll get the brooding cynicism that was presented here.

Network is a darkly funny film which speaks of truth, and how the media will do anything they can in order to boost their ratings for the sake of achieving a greater salary than what they already have. We’re observing the television network UBS. They have just fired their longtime anchor, Howard Beale, because of the poor ratings that they have only recently been receiving. The following night, Howard Beale announced that he is planning to kill himself on the air. The next moment on the air, he boosts their ratings the moment he bursts out into a fit of rage, which the people running the station decide to exploit for their own good, uncaring of Beale’s own mental state. With Howard Beale going mad, the network decides to exploit his ravings for their own good – and therein lies the power of Network‘s cynicism.

Network exposes a low to be found within the mainstream media, in order to boost their ratings, they will be desperate enough to do anything. They are not aware in the slightest of Howard Beale’s own mental health nor his state, but they do not care anyway, for all they want are the high ratings and the money. It’s an interesting way at looking at how the media is set to do anything to keep their stakes high, whether it be from manipulating the truth or going past what normally would be too much for the censorship boards. Here, what we have is a man whose own fits of rage become the subject of fascination for all of America, but did these networks ever think about what would happen if these people got tired of seeing the same rants over and over again?

It is especially clear within the words that Paddy Chayefsky has written into his brilliant screenplay that Network is oozing greatness. Paddy Chayefsky’s script isn’t merely anything from the ordinary, but seeing how it satirizes the desires of media from its time in such a manner that it even predicts the desperation of some news networks right now (hint, hint), it’s a screenplay that foresaw many things coming within the future, because the relevance in which it still bears is something to be kept in mind when looking at such an incredible film like this. When we look at it in terms of the way the dialogue is worded from just how it flows from start to finish, it truly is one of the finest scripts put to film, and when Sidney Lumet came in to direct it, something truly spectacular that exposes all the brilliance of such a script comes out.

The obvious highlight when looking at the performances is that of Peter Finch, who played the deranged Howard Beale in a role that posthumously won him the Academy Award for Best Actor. When looking at a performance like this, you can truly feel the anger in which he is letting out especially within the delivery of his famous monologue “I’m as mad as hell and I’m not going to take this anymore!” Faye Dunaway’s performance shines brilliance, for she is a perfect embodiment of the cynicism running within a desperate new network trying to recoup what they’ve lost. All in all, the cast spews out brilliance from start to finish, adding more to just how wonderfully the brilliance of such a perfectly written script is allowed to shine at the very best.

Watching Network today and attempting to summarize what it managed to predict within this day and age would be a most difficult challenge, for there’s a preparedness which it seemed to expose within its day that most other films these days wouldn’t be able to catch up with. It’s about as cynical a satire today as it was back when it first came out, maybe even more so at that. And I’m aware how many would consider 12 Angry Men to be Sidney Lumet at his finest, but the bigger ideas which are exposed under all the brilliant writing and performances in Network have this one take the cake in my eyes. After all these years, it has remained mad as hell and it won’t take it anymore.