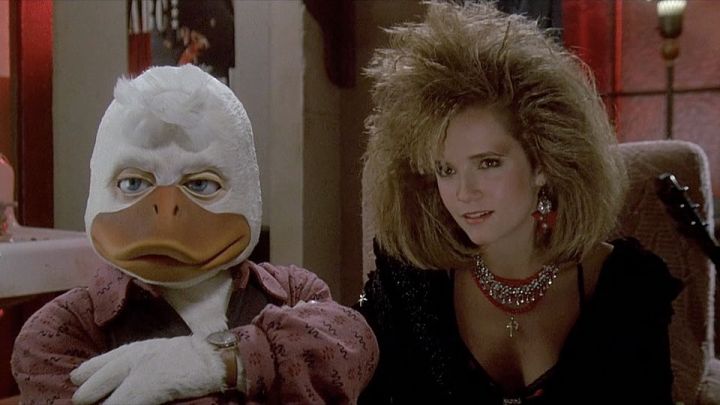 Howard the Duck – a crowning achievement for George Lucas’s career. Make no mistake, this notorious flop certainly is an absolutely awful film in so many ways, but there’s a lot about what it leaves behind that turns it into a thing of glory. All the wrong reasons alone add up to why Howard the Duck is a delightful product. This is the sort of failure that’s absolutely fascinating to watch because of how much it is doing wrong because the appearance to which it provides is something so bizarre it keeps one’s attention as it moves along. One such level of enjoyable badness is quite the achievement especially when all the glory of such a failure is coming into play. And that is where Howard the Duck is truly something unlike any other. Like I’ve stated, it is rather undeniably a bad film, but wow, is it truly something to be embraced.

It’d be easy to see that the film is doing so much wrong from the way that it is set up. The titular Howard the Duck is walking back to his apartment inside of a planet where everyone is a duck and duck puns fill up just about everything (“Rolling Egg magazine,” “Breeders of the Lost Ark,” etc.). He’s suddenly brought out from his apartment when things start shaking, for no reason whatsoever. The moment in which Howard blasts through the walls of his apartment are where so much wrong comes in, for we even get a glimpse at a female duck supposedly nude from the top inside of a bathtub, exposing her bare breasts. Supposedly one can already assume just from a title like Howard the Duck that it would be for kids – but with that single image presented not even ten minutes into the film, bad signs are already set.

The costume of Howard the Duck is yet another thing of wonder. He never emotes properly because one can easily see how poorly it functions when we hear his voice – as it never even syncs together with his lip movements. It’s creepy, but there’s another level coming by that makes Howard such a fascinating part about such a terrible movie. He’s never looked at in a weird way all because he’s a duck. He’s a pervert that could even be comparable to Frank Reynolds in It’s Always Sunny in Philadelphia. A good image for kids is clearly set in motion with a character like this, but to talk simply of just how bizarre such all these events surrounding a character like Howard are, it’s so difficult because there’s nothing else out there much like this.

A highlight of this film comes out from the performances from the main live-action cast, whether it be Lea Thompson, Jeffrey Jones, and arguably the most fascinating case for the bunch, Academy Award winner Tim Robbins. All of their performances leave out such an awkward aura surrounding them, but just like the case of Howard, it’s always intriguing just to consider how everyone around these characters acts so nonchalantly as if apparently nothing extraordinary is taking place. You’ll have Lea Thompson in lingerie getting in bed together with Howard, but Tim Robbins’s case is something out of the ordinary. He’s supposedly a lab assistant, but just about every scene that has him taking up the screen has him acting much like a maniac. Truly a performance to define the career of a wonderful actor.

One would wonder how a film with such stupid writing and clearly incompetent direction manages to move along like it’s no big deal. And then in that sense, something that’s admirable is coming about because it embraces the 80’s schlock in such a glorious manner that if it wants to be taken seriously, it’s evidently failed at its job. When one considers the fact that prior to directing this, Willard Huyck and Gloria Katz have also been involved with American Graffiti and Indiana Jones and the Temple of Doom (this one I personally find to be overrated), it’s fascinating to see how willing they are to dedicate themselves to something that would so evidently fail because of how many of the wrong decisions are being made with where even to go with such a concept. It’s baffling, but in a strange sense that grasps your attention.

Yes, it would be easy to say that Howard the Duck is terrible. It is a film that does absolutely everything wrong, but not in the sense that it angers. Instead, it fails so much to the point it’s absolutely fascinating to watch. This is a film that works around all of its poor qualities much to a glorious degree because it’s always going to keep the attention focused whenever we look back at just how bizarre everything absolutely is. It’s certainly quite an achievement at being something unlike any other when we look at whatever else George Lucas has left behind within his impeccable career, as it is something that is so enjoyable for just all of the wrong reasons. Gather a bunch of friends for this one, and the experience will be more enhanced.