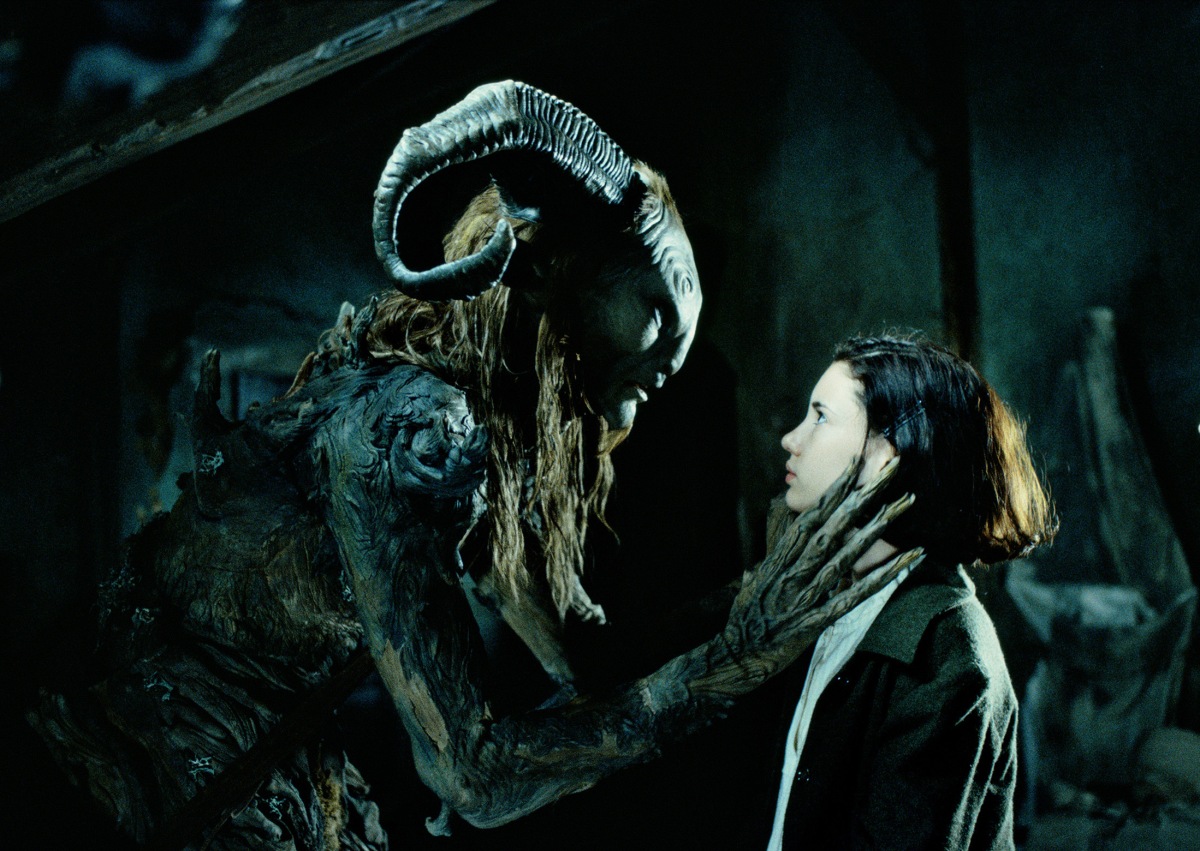 Many creative minds have left their touch upon the fantasy genre, but never in the way that Guillermo del Toro has offered his very own in Pan’s Labyrinth. Revolving around the concept of imagination and what it does to us as we grow older, what we are left with is not only one of the greatest fantasy films to have come out in the 21st century, but also one of the most creative projects of its own kind. It’s already one to admire the imagination of a man like Guillermo del Toro, but when watching Pan’s Labyrinth, you’re seeing everything put at its very fullest. He tells a tale that clearly is so personal to him, and the evidence is clear when you pick up on its influences, no matter what they range from: fairy tales, Victor Erice’s The Spirit of the Beehive, the hardships encountered in childhood; all forming something so magnificent in Pan’s Labyrinth.

Ivana Baquero as the curious Ofelia in Pan’s Labyrinth.

Set after the Spanish Civil War, Pan’s Labyrinth tells a story that blends together reality and fantasy through the eyes of Ofelia, a curious 10-year-old girl who faces the horrors of the reality which she is living in through interacting with a faun whom she discovered inside of a decaying labyrinth near her stepfather’s home. The faun sees Ofelia as the reborn spirit of a princess who had died inside of a fairy tale, whose father had awaited her return. With the film’s setting inside of a Francoist era Spain, it adds more to the wonder that is created by the storytelling that Guillermo del Toro has provided in Pan’s Labyrinth, in a manner that the fantasy works as a way to balance out the sanity of a human being especially upon facing the harsh reality as Ofelia begins to find comfort inside of the world that the faun had introduced her to.

The building blocks for Pan’s Labyrinth carry many different references to what is so recognizable inside of fairy tales, but in such a mystifying sense that pulls one in. For one, we have the evil stepparent in Captain Vidal, the lost princess, and the means of escaping from reality. It is clear from here that we have one method of looking at how Guillermo del Toro’s film is operating, it is operating like a fairy tale, which is only a small fraction of where the beauty has come out. Yet unlike most fairy tales, Pan’s Labyrinth is not a story that is meant for very young children, but the structural resemblance adds more to the effect to which such a film leaves behind.

Coming down to the role of Ofelia, it is mystifying just to witness how Guillermo del Toro is capturing the terrifying world of Francoist Spain from the eyes of a young child – but at the same time it also adds more to the wonder Pan’s Labyrinth creates. Ofelia, a girl at the brink of puberty, resorts to these fairy tales as a means of keeping herself in comfort, but it is also these fairy tales that help her in growing up from the moment she first wanders into the labyrinth. This labyrinth is not just merely a piece only for comfort, but also a place for discovery. It is a place for discovery in the sense that not only is it a new world that she found, but it is also fueling a challenge in order to find out whom she really is. One can draw back to Hayao Miyazaki’s Spirited Away in the sense that both films establish a young protagonist discovering the challenges of coming of age through the use of a world beyond the real, but in Guillermo del Toro’s case, something else altogether has been presented. In her debut performance, Ivana Baquero carries one factor that is crucial to the film’s success inside of herself, carrying a convincing array of emotion that draws back to Ana Torrent inside of The Spirit of the Beehive.

One of the most crucial elements to Pan’s Labyrinth is the power of choice. The young Ofelia had been warned by Mercedes to “be wary of fauns” but the image that the faun presents for her is another factor that helps what Guillermo del Toro had been forming with the film’s unconventional coming-of-age narrative. Since I do not wish to spoil the details of the film, it is such a critical aspect to Ofelia’s coming of age, as the faun presents her with a series of tasks which he promises will grant her a return to her father. The image of the faun at first is frightening, but Ofelia obeys when the faun notes how he does not mean harm upon her. The faun carries good and evil inside of it, but he is not offering either to Ofelia, and instead it is the choice between them. Said theme is crucial in defining Ofelia’s quest because, ultimately, she is given the choice to decide whether or not she should discover what she will need to face inside of her life, without any aid from peers.

From the set pieces that capture such an era, it is where Guillermo del Toro also works around another way of looking intoPan’s Labyrinth: as a horror film. In its detailing of the time period, Guillermo del Toro never holds back in order to establish the harshness of the real. The Captain, who is devilishly portrayed by Sergi Lopez, is a menacing, sadistic figure who looms all throughout the film, in which he is a man who only wants things to go by his way, no matter how impossible it is. As subplots come in, whether they revolve around Captain Vidal or the housemaid Mercedes, the tapestry which is established is nothing short of beautiful. Captain Vidal claims he is a man of choice, but his actions show otherwise – and those against him are people who define the power of choice, with where it takes them inside of a tragic reality.

Visually, Pan’s Labyrinth still remains among the most gorgeous cinematic creations to have come out in the 21st century. It is not only from the set pieces which Guillermo del Toro puts together for both the fantasy and the real, nor is it the astounding special effects when it comes to creating the many creatures of the fantasy world, but it is all Guillermo del Toro’s imagination that ultimately fuels Pan’s Labyrinth, given as it is also a vital aspect to what keeps a film so tightly put together. All of the small details to the worlds which Guillermo del Toro creates are necessary in letting his imagination flow, but then we also have creatures like the faun and the Pale Man (both of whom are magnificently portrayed by Doug Jones) that also express more creativity at hand. Together with the eye of Guillermo del Toro going behind the camera, everything fits so perfectly into place as he continues to let these visuals define the piece.

Pan’s Labyrinth is a film that works in so many ways: whether it be as a fairy tale, a coming-of-age story, or a horror film. There are few films that I have ever seen that carry the sort of imagination which Guillermo del Toro laces Pan’s Labyrinth with, but at its core, something so resonant comes about. It is a film about the power of choice, and how it helps us in finding our identity inside of the harsh reality which we live in. And in that sense, Guillermo del Toro has let himself out to the very fullest inside of Pan’s Labyrinth for he finds a manner of bringing together the imagination of a child with the brutal horrors of the adult world, but he also creates a means of encountering what sort of conflict it would present in one’s life.

All images via Wild Bunch.