A voice crying for help inside of a city falling upon the ruins of itself. Martin Scorsese’s Taxi Driver gives that voice a perspective and just plays out as a perfect lash against the society occupying one’s mind. Quite arguably Martin Scorsese’s finest achievement as a filmmaker, Taxi Driver defines a generation so perfectly and in the years to come, it has still continued to shake viewers of all sorts – especially when there’s a specific illusion the world around oneself is creating that only greatness comes about. But maybe there was something more than Martin Scorsese and Paul Schrader had attempted to reach, which allowed Taxi Driver to remain as strong, perhaps even grow stronger within years to come. That having been said, its reputation as one of the greatest American pictures of the 1970’s, even all time for the matter, has remained without any challenge in its way. 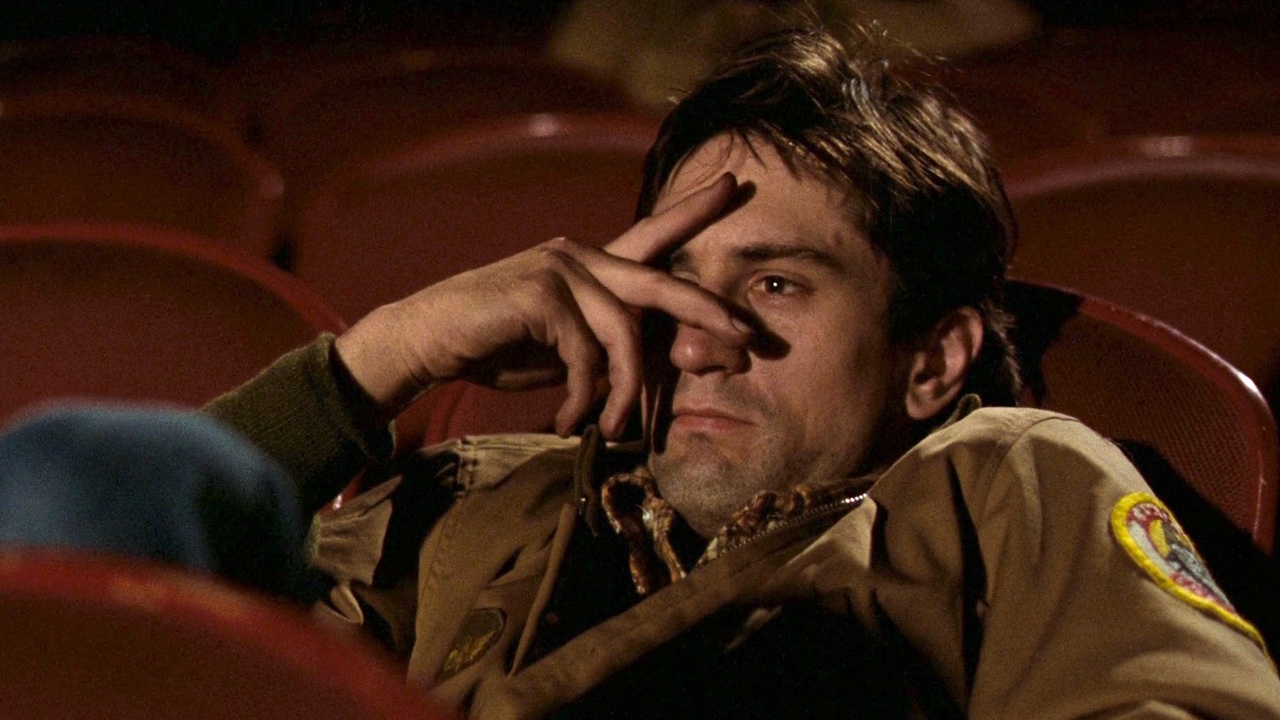 Robert De Niro stars as Travis Bickle, a mind traumatized by his past after having served in the Vietnam War. Back in New York City, he moonlights as a cab driver and the more he weaves through the city during the dark, he finds himself increasingly disgusted with the general direction everything around his point of view is headed towards. He finds himself smitten with Betsy, a woman campaigning for presidential candidate Charles Palantine, and at the same time finds a fascination together with a child prostitute named Iris, whom he intends to drive away from the sleazy lifestyle which she is living within. During the time of Taxi Driver‘s release one can only imagine that these people come by in small amounts. Right now, Taxi Driver is that voice for that slowly growing group of people – maybe those who are not particularly as active about such but know they think it somewhere.

It comes from this representation where I find Taxi Driver to be so highly commendable. From how we are watching the world through the eyes of Travis Bickle, Martin Scorsese and Paul Schrader magnify such voices to show maybe that there’s a greater significance coming out with these sorts of people. Travis Bickle is a lonely man who is still affected by a traumatizing, yet important critical moment of his own life. It shows what damage comes right after to their worldview, yet soon enough there’s a turning point that causes one such to lash out. Taxi Driver is a calling that recognizes such and in the state our world is in right now, maybe that voice is one that deserves to be bigger. Perhaps not to that extreme, but it’s amazing how within the time in which it came out, Martin Scorsese has created something so ahead of its own time.

Maybe there’s something more to Travis Bickle that in turn makes him as fascinating of a figure as this film makes him out to be from beginning to end: it would be how Travis Bickle isn’t really a man different from us. He’s a human being who wanders through New York, fascinated by everything around him but in a more twisted sense, going in regards with how he’s moreso a man that knows the city so well enough not to the point of fascination but to the point of disgust, going down every nook and cranny just to find the very worst of humanity in these areas. And all around, he just sees it to the very point a sense of great rejection has flooded his mind. Scorsese’s portrayal of Travis Bickle’s lash is like that of a set system falling upon its own self.

Robert De Niro’s performance as Travis Bickle is one thing that allows the film to stand out as much as it does, but had there been anything else worthy of note coming out – it would be from how he embodies Bickle just from the bare bones and this performance soon convinces us that Bickle is De Niro himself. A man who knows the area so much to the point he is isolated from a perfect understanding of the world around him. Yet nevertheless Cybill Shepherd is still present in order to show a sense of humanity even out of him is still seeking to come out. Jodie Foster is chilling in this appearance as the twelve-year-old child prostitute whom Travis makes it his goal to save from this disgusting world he is inhabiting. Every small moment that defines these characters defines their atmosphere, one amongst many strengths on both director Martin Scorsese and screenwriter Paul Schrader’s ends.

Taxi Driver may very well be Martin Scorsese’s finest achievement as of yet and amidst the many years of his long career he still hasn’t made anything that tops it. If Scorsese was better at anything than he usually is, it would be from how he studies his protagonists’ descents through their own perspectives of the world they inhabit, something also shown perfectly within The King of Comedy or After Hours – a few more of his best works. Yet there’s a reason Taxi Driver still stands atop all, it would be from how we know such people are still around in such a world that ends up making Bickle’s views of the world he inhabits a thing that roots itself in our mind. It may very well be our world today and we know deep down our disgust is prevalent.