Among many things that I’m fairly certain of, this movie would have not been something that could grab my interest on the spot but Romy and Michele’s High School Reunion just came by and hit me in such an unexpected manner. In some way it brought back my own memories of Clueless and its self-awareness for the sorts of characters it features leading the way. But I never expected anything of this sort to come out from similar veins because upon outlook it would only seem just like a fun, if dated comedy – only to find that I was proven wrong as it moved along. I thought from its outlook it seemed like some buddy comedy aimed towards girls but a different sort of film was what Romy and Michele’s High School Reunion turned out to be, in the best sense at that. 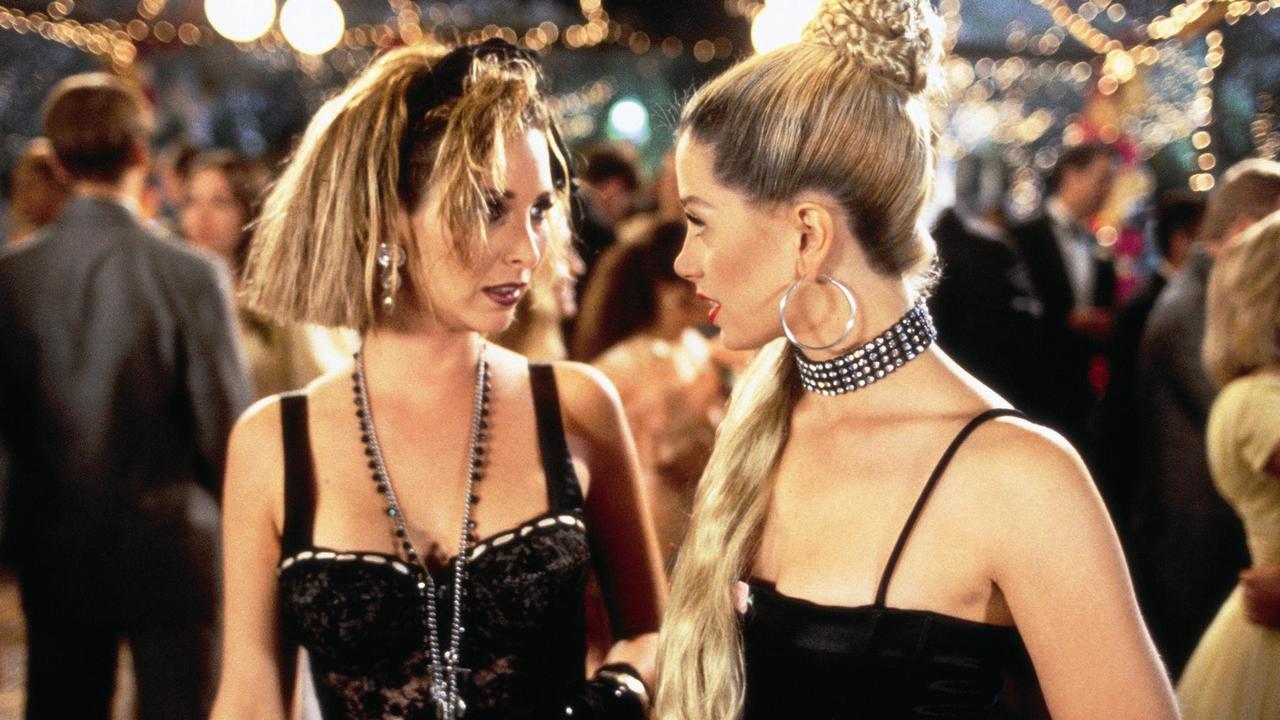 Lisa Kudrow and Mira Sorvino play the titular Romy and Michele: two 28-year-old blonde women who lack much form of success because of their half-witted minds. Romy has found herself achieving something at the very least for at least she’s a cashier whereas Michele has gone unemployed, and now for their ten-year high school reunion they must pretend that they have found success in order to impress their former peers. Prior to the news, they have lived their lives without much ambition for they still move forth single. From here I could easily have picked up an image that would have went on to remind me of any other comedy aimed towards females, but somehow what I got was all the more wonderful and turned my own expectations the other way around.

Romy and Michele’s High School Reunion comes from the stage play Ladies Room written by screenwriter Robin Schiff and at the same time featured Friends star Lisa Kudrow. Ribin Schiff’s screenplay is one amongst only a few things that allows Romy and Michele’s High School Reunion to be a much better film than it really has much right to be. It was the sort of joy that reminded me of what it was that I loved most about Clueless: another film that takes its own appearance as a teen comedy in order to deconstruct its pathos through the arc of its lead character. Romy and Michele’s High School Reunion doesn’t do much that’s different or on the same level but to say it’s anything other than great fun from start to finish is something that I would only find hard to believe, given how much pleasure came out on the spot, even if a lack of subtlety can be felt from time to time.

Lisa Kudrow and Mira Sorvino as Romy and Michele are wonderful together in the sorts of characters that they play, but Robin Schiff’s screenplay is where the joys of their arcs come into play. The two of them embrace the “valley girl” stereotype when it comes to playing girls from high school but having stuck to this sort of caricature all throughout one’s life allows for David Mirkin to expose something else inside. The misery that comes clear from the ugliness of sticking to this caricature comes from the deconstruction of what the stereotype makes of a single person, and it hit me why I was enjoying Romy and Michele as much as I did from there. It wasn’t from the chemistry between Kudrow and Sorvino as the inseparable pair of best friends but rather instead it was how on the inside it actually shows how harmful can conforming to said cliques can be, noting what it did to Romy and Michele.

Alan Cumming was also fairly charming in the role of a former nerd turned hunk, but it was all to be expected of what David Mirkin’s goal to create a satire of perception in a world where stereotypes run abroad at one point of life, and what if conformity still rings in one’s later years. That’s not to say Romy and Michele’s High School Reunion, being a feminist satire of the cliques it depicts is immune to the shortcomings that would find themselves present in these sorts of films, but when it’s most effective, they always bring a great laugh. It’s never limited down to the friendship between Romy and Michele but Alan Cumming’s presence adds more to the joy to be found. Janeane Garofalo’s performance finds itself among the weaker spots, but nevertheless her part is serviceable in aiding the development amidst the arcs of Romy and Michele.

I probably would have turned this movie off in an instant if it succumbed only to every shortcoming that would be present within films of the sorts, but instead I only found myself growing happier with what I was witnessing. But maybe there was an underlying cleverness coming out on David Mirkin’s end knowing how he was a former showrunner for The Simpsons, allowing the full effect of the satire present in Robin Schiff’s screenplay to take place. It finds itself going beyond what would be typical of this subgenre of feel-good comedy (although in a sense it is still coming down to the clothes its protagonists wear), but all throughout it caught me that it never seemed afraid of heading into a darker area than I’d have expected of this sort of film. And all throughout it works to create a wonderfully charming experience.

All images via Buena Vista Pictures.