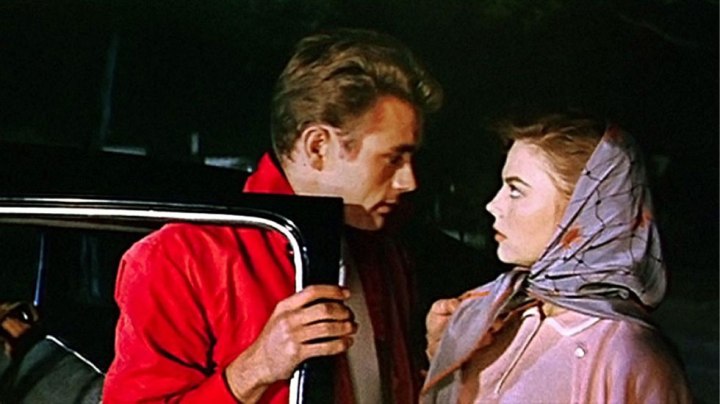 I’m fairly certain that Nicholas Ray didn’t make Rebel Without a Cause as a teen drama back in its day, the way it could have been perceived during its own time. Had this film been a teen drama reflecting the morals of the youth of the period, it’s easy to say that it didn’t age very well, but perhaps it feels reflective of another image of youth that still carries its own bite today. Though to know the style of Nicholas Ray is to know his own tendencies to present an image from an outlook and then distort it, and on this ground he has proven himself to be one of the finest filmmakers working in Hollywood during its classical period. And although Rebel Without a Cause makes a case for the potential the late James Dean had, there’s all the more reason to see this film as a defining moment of its own era. Teen drama it may not be, but as a distorted teen fantasy it finds its own wonder and becomes something incredible.

Rebel Without a Cause carries a premise that only disguises the intentions of Nicholas Ray all the more: for it could easily look like any teen drama. Our lead characters, Jim (James Dean), Judy (Natalie Wood), and Plato (Sal Mineo), are all suffering from their own problems at home. The setup is fairly simple with all three meeting at the same police station after Jim’s arrest, and they’ve had issues with their own way of living, and in the typical teenager fashion, no one understands them better than themselves. This is a premise that could easily have been done once again nowadays, but to note the fact it only represents a small fraction of the teenage population rather than the entire generation, although there’s a common fantasy that teenagers share that only allows for Rebel Without a Cause to ring its place even today. It’s easy to see why some would say that as a teen drama, Rebel Without a Cause hasn’t particularly aged well or appears realistic enough, but there’s a greater power coming upon what it reflects upon.

Instead of looking at Rebel Without a Cause as a dated teen drama, I can only imagine that Nicholas Ray pictures the film instead as a distorted version of a teenager’s fantasy. Distinctively, there’s a lack of realism on Nicholas Ray’s end that feels present within how the film portrays a younger generation, but this lack of realism only makes this commentary stronger. One can read into the way Nicholas Ray has portrayed the lives of American youth as another generation has imagined them, or as paradise for the alienated youth. It seems that from the way Ray is telling a story of youth in Rebel Without a Cause, he’s always acknowledging the fact that it only reflects one group rather than all. This whole film is told in the form of a fantasy, but a distorted one that feels reflective of how generations do not understand one another. There’s a case in point that’s made especially with the relationships that Jim Stark has together with his own father, and in the typical Nicholas Ray fashion it makes this distinctive feeling universal.

James Dean’s public image is another thing to consider because publicity would only make him look like the coolest person alive, and in Rebel Without a Cause, he plays the exact opposite sort of person. In Rebel Without a Cause, the role that he is playing is instead a distorted version of that image. As the title reflects, he, Judy, and Plato all have their problems at home, but as they seek life outside of that, there’s no purpose as to what lies ahead of them. The great tragedy that comes along for his arc can be felt just from the way he looks, but when mixed together with his own charisma, it’s only fitting his performance has given the film the charm it carries. One feels his struggle not because he’s a character that we idolize but because he’s a character that suffers the same strains any other human being would. From the way Ray forms a circle between all three of his leads, there’s a tangible sense of fragility present, allowing the film to take in the impact it leaves.

Melodrama has always been one of Nicholas Ray’s strongest points as a filmmaker, for films like In a Lonely Place and Bigger Than Life have established a stark atmosphere where his characters live within: and to capture the lives of teenagers who live within gangs as a means of fitting in, it helps in encapsulating his themes all the more. Some can go ahead and say that because of the film’s aging look, it could easily help in making Rebel Without a Cause last as a time capsule, but nevertheless this alienation which Ray recognizes is a construct that has only went from generation to generation. But because of the fact both sides of the coin are being depicted here in Rebel Without a Cause makes for a layered exploration of alienation and a lack of understanding from both sides of the spectrum – we may not sympathize with Stark but we feel for him, just as we recognize his parents are unwilling to understand what troubled him.

There’s a load of potential in store for what James Dean could have been, because Rebel Without a Cause distorts what would have been seen by audiences at the time of him – living a life of danger, and unfortunately his life had been cut short at the age of 24. As a matter of fact, all three of the film’s leads have had their tragically premature deaths, with Natalie Wood having drowned at 43 and Sal Mineo being murdered at 37 for his bisexuality, but watching how every one of their roles adds up to a tragedy on display in Rebel Without a Cause only has granted it a lasting effect. It’s easy to see why Nicholas Ray himself deems this as his favourite out of all his films, let alone his best-known film, and even though it might not be him at his very best, it still exerts everything he was best at: he takes what could have been a teen drama representative of his generation but instead turns it into some distorted tragic fantasy.