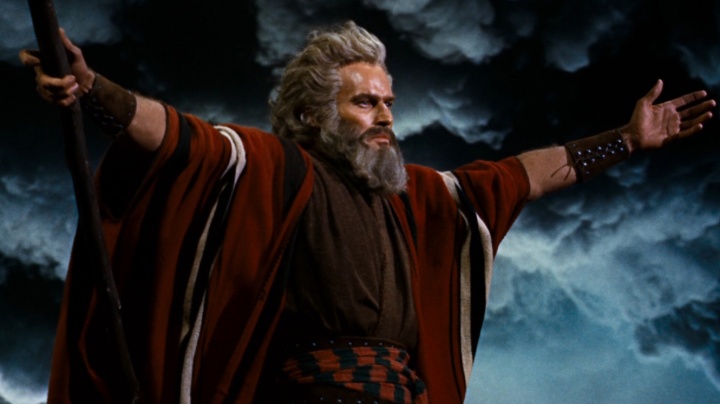 It took me long enough but only now I had finally gotten around to watching Cecil B. DeMille’s final success of The Ten Commandments. Around the Easter season this film always plays on television but I’ve never actually convinced myself to watch it all the way through because I always found the length to be intimidating and coming around to a Hollywood Biblical epic has never been a great priority of mine. It’s easy to admire the craft behind some of these films (Ben-Hur for one I do believe is excellent as it stands), but it can be hard enough wanting a desire to revisit these films. I was fearing exactly that before watching The Ten Commandments but after having finally finished it from start to finish, I think it’s safe to say that I’m glad to have actually watched it for once – although I’d imagine seeing it on the big screen would have been a better experience.

This is a film telling the story of Moses, from his childhood where he was discovered by the Pharaoh’s daughter under Rameses I’s order to kill all Hebrew males, to his rise as a general, and eventual discovery of his own past. This is not the first time Cecil B. DeMille has told this story (he already adapted it for the screen in 1923 as a silent film), but many decades of time have only allowed for possibly something a lot more technically sound on a formal level although there’s so much that a large scale can allow oneself to succumb into. There’s an extent to which I want to say it would be easy to love what The Ten Commandments manages to achieve in the form of storytelling, but even as one who has grown up inside of a Catholic family I can’t say my interest in Biblical epics has always been the strongest and The Ten Commendments in part is representative of where my interest is never always the highest.

My main reason for lacking a particular interest in films of these sorts comes from the fact that these are stories that have been told so many times, it’s hard enough trying to find something new about each one. We’ve had an animated take on this same story in the form of The Prince of Egypt (which I find to be far more compelling as a whole), but even there it still never seemed layered enough for me to say I love it. The Ten Commandments is yet another one of those cases, it just tells its story and moves on, but by the time it finishes up there’s no compulsion felt on the inside to revisit. That’s not to say it takes away from the merits the film carries, but those who want a religious epic that would go beyond surface level knowledge like Pier Paolo Pasolini’s The Gospel According to St. Matthew will not be finding it in The Ten Commandments, rather instead it’s the same stuff to expect from Hollywood.

The scale of The Ten Commandments is one that is so easy to admire, because the production still looks absolutely impressive even today. Whether it be from the costumes, sets, or visual effects, there’s always something from each scene to the last that would be sure to catch the eye (the parting of the Red Sea especially is still a phenomenal sequence to this day). And of course, the length comes in to show as much as they can of the production, but when that isn’t the case, Charlton Heston as Moses is absolutely phenomenal in the role: and it goes beyond my own expectations for The Ten Commandments. In its detailing of Moses’s growth, The Ten Commandments actually finds itself becoming the most compelling because DeMille’s detailing of his character arc is flawless. But aside from him as well as a few other performances, going from Yul Brynner, Edward G. Robinson, and Anne Baxter, this is sadly the most I can say about The Ten Commandments that I actually love.

Arguably the most intimidating thing about The Ten Commandments is the fact that it’s about as long as it is. With the inclusion of the overture, the intermission, and the entr’acte, the film totals at a length of 220 minutes, and that’s a little more than three and a half hours. In an age where this length can find itself justified just as David Lean has managed to do so with Lawrence of Arabia coming six years later, to what extent is The Ten Commandments finding its length justified? Unfortunately the length is a huge problem as the pacing is not always up to par and noticeably, it ends up slowing down from time to time. It also doesn’t help that when the film is slowing down, certain performances end up ringing as silly and we are left with extended conversations between characters that, to some extent, never add up to all that much, and admittedly, I found myself dozing off as a result.

I don’t want to completely write off The Ten Commandments on the count that I had very little interest in watching it to begin with, although now that I have actually experienced it for once, I can safely say without hesitation that I’m glad to have actually witnessed it. While the length was already intimidating enough, The Ten Commandments still manages to provide enough in order to have fun with where it is going. Whether it be within Moses’s character arc especially marked by an incredible performance from Charlton Heston or the parting of the Red Sea, it would be easy to be enamored by the experience from time to time. Sadly, this was also in part what I expected The Ten Commandments to be, occasionally enamoring because of the craft put into such a project but like I would expect of a religious epic coming from Hollywood, not particularly one that does much new with the story it is telling. This falls under a similar category where Gone with the Wind would for myself: easy to admire, but difficult to actually “love.”