General Idi Amin’s rise to power and his own erratic behavior can already make for an interesting subject to capture on film, which is exactly what Kevin Macdonald aimed to capture in The Last King of Scotland. Yet for every trace this film has that can signify something far greater it unfortunately falls down at the hands of another story being told at the exact same time, and this portion isn’t nearly half as interesting. That’s not to say a bad film is what we’re left with but rather instead what we have been given is in part something that could have been great because of the craft behind how a story like this is being captured on film. Then amidst all of that, it stops to tell another. The mix that we are left with is exactly what Kevin Macdonald provides in The Last King of Scotland, forming a product that feels only serviceable at its very best. 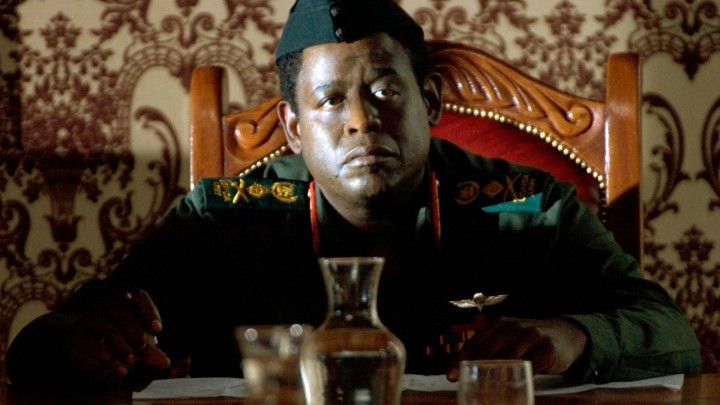 Based on the novel of the same name by Giles Foden, The Last King of Scotland tells a story about the Scottish doctor Nicholas Garrigan and his trials in Uganda just as General Idi Amin is rising into power. The way the film is told tries to capture history by mixing it together with fiction, but there’s a degree to where it actually can be rather interesting and where it can be distracting on the film’s end. Mixing history and fiction isn’t a bad idea, but Kevin Macdonald’s means of telling a story about what it was like during the years where Idi Amin was in power over the people of Uganda only finds itself stinted by whom it’s really about. It could have worked as an account on what sort of a world it was like under his ruling, but unfortunately a limited perspective is what hinders the supposed impact that The Last King of Scotland intends to leave.

This isn’t a film about Idi Amin, but instead it’s a film about a Scottish doctor named Nicholas Garrigan, who never existed in real life. This shouldn’t be something that detriments from the way Kevin Macdonald chooses to tell this story, but the shifts between subject, whenever they come along, are so grating because of the lack of focus it creates on behalf of the narrative. On one hand, you have bits that capture what it was like for anyone living under the ruling of Idi Amin, and when these bits come along, they’re absolutely horrifying to watch – then you have another story, one that almost feels so unfitting within the tone because it plays more along the lines of an adventure-thriller, about Nicholas Garrigan as he is seeking an escape from the brutality he witnesses in order to expose the truth about Idi Amin.

But why exactly do I take such a great issue with the story of Nicholas Garrigan, you may ask? The problem isn’t the fact that he never existed in real life, but considering he is the actual subject of the film and almost never given the prominence provided by the marketing, his bits are not nearly as interesting as those of Idi Amin. And there’s a big problem coming along the way because of the fact that he is the main subject of the film rather than Idi Amin as promised by the marketing, the problem is the fact that the tone his story presents is one that doesn’t fit the narrative at all because it employs a disjointed atmosphere all the way through. James McAvoy’s a talented actor and his bits in the film are fine speaking on behalf of his performance, but the fact that his bits aren’t interesting and end up turning into an adventure thriller rather than a historical account can be felt as the film enters its third act, and the worst crime it commits is present: sidelining something that is far more interesting.

However, as Idi Amin, the dimensions present in Forest Whitaker’s performance are absolutely astounding. Whitaker, a great actor, only played a role like Idi Amin the only way it could possibly have been done on the screen, it’s an absolutely terrifying performance to watch especially if one is familiar with the subject. But when one looks at Idi Amin’s own descent into madness from the character he introduces himself to Nicholas as, the real question that needs to be asked is why wasn’t he the primary focus of the film? What I can only imagine is that in a figure as tyrannical and egotistical as Idi Amin, there would be something more to explore about his own character because the most that comes around is present from interactions with Nicholas Garrigan. When Idi Amin comes on the screen as played by Forest Whitaker, suddenly a generic adventure-drama-thriller turns into something greater. Then in typical biopic fashion, it seems to carry upon performance.

The Last King of Scotland isn’t even a film about Idi Amin’s rise to power, but it should have been. Rather instead, if you’ll at least find the James McAvoy story compelling enough, you might be able to find something to admire but considering the subject that Kevin Macdonald wanted to make a film about, he seems to have instead created a product that is just confused in itself at its very best. Parts of this can show signs of a great film about how Idi Amin’s own ego has destroyed his own concept of humanity, but then there comes another story which is what the film is really about, and suddenly what we are given is far less compelling. At the very least, the performances can make this worth as much as a single watch (especially that of Forest Whitaker), but there rises another common trait about the biopic, this is where the film finds its energy being driven from rather than the subject it carries.

All images via Film4.