Zach Braff’s presence, let alone involvement in anything is enough to turn me away from watching something. The thought of a Zach Braff-directed remake of the 1979 comedy of the same name was already set to put me off no matter who would have been cast, and add the fact that Theodore Melfi of St. Vincent and Hidden Figures would be writing the screenplay, I’d only have imagined that the most it can possibly be is a harmless comedy that’ll come and go. It caught me by surprise that this was also the first time Zach Braff had ever done something that didn’t leave me feeling any sort of anger or annoyance given the bad taste his quirk in Garden State and Wish I Was Here had left in my mouth – but at the same time it was also the most I could even have expected Going in Style to be. Something that’d come and go without any real impact. 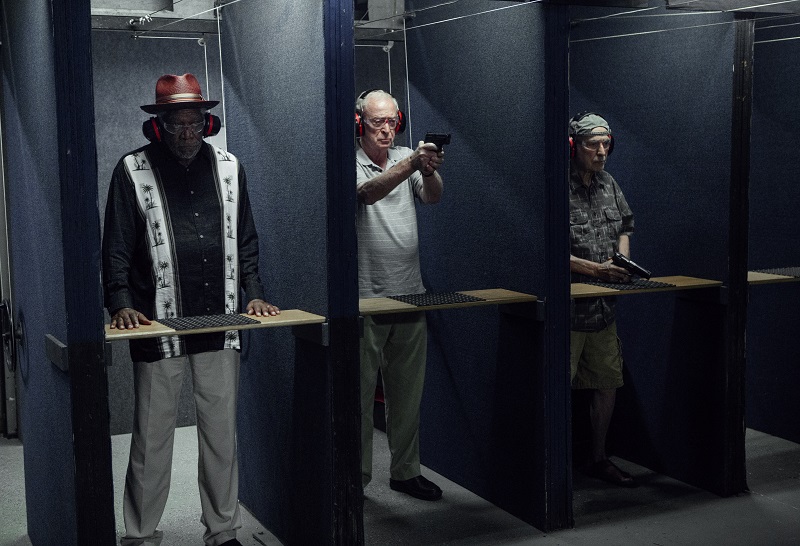 Considering the fact that this isn’t even at all the sort of comedy that I would ever have expected Zach Braff to direct, there was a part of me that actually had some hope because I already found his quirky tendencies in his previous directorial efforts to be enough to turn me away, and there was also a sense of optimism arising because he was nowhere to be found amongst the cast. Michael Caine, Morgan Freeman, and Alan Arkin star as a group of retired friends who decide after their pensions have been cancelled to go ahead and rob a bank in order to finance themselves. Three actors already far past their prime hitting up more glory could only be enough to keep one watching the screen and that’s where I have to admit Going in Style managed to keep my attention while it lasted. If that was all you wanted to see, Going in Style surely won’t disappoint but I was hoping for something funnier.

Where Going in Style works is present within the chemistry of all three leads. Caine, Freeman, and Arkin (my personal favourite of the bunch) make for one immensely likable trio as elderly people only seeking to make their own lives better by hitting one big score. All the heart of the film is present within their own cynical antics especially as they go around causing trouble and living glory within their own prime. They aren’t especially remarkable but their performances, whether it come down to the comedic timing or just the personality that all of them incorporate into their characters, are enough to make Going in Style adequate for a single viewing. But of the many things that could ever be expected of Going in Style, this was a particularly unsurprising note because Braff allows their charisma to shine everywhere it pleases and there’s an incredible sense of likability coming at hand from their energy.

Sadly this joy doesn’t last very long because there could have been a whole other area to which the film’s premise could have taken its humour within and this brings up one of my main problems with Going in Style: it just isn’t cynical enough. It seems to stay within one gray area of safety but never anywhere does it take the risk to go outside and as a result, a multitude of the jokes end up falling flat on their own face. It’s hard enough even trying to tell whether or not the film wants to be funny on the spot but it’s easy to recognize the very best moments as they stick out from all the rest. Among many things I would have expected to have come under Zach Braff’s direction was an awkwardness arising in attempted comedic timing that would in turn stint the experience but at least it was never grating here, rather instead there’s no real reaction that comes out either positive or negative because it has trouble even trying to let itself out on the spot.

I’m not fairly certain what exactly did Theodore Melfi have in mind as he was writing the screenplay but considering the leads minus Arkin all have a much more dramatic backstory coming out on their behalf, it doesn’t seem to jive well with the tone the film wants to set in place. On some occasions it wants to be incredibly cynical especially regarding the state of its leads and what they have been driven to at this point of their own lives, but then comes another shift where suddenly it wants to become something sweet and the clarity only finds itself blurring away. Like I would have expected out of Zach Braff, it just seems to stay within a grey area, and doesn’t want to move out at all. At the very least it has the respect not stick to repeating a joke about how we have senior citizens not understanding the world around them because of their age through these moments but a better mix could have at least made for something more cynical and more interesting for the matter.

I’m surprised about how I didn’t find myself hating this one despite Zach Braff’s involvement, but that’s among many things that came out from Going in Style I’m thankful about. To see Michael Caine, Morgan Freeman, and Alan Arkin still living within their glory days once again was a happy sight especially because they never let any of their charisma die away. But I only wish that because of the potential behind an idea like this, it could have gone more towards a cynical area. That’s not to say Going in Style is bad, it’s actually just a relatively harmless comedy made watchable thanks to the energy that all three leads place into their roles, but that’s unsurprising when you consider who’s behind each. Going in Style has more charm than anything else Zach Braff has ever been involved with, but you’re taking that from someone who finds the sheer presence of him annoying in all regard. Thankfully it wasn’t so much a bother here because this didn’t feel nearly as aggravating an experience as something like Garden State, it’s just inoffensive fluff that’s occasionally funny.