Woody Allen’s career has only brought out highs and lows all over the different eras which he spans, for the days of thoughtful romantic comedies like Annie Hall and Manhattan are evidently long gone. Having consistently directed one film a year, there was only a point to which Allen’s experimentation doesn’t seem to find itself working nearly as much as it used to and at its worst, the redundance has only come to a point of annoyance and films like Irrational Man come out. But knowing Allen’s trademarks could have also called for Irrational Man to work in an almost self-reflexive manner, knowing how he writes the dialogue and exchanges between his characters. The case with Irrational Man could be that maybe what’s being sought here is far too on the nose and almost to the point of boredom, reminding its own viewers that gone are the days of Allen consistently offering an insightful perspective about the world around oneself and now he feels like a wannabe of himself. 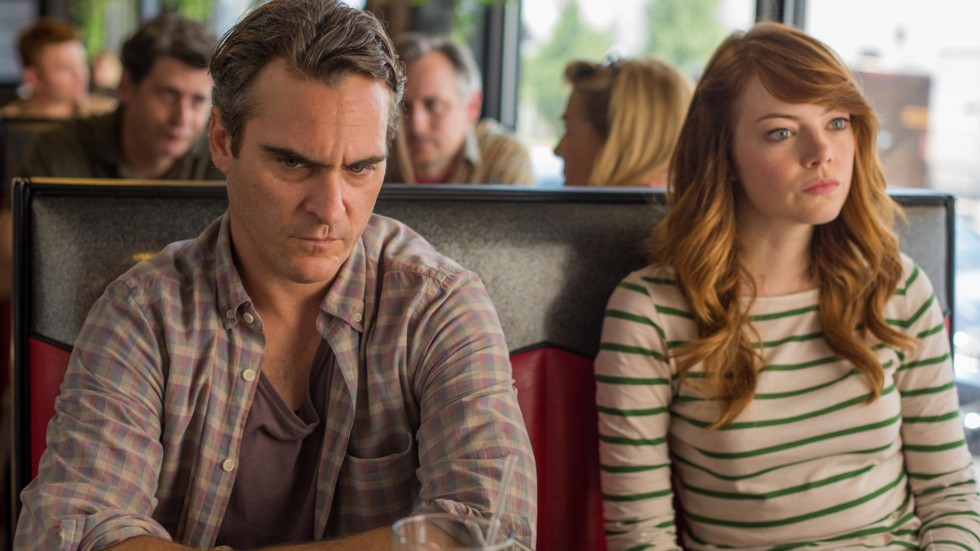 Abe Lucas is a philosophy scholar who finds himself getting romantically involved with one of his own students, Jill Pollard. Lucas is played by Joaquin Phoenix and Jill is played by Emma Stone. Lucas, who is already suffering from an existential crisis of his own builds another relationship together with another unstable student played. by Parker Posey. And quickly enough it shifts over to a crime drama, the moment Abe and Jill overhear a conversation within a cafe, giving Abe an idea to commit a crime by poisoning a corrupt judge. In truth, I was already put off from the idea of Woody Allen making another crime drama because the last time he had made such (Cassandra’s Dream), it only resulted in what would quickly become one of his worst films – a mistake made yet again here.

There was once a point in which Woody Allen’s sense of self-referentiality had only consistently offered a thoughtful product one after another but the case with Irrational Man does not present such. Despite promise from an explicitly self-depreciating premise, Allen never made any of Irrational Man‘s long philosophical rambles mean anything because we recognize Allen’s creation as an evidently inauthentic one. Allen is working with a dull script here, because we know already that he is trying to play this film in such a self-deprecatory manner, but the problem is present when Allen isn’t presenting anything interesting to say even behind how he constructed a film that recognizes how inauthentic exchanges between his characters feel, it just feels there to reinforce a rambling perspective.

It isn’t the fact that his characters are obviously caricatures that makes Irrational Man one of his lesser efforts, but it’s the fact that Allen is too focused on his own pseudo-philosophical ramble that eventually turns the film’s narrative into meandering nonsense. It’s easy to find a sense of focus from his 70’s output where he kept everything simple and accessible, but when looking at the majority of his 21st century output, he has only turned his own style somewhat tiresome in a sense that he’s repeating what he has been doing for many years. Even with what one can say about Woody Allen’s public image and how it ties along to what’s being presented in Irrational Man, the concept of a romance developing between one younger and a much older person was never a new one. Irrational Man isn’t doing anything to treat its concept as such – it just has pseudo-intellectuals as if they’re not annoying enough in any other Allen.

Despite all of this, the performances and Darius Khondji’s cinematography prove themselves to be saving graces. Joaquin Phoenix, for as inconsistent as his filmography has shown itself to be, gives the film his all even if his character never rang natural. Emma Stone’s character on the other hand is another scenario, because it’s easily the best performance in the film by a mile. Parker Posey, who often goes out underrated, does the best that she can – but for as much as Allen may be a skilled enough director when it comes to directing his own actors, it becomes difficult for them to emote properly when he’s presenting them on the screen as a means of showing his own trademarks – something that has plagued his 21st century output. The film’s nice to look at, thanks to the beautiful cinematography, but even that can’t distract from the grating ramble it showcases.

It hasn’t been easy looking out for the films of Woody Allen knowing what he can be at his best and what he can be at his worst, and the majority of his 21st century output only puts on full display of what happens as the worst of his own talents are shown on the screen. I was hoping to find something of great promise because Irrational Man already shows from its premise it could be more self-deprecatory compared to Allen’s previous works – but it just shows all the worst qualities of a Woody Allen script on the spot. Oftentimes it sounds like it’s smart, but ultimately it signifies nothing.