William Wyler’s films are award favourites but I haven’t always loved his work consistently. At his best, he’s created tender melodramas or entertaining comedies and at his worst, he feels unbelievably bloated. The Best Years of Our Lives, at a staggering length of 172 minutes, feels at risk of carrying the bloatedness of Wyler at his worst, but the way he spends time here says otherwise, for not only is a thoughtful melodrama about veterans coming home from war present and instead a staple of its own era that to this day remains one of the most self-reflexive pieces of cinema ever made. But if the title weren’t already an indicator, the very nature of the story being told can bring one in for something tender. 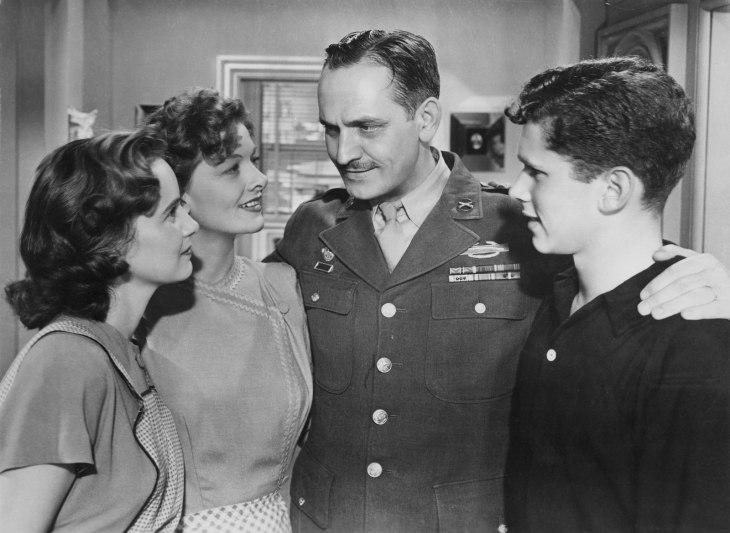 This film tells a story about soldiers who return home after having fought during WWII, returning to both a changed state of their own lives as well as a new lifestyle. In the most Hollywood way possible, this is a story that seems like it could be told as an optimistic one and to some extent it is, but at the same time the knowledge of what The Best Years of Our Lives is encouraging its viewers to reflect upon is a prime factor in regards to why it still feels so resonant today. And in that sense, The Best Years of Our Lives actually feels quite modern – especially when one comes to think of how it is treating the subject matter considering the era. It isn’t just a film about adjusting to how America has changed after the war but how uncertain the society had become so shortly afterward.

A question to be asked is made clear from the film’s title, what are “the best years of our lives” defined by? The best years of our lives are defined by experience, but the amount of time being spent almost having died amidst a battlefield would not signify such a time. The soldiers as we know them are just ordinary people who are trying to live average, mundane lives by a routine but not without their own suffering at the hands of post-traumatic stress disorder as well as a hostile political climate which pertains to the time. The film’s title already leaves its own viewers hanging at the thought about what a time is like for such people, and how difficult the return had only proved itself to be, having lost a sense of the ordinary self on the battlefield.

Highlighting how the film puts PTSD in the spotlight, the most beautiful thing about The Best Years of Our Lives is that it gets down to the bone to its own effects on the psychology of its characters, creating one of the most humanistic products of classic Hollywood’s Golden Age. But for how William Wyler blends melodrama together with this subversive psychological approach for the time being only goes to further show a more thoughtful side to the film – because it is hard enough to imagine what can happen at a time where humanity has lost touch with what they are. We don’t need to see the war in order to get a grasp of how it affected their own perceptions of life, and not only have we acquired an anti-war stance but also a psychological profile that only finds itself ringing as universal.

If anything else needed to be said, the cast is phenomenal all across the board. It’s easy enough to lay your own praises for Myrna Loy and Fredric March considering they are already the best known from the cast but there comes Harold Russell, who wasn’t an actor. He was a genuine veteran that was playing down from his heart, showing viewers how war affected him from first hand experience. He won two Oscars for this performance, one competitive and one honorary – and even though it may not be wise to put stock into their decisions, it’s easy to see why his role as the amputee Homer Parrish would be highlighted.

At near three hours, this film could have been one that seemed too long at the hands of a melodrama that details the romances of these people trying to cope with what has become of them. But instead it’s a film that warrants every minute of that length for it only rings beautifully in today’s political climate. And considering the moments right after the war were sought by people as “the best years of our lives,” William Wyler confronted that stance by giving a glimpse at what had been lost within what appears so ordinary. Because there is yet another battle coming back for soldiers upon their return home. Yet the film’s reflexive nature only calls for it to be sought more within this day and age, because of what the political climate does to our souls. These cannot be the best years of our lives, we much only look back at what they really are to us.