How do you describe that feeling of being in love for the first time? When we’re young, we discover that emotion rushes through us and it’s something that roots itself inside of our head for as long as we keep it there. And in the film’s closing lines, Call Me by Your Name sums up how we like to keep that experience in our hearts, “I remember everything.” But i also think it’s worth noting that Call Me by Your Name isn’t exactly a love story in the traditional sense – it’s about what happens as that feeling of experiencing love strikes you for the first time. So how exactly does Luca Guadagnino manage to make a film that resonates with the experience? The best thing to feel as you watch Call Me by Your Name comes forth when you recognize it coming back to you like a memory. 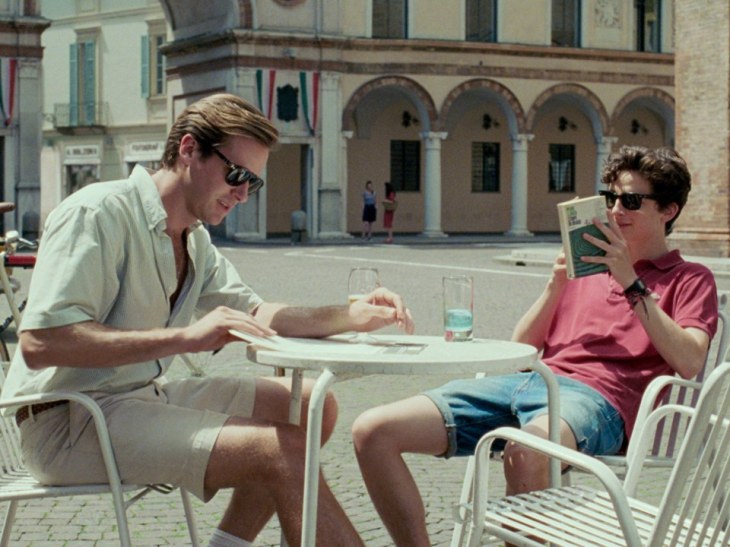 Elio Perlman is 17 years old. He lives in the Italian countryside together with his Jewish-American parents. And during the summer, his father, an archaeology professor, invites a young graduate student, Oliver, to stay with them. Oliver introduces himself at first as the complete opposite of Elio’s introverted personality, having already found comfort in books and music. But the two spend more time together, and a friendship emerges between them, one that blossoms into more. The way Luca Guadagnino builds up this relationship from the first frame to the last plays itself out like that memory of being unsure where to go from where you are, and trying to find a place of your own solace. It all stings like a memory, and reaches out in the best way possible.

When I look at Elio’s introverted personality, I thought to myself about how I would cope with the pace of everything moving around me. Even around friends, we can feel that Elio doesn’t see that he is truly happy, and then Oliver comes by to break a new boundary for him. For Elio, it was complicated – because he knew he experienced something that he hadn’t before. As Sufjan Stevens’s song sums the experience, “Oh, will the wonders ever cease? / Blessed be the mystery of love” – capturing perfectly what Elio is feeling on the inside. He is overwhelmed by what he had come by to see for once, and is at first unsure how to express it. But that feeling of being in love is never easy to capture, and the tenderness of Luca Guadagnino’s approach to how it affected the 17-year-old Elio makes this experience universal. Aided by a magnetic performance by Timothée Chalamet, it’s hard not to be drawn in by a story telling itself like a memory the way that Luca Guadagnino shows it to us.

Together with the beautiful imagery of Sayombhu Mukdeeprom, the way that Call Me by Your Name shows us the Italian countryside evokes a sense of familiarity – because as exquisite as it appears to the human eye, it all feels like an area that Elio knows by heart. And seeking to find a new experience has only come clearer with Oliver – because Oliver brings a new light into Elio’s life. And from how it captures small gestures between the interactions of Elio and Oliver, we feel something greater on the inside. We feel something greater because the feeling of being trapped in your own introversion will make even the smallest moments seem so large by your own experience. These small interactions are the moments we know we want to remember, because in our hearts they still feel big enough to affect us on the inside.

Yet as the film blossoms into the more romantic territory, what Luca Guadagnino makes of Elio and Oliver soon reflects pain. The feeling of love isn’t one that will last forever, no matter how much we wish it were to happen. We know from the small interactions that something more moving is set to come by, because we know that the experience of being in love isn’t going to last forever so we want to make the most of what we can live within. Coming to terms with the fact it won’t be everlasting is difficult, especially for a young age – and yet that’s where Call Me by Your Name reaches its most affecting moments. These are the moments that stick most because we remember everything that made us happy. We remember everything that truly gave us the sense of happiness that Elio had managed to find in his life, all for it to be taken away so quickly.

I don’t know if there’s anything more to be said about Call Me by Your Name that hasn’t already been said, but everything about the experience just feels so perfect. Everything is so perfect because we know that this feeling is so familiar to us, and it plays like a memory we want to live through once again. And like Oliver has told Elio, “I remember everything.” This movie is the experience of remembering how much we were affected as we felt within the moment of our own comfort – and the most beautiful thing about it is that we can recognize it as universal. As I was watching Call Me by Your Name, I felt that impulse coming to me, because I knew as I was in that moment, I remembered that feeling, and I couldn’t describe it. And I don’t know if I really can.

All images via Sony Pictures Classics.