If only my own game nights together with the few friends I have were nearly half as exciting as what Game Night had shown that they can be like. The most recent film from Vacation directors and Horrible Bosses writers Jonathan Goldstein and John Francis Daley proves itself to be a more entertaining ride than their names would have expected at first. What I expected was something merely silly like the most entertaining comedies can be, only to have been proven wrong by the fact that Game Night is being treated like an actual game night and as the pieces of the puzzle are being put together, the enthusiasm rises up on the spot. That’s the best thing that you can also say about Game Night, it’s about as energetic and feels competitive like an actual game night with friends. 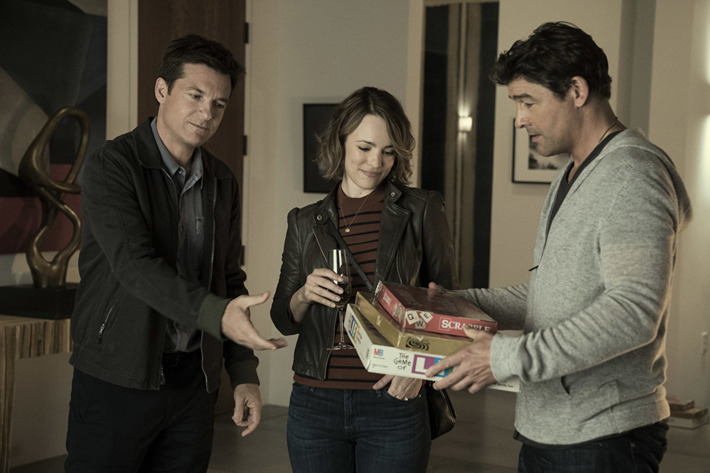 Jason Bateman and Rachel McAdams star as Max and Annie, a husband and wife who meet by chance at a bar during trivia night and after marriage. They arrange a game night with other friends every now and then and never lose touch of heir competitive nature, but one night Max’s brother Brooks comes out of the blue to host another type of “game night” going beyond their habits of playing board games or trivia games with one another and instead a staged murder mystery. But soon the “murder mystery” ends up leading them down another dangerous path. Like a good guessing game, Game Night knows how to perfectly build up a mystery and leave you guessing what’s only going to come next – like a game night that Kyle Chandler’s character promises they will all remember.

The most entertaining aspects of Game Night first come clear through the film’s delivery of cringe comedy, particularly from the presence of Jesse Plemons. But in keeping up with how the film manages to establish a more unsettling atmosphere just around its very premise is where the darkest aspects of this film’s comedy find themselves growing stronger. Taking the very idea of a fun game night between friends and making the circumstances feel so much more uncomfortable, not only forming a sense of unease but making the most familiar scenario all the more entertaining. On any day, this could be a fun romantic comedy about a competitive husband and wife, but the moment it turns into a murder mystery where there’s nothing to be sure of is where subversion is present and it’s funnier from there onward.

What carries the film all throughout is the chemistry between Jason Bateman and Rachel McAdams. For one, Bateman’s presence only remains as likeable as he’s always been and McAdams is allowed to be herself and forming a perfect duo within the two. But it also surprises me that this came from the directors of Vacation of all people, because the comedy is directed with such wonderful timing and at a running time of only 100 minutes, it all moves by so quickly. It all works perfectly, at least until the overlong third act which throws too many twists at the last minute – but that’s not to take away from everything that came prior. It lessens the overall impact to a certain extent because the elaborate plot seems much for a comedy, but at least not badly enough to dampen just how fun the whole ride has been.

For the first hour, this is some of the most fun I’ve had with a comedy in a while – but once the third act comes by it starts to play out like The Game, where it just twists itself one too many times to the point where I lose interest and ask myself if the payoff was really worth it. At least before that, my fondness of Bateman and McAdams has only escalated from where it already was. Here’s also hoping that we’ll get to see Jesse Plemons in bigger roles within the future, because he can already carry an entire spin-off with just his character. I’m surprised how a movie like this can be as energetic as it is, being directed by the guys behind Vacation of all things.