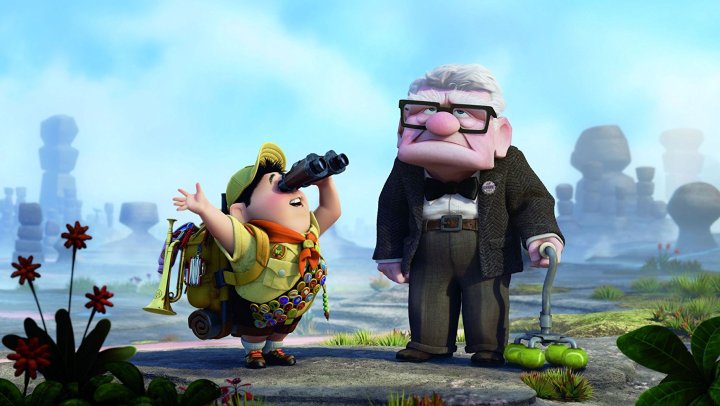 Looking at many of Pixar’s films now I can’t seem to let go of the nostalgia that they have left upon me. I’ve noted that Pixar was responsible for many of my own happiest childhood memories with every film of theirs that I saw in theaters at the end of every school year, but Up in particular seems to linger in a way that I’ve found a number of their others haven’t. I’ve hung onto many of the rest on the count that they did make childhood better for myself but something about Up still feels important now, and it only took the many eventual rewatches as an adult to realize what makes this one so special: perhaps all starting with the fact that it is led by Pixar’s second oldest protagonist, but for audiences who have grown up with them over the years it almost feels like a nice testament towards where they are set to go later on in their own lives. 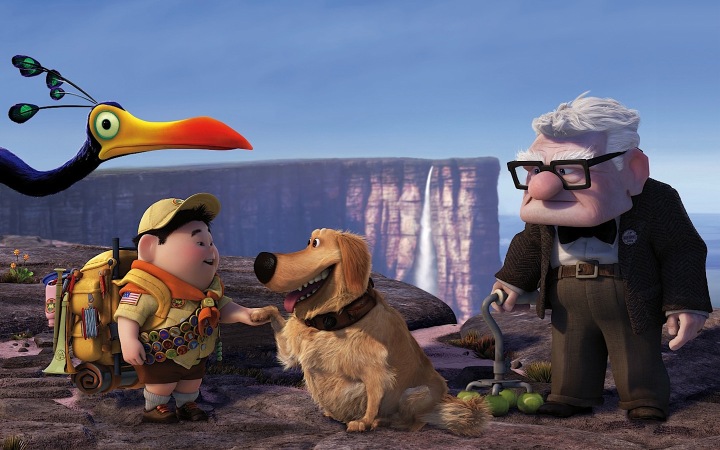 This film’s premise is one that has its childlike nature from the outside, considering how it revolves around the concept of a house being lifted as a result of thousands of balloons having been tied to the fireplace. This house is owned by none other than the cranky balloon salesman Carl Fredricksen, a 78-year-old widower who had made a promise to his late wife to go out and explore South America – inadvertently taking the young Wilderness Explorer Russell as a stowaway. It is clear from here that Pixar has set up a basic adventure film for audiences of all sorts to come along the ride, but the greatest pleasures that have come around from watching Up are present within the irony of how dark its premise really is. It’s another adventure for younger viewers to start, but for the adult viewers it almost feels like a dark reminder about one’s own direction within life.

If the bleak nature of Up‘s premise could ever have made itself clearer, an opening reel would have set the film’s tone into place. The film opens with a newsreel being viewed by our protagonist when he was a child, his eventual meetup with Ellie as it blossoms into a romance as they age – and what happens after this piece of Carl’s own life goes missing. In the optimism of the film’s opening sequence, it is a signal towards what one wants out of their own lives as they grow older – but as Carl and Ellie have aged it has only become forgotten, and suppressed even more after this sequence has concluded. Russell comes by and symbolizes what was missing from Carl and Ellie’s married life, for when they stayed together their romance was indeed as ordinary as could be – but never any less touching as is. Both of them were adventurous souls who retained a sense of youth in them as they had physically grown older, like a completed puzzle because they were together. As they had grown older, they had only begun to lose the true sense of adventure that they had sought as a child yet it had remained a habit they stuck to. In the opening sequence alone, Pixar has captured the essence of growing older in a sense the best coming-of-age films can do so, reflecting the depressing realm of reality.

But when you note how Carl Fredricksen is their second oldest leading character (only behind WALL-E, who has been around for at least 700 years), the resonance that Up carries even with older viewers is clear. At a young age it is easy to aspire to become something of greater meaning, but maybe at old age you will begin to realize how much of what motivated your life has been missing from you the whole time. In Carl, it was that sense of adventure that he and Ellie had sought, but after her death he had become bitter and yet he retained that promise to go to Paradise Falls. This new adventure that started with his house being carried by balloons symbolizes in a sense another trial for his own grief with a new adventure coming forth. And how exactly does it all come full circle?

When it comes to Pixar’s own villains, what I had always seen in Charles Muntz was something that I wish to see more out of their villains in general. Charles Muntz started out as an idol for Carl Fredricksen, but after having been subjected to humiliation he had somehow stayed in Paradise Falls for him and Carl to meet up eventually – at their old age. And the many years in which he had stayed in Paradise Falls came at a great cost, for they had rendered him paranoid and even into a killer. But his motivations were never particularly “evil,” which stood out to me atop many Pixar villains because his motivation is one that still felt rational even to him. Add Christopher Plummer’s voice, and then it creates a figure most menacing, the perfect presence for any villain that Pixar can create. He was frightening as a child, but even to some extent you feel sorry because of what’s happened to him in his past – the sort of villain that I’ve always loved.

Although in hindsight, when you look back at how the arcs of Muntz and Fredricksen mirror each other – they show complete opposite ends of the same spectrum. Fredricksen had eventually found something that had been missing even from his married life while on his journey to Paradise Falls, and Muntz had stayed into position therefore his psychology has only been stinted as is. It is stinted in a sense that Muntz had never experienced what it was like to be ambitious, for he lost what meant most to him in the same way that Carl has done so with Ellie. Muntz has not been able to let go over so many years, and yet Carl has lived within this darkness long enough for him to become a cranky old man. This journey to Paradise Falls has also become symbolic for Carl trying to overcome his grief – therefore he ultimately had to let go of his shadows and one step comes by from the meeting of his former idol to see how his own sanity had been lost after suffering a loss of his own. From this moment on, he realizes that Ellie hasn’t been lost from him after all – he was fulfilling what remained of her spirit inside of him and took it to where she had promised, as signified by the heartwarming final image of the film.

The consensus also has come to an agreement that Up‘s opening sequence with Carl and Ellie are the best moments of the film. Inarguably it is one of the most heartbreaking sequences, but Ellie’s shadow still lingers over Carl through the form of the house which he managed to lift off the ground and take all the way to South America. But I think what is understated is the emotional impact of the entire journey in itself, as revealed within the climax. In this climax, Carl feels invigorated because he knows now that Ellie’s spirit has been fulfilled with the time that they had spent together, and now he has come along on another adventure with Russell – who was to him the child that he and Ellie had were unable to carry. It seems brief, but the emotional weight of the scene I would argue is on the same level as the opening, only strengthened by a final image that reveals a trial had been completed, thus a newfound freedom is reborn.

I don’t think all of Up works (the “hiding under the porch” explanation for stowaways coming on board the floating house was one that always caught me) but I’m too captivated by it to really care about whatever issues I have. As expected from Pixar, it’s beautifully animated and it offers enough wit to entertain both children and adults, but looking at it now it’s somehow more emotionally poignant than I had remembered it. And perhaps a useless side note at that, but this was the first movie to which I remembered crying to in the theater, and it was over the opening scene – now I find myself moved all the more by what Pete Docter had made of Carl’s journey as revealed from the note within the climax. As we grow older, the desire to persevere goes away if we think we have everything in our lives as perfect as we believe it to be in our happiness. And Up is a film that treasures the importance of always moving ahead.