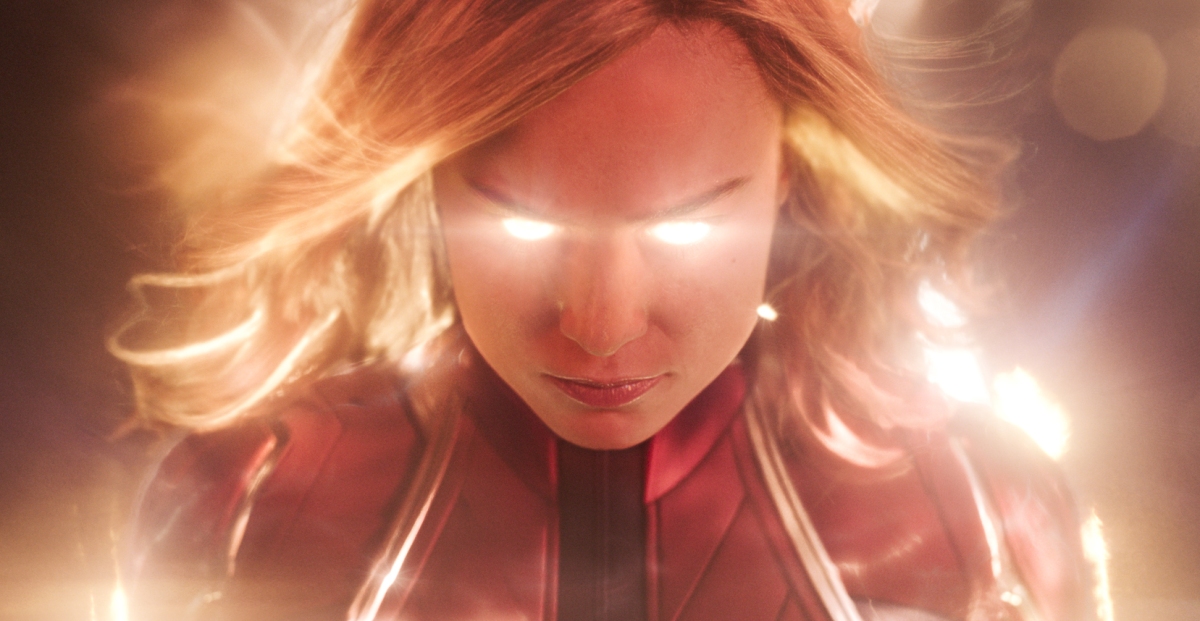 …hiring Anna Boden and Ryan Fleck to direct a major tentpole superhero film is like getting Jenny Lewis to form an arena rock supergroup to play at Madison Square Garden. After you manage to convince yourself that it’s not a joke, the next question becomes “How does someone as introspective and particular as Jenny Fucking Lewis get interested in doing something big, catchy, and crowd-pleasing?”

It’s absurd to think that Captain Marvel is actually going to be a reflective indie drama about a young woman trying to make her way in a complicated world as she comes to terms with the Kree being that is fused within her. The core of it is probably going to involve a lot of impressive fighting over a glowing doodad that has the power to remake or destroy the world, set to a big ol’ Brian Tyler score and hopefully laid against a strong emotional spine. Still, putting Boden and Fleck on the job gives everything around that core the potential to be very, very interesting.

Yours Truly, “How Boden and Fleck Changes the Game for Marvel Studios and Captain Marvel,” Deadshirt.net, 4/25/17

I’m honestly shocked at how close to the mark I was on this.

Even as I was making that call, I was mentally hedging my bets. I felt like whatever the married filmmaking team would bring to Captain Marvel had to be different than the stuff that propelled movies like Half Nelson, Sugar, and Mississippi Grind. The game changes significantly when you’re doing tentpoles; a can-do Brooklyn spirit only gets you so far when you have to deal with multiple VFX houses, coordinate with a second unit that shoots your action scenes as opposed to just inserts, take corporate considerations into account, and so many other headaches that get in the way of the art. And that’s before you remember that any work you do for Marvel has to be tied into its greater Cinematic Universe—something that severely dampened the lovable Amblinesque spirit of Ant-Man and the Wasp.

And on one level, it feels like the machine broke them. Captain Marvel is the work of someone who isn’t super comfortable playing to anything bigger than the orchestra halls they’re used to. The action scenes are mostly okay (with one standout I’ll talk about in a bit), but poorly paced; Boden and Fleck try to infuse them with a fluid, unpredictable sensibility, but it comes at a cost the film can’t entirely cover. An example: There’s an early action scene where Carol Danvers (Brie Larson) is fighting off a bunch of Skrull warriors; one of them growls at her in a poor attempt to intimidate her, but Carol mockingly growls back before kicking his ass. That’s a gag that was used in Stephen Sommers’ The Mummy—not that I’m calling foul. But whereas Sommers was smart enough to sell the gag by slowing down the cutting and using close-ups to give the audience a chance to fully absorb it, Boden/Fleck just runs the play like it was an afterthought. Granted, that’s what makes it not, you know, outright theft, but the upshot is it lacks impact—and it’s a problem with all the action scenes in this ostensible action movie. I can’t tell you how many times I wanted to rub this thing’s shoulders and whisper, “Breathe.”

There’s other little things that detract from the whole experience of the film: There’s a major continuity error in the first fight that even I, Mr. “Plot Hole Culture Is A Blight On Film Appreciation,” feel compelled to call out (though it’s such a stupid mistake I wouldn’t be surprised if I missed something that explained it) [UPDATE 6/18/19: Without going into detail, I sure did. I’m leaving this up for academic purposes, but feel free to disregard this complaint.], and the alien designs are a little samey, making it difficult to tell one character from another sometimes. As a tentpole, it doesn’t quite hit the spot. It’s mid-tier MCU; plenty good, just not impressive when compared to what some of these films have been able to do within Marvel’s tight constraints. Yet as unimpressive as that core is, everything swirling around it is interesting and flat-out entertaining, keeping this movie heroically afloat. It’s not exactly how I called it, but I’ll sure take it.

Captain Marvel is set in 1995, but we don’t get to Earth until about the end of the first act. We’re introduced to Carol on a distant planet that’s home to an advanced civilization, the Kree. The Kree are locked in a war with the shapeshifting Skrulls, who keep invading and colonizing border planets by disguising themselves as ordinary citizens of the galaxy. Carol—who lost her memory six years prior—is part of a specialized task force led by her mentor Yon-Rogg (Jude Law). One of their missions goes bad, placing Carol in the clutches of Talos (perennial bad guy Ben Mendelsohn). Talos is desperate to extract information about possible lightspeed technology from Carol’s memories, alerting her to the whole other life she had on Earth, complete with a best friend (Lashana Lynch) and a very different kind of mentor (Annette Bening). Her escape crash-lands her into a Blockbuster Video, and with the help of a young Nick Fury (Samuel L. Jackson), the mission is set: Get her hands on this tech before the Skrulls do, and figure out why she knows so much about it.

The script’s thematic work is smart, building off the talent Skrulls have for impersonation to talk a little bit about identity and perception, how we define being a soldier or a woman. The twists of the narrative are fairly easy to see coming if you’ve studied enough MCU movies (there’s plenty of shared DNA with The Winter Soldier), but they mostly feel appropriate and earned rather than hackneyed. I’ll steer clear of major spoilers, but I’d like to go in depth here: during a spar with Yon-Rogg in the film’s opening minutes, Carol is cautioned by her mentor not to let her emotions get the better of her in a fight. Those who remember Guardians of the Galaxy know that Kree government isn’t exactly considered noble or innocent; those that don’t might have their red flags up anyway because a man telling a woman not to get emotional is usually a sign that he’s a douchebag. Yet the context softens it at first glance; control is important in the study of any martial art, and having this conversation in the second scene of the film, during a spar, suggests to the genre-savvy viewer that Carol’s arc will involve controlling those pesky emotions of hers to become a stronger fighter.

Of course, that’s not what the movie is going for. Now to be sure, “We are better for having emotions” isn’t a revolutionary observation at all; it’s been around since before Gene Roddenberry’s day, and just last summer, Christopher McQuarrie built one of the greatest action movies ever made on that idea. But the way Captain Marvel builds to it draws interesting parallels to how women are seen and treated in patriarchal societies. So even if I saw the twists coming—and though I had some vague feelings, I thought the mystery at the center of the film did a great job of holding its cards close to the vest—it wouldn’t have mattered to me because the film plays fair and it all clicks.

On a related note: This movie started getting firebombed by the alt-right after Brie Larson had the nerve to insist that people other than white men should be part of the film’s press tour. (Which, of course, makes it that much more difficult to say anything negative about the film, regardless of faith or fairness. Thanks, assholes.) But if that didn’t scare the ever-living shit out of those chuds, the content of this film almost certainly would have; it’s critical of patriarchal rule in far less veiled ways than Wonder Woman ever was. The climax even hilariously comes down to the film’s male antagonist essentially screaming for Carol to “DEBATE ME,” a common alt-right discrediting tactic on social media. (And not for nothing, but the whole movie could also be read as an aggressive two-fingered salute to the so-called “Mary Sue” criticism these scumbags just love to fall back on.)

Even beyond what it stands for, however, the film does great work in another crucial area: character. The action scenes may be take-or-leave, but character has always been Boden and Fleck’s strength, and even in a genre that fits them like an older sibling’s formal wear, they’re still delightfully on brand. Larson’s performance is actually emblematic of this. In action, spitting out one-liners and trying to play tough, she’s oddly stiff and subtly over-mannered. (One particular exchange she has with a secondary antagonist feels like it came out of a Wes Anderson film.) Put her in an explosionless room with Lynch or Law or Mendelsohn or Bening or Jackson, and she’s the same brilliant, natural performer you remember from Short Term 12 and Room.

While certain people on the fringes of the main cast don’t get enough material to really make an impression (Clark Gregg, Djimon Hounsou, Lee Pace, Gemma Chan), anyone who gets a proper turn at the plate knocks it out of the park. Sam Jackson has an absolute blast playing this younger, more freewheeling version of Nick Fury, and his buddy-cop chemistry with Larson (who previously acted with him on Kong: Skull Island and directed him in Unicorn Store, which is finally getting released on Netflix next month) is on point. Lynch and Law are similarly great foils for Larson, and Mendelsohn makes the absolute best of his typecasting. And as someone who shamefully has yet to check out 20th Century Women, I can’t believe I didn’t realize how much I missed seeing Annette Bening around until I saw her kick an astonishing amount of ass here. Strong character work has always been a part of the Marvel Studios brand, but here it’s the best I ever remember it being, and future Marvel directors would do well to study how Boden and Fleck staged these dialogue scenes. In fact, if Captain Marvel 2 is just these people playing poker and talking shit with no superheroics, I’ll preemptively declare it the best film of whatever year it’s released.

Of course it won’t be, but there’s plenty of hope for a better sequel: there’s a surprisingly tense chase scene set in the file room of a secret USAF base that suggests the filmmakers have their suspense fundamentals down and could probably top themselves with a stronger second unit. Technical credits are otherwise solid across the board; Ben Davis’ photography is often gorgeous. Andy Nicholson’s production design does a great job recreating the mid-90s LA we remember from movies like Speed, True Lies, and Face/Off. And Pinar Topak’s music is…there, honestly, but I give her points for occasionally breaking out a fake Rhodes keyboard like all the great 90s TV dramas did at one point. It’s ultimately another thing emblematic of Captain Marvel as a whole: It doesn’t connect like I hoped it would, but the inspired elements around it point to a very interesting future.

It feels good to be mostly right.

All images via Marvel Studios