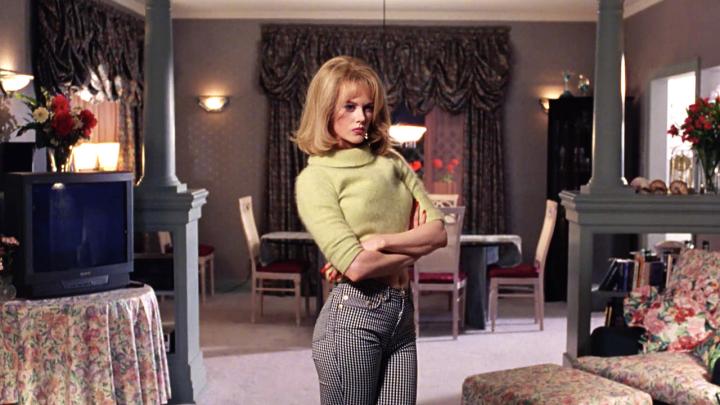 I dislike many of Gus Van Sant’s films, so I was admittedly rather steady before coming into To Die For. Coming out of To Die For, the most pleasant surprise to which I have acquired out of it was that Gus Van Sant has indeed created a film that I also found myself never completely detached from in the end. With To Die For, Gus Van Sant has created a satire unlike any other, something that still rings quite amazingly with the mentality of people and a fear of their lack of relevance as time passes by especially among people who have earned fame for a short while. I only wish that Gus Van Sant had stayed so consistent in terms of the quality of his films especially when he has something as great as To Die For under his own belt. A film that’s truly as funny as it is also scary.

Nicole Kidman takes the spotlight as Suzanne Maretto, or Suzanne Stone professionally. She carries a seductive image, but her psychology is not a good reflection of her well-being. She’s a murderous and manipulative figure, but we never forget the whole time that she is still human and thus we even share some sympathy for her. This is where I find Gus Van Sant excels at rather perfectly – exploring the motifs behind his characters and what forms their own mannerisms, even if I can’t seem to find most of what he tells to be compelling. In the case of To Die For, however, my usual gripes with Gus Van Sant were almost nowhere to be found. He presents Suzanne Maretto as an absolutely compelling figure from beginning to end, and every moment in which the film went on kept her an intriguing figure.

What’s clever about how the film explores Suzanne Maretto and her interactions with the outside world is how she is clearly a woman who desires all the attention, so given the mockumentary format, it suits the film in such a manner it keeps all the focus on her regardless of what scene it may be. Her desire is to be the center of everyone’s attention, so in a way, the audience’s focus on her is therefore what Suzanne has been seeking the whole time, hinting more at the cleverness that arises from To Die For. If she knew this audience who was watching To Die For was around, she would soon come out to find the glory that she has been aspiring to reach given as we have an entire film made within the documentary format focusing on her and nothing but. Yet there’s more about a figure like her that also makes To Die For such a fascinating case.

To Die For is also never afraid to head into rather morbid territory with its own social commentary. The dark humour is certain to be found within Buck Henry’s clever writing, but the fact that Gus Van Sant looks upon the damaged Suzanne under a clearly sympathetic light is where something frightening has come about. Gus Van Sant portrays Suzanne just the exact way to which she knows she has always wanted to be seen, figuratively as a princess who gets whatever she wants from the kingdom around her, television. Her dream is to become a world-famous news anchor, and she will do anything to head to that area, even if it will cost putting a bad image upon herself in front of the public, by taking part in activity that could even lead to murder. She gains our sympathy, but she is a psychopath, at least the sort that an audience would clearly be attracted to. Part of me gets woozy over a psychopathic character much like Suzanne, because Gus Van Sant’s willingness to give her all the power she wants on the screen is truly a career best.

Nicole Kidman is as the title would suggest, to die for, inside of this leading performance. Given as her character is the center of attention, she has the freedom to do whatever she is willing to let out onto the screen and Gus Van Sant’s well-meaning especially with forming her arc gives off a vibe that makes such a role also feel to some extent so true to life. This is a character that could easily be anyone who is so commonly seen just everywhere on the media, and Nicole Kidman’s representation of such a personality sums up why it can all be so frightening when one comes to think about it. Inside of this performance we recognize a broken soul that is already at the highest of whatever heights she can achieve at the moment which she is living in, but her narcissism only feeds into her wanting for more. Nicole Kidman isn’t simply playing Nicole Kidman anymore, she adopted the frightening psyche of Suzanne Stone to get something like this.

Given how I feel about Gus Van Sant, it really came to my own surprise that I ended up enjoying To Die For as much as I did, but when you look all over the media and you see one figure just everywhere no matter where you go, one can only imagine what measures it must have taken them to go to such depths. Suzanne Stone is the perfect representation of a possibility. A wonderful breakdown of psyche and from what I’ve come around to, Gus Van Sant’s most frightening picture. It’s frightening just from the thought that this is where overachieving can take a person, especially when they’ve already achieved a level of fame which apparently isn’t enough. A satire that is as funny as it is frightening, To Die For is quite easily, to die for.