One would already recognize George A. Romero’s name for the famed Living Dead film series, whose first two films still go down as being amongst the most iconic of all zombie horror films. The Crazies, one of many films that came in between Night of the Living Dead and Dawn of the Dead and it also shows an interesting experimentation with the sense of panic inside of one’s mind. While nowhere near as good as it could have been, it is still one that deserves to be viewed on the count that it develops one of the primary factors that Romero would master in order to give Dawn of the Dead the impact that it has managed to achieve over time. It was underrated during its original release, but the cult classic status it attained, deserved or not, is debatable. 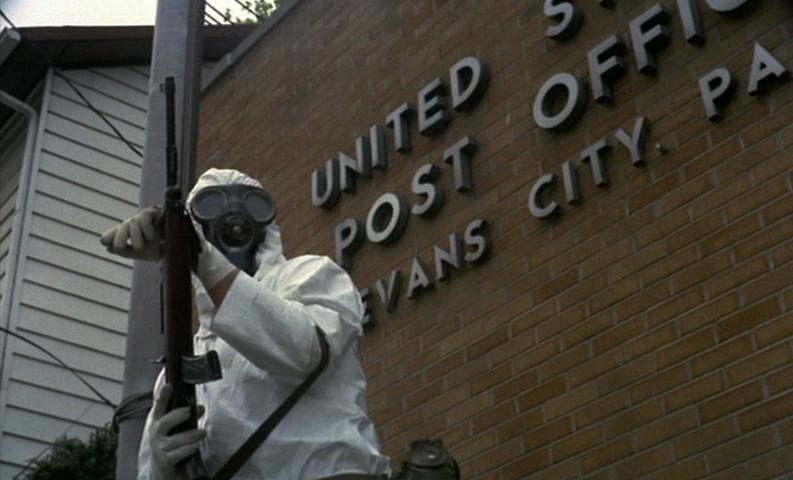 A calm town under quarantine after Trixie spreads in The Crazies.

The Crazies tells two distinct stories which both take place within Evans City, Pennsylvania, after the effects of a virus, which is code-named Trixie, that either results in one’s death or a transformation into a psychopath. One of these stories focuses upon the surviving residents who have not yet been impacted with the devastating results of the virus as they try to make it out alive, and the other revolves around the leaders who are trying to keep the virus confined into a small space before it ends up spreading to apocalyptic results. What’s interesting about Romero’s shifting between the perspectives about the situation is that he gives the viewers a clear sense of what is running through certain groups’s minds as said events happen in front of their eyes but it is also open to where gaping problems arise.

Although the brisk pacing makes for something fun enough to run within its fairly short length, there’s still an element that lacks at least with how The Crazies, within its distinctive perspectives, still feels somewhat alienating. Given how much action takes place all at once, there is still an alienating effect left behind when Romero is moving through perspectives. It is never clear enough to the point that The Crazies ends up far more convoluted than it should be, and thus some of the tension ends up only feeling half-earned as a result. The other half almost feels nonexistent all because of the rather abrupt transitions that commence. It does not help when one half happens to be more captivating than the other.

That’s not to say all of The Crazies is plagued by said issue, because many of the action sequences are extremely well-crafted and for those that actually get their time to shine, tension comes along in the best way. With the movement that takes place through and through, he captures a sense of panic that best represents the feeling of being trapped amidst the town as it is under a state of quarantine. That’s where Romero is working to get the best he can out of The Crazies and in turn, that’s where many of the film’s most effective moments have come into play. It is never clear what is going on, but for how much bad it can bring from what has already been noted above, there is enough good presented from the feeling it replicates.

Unfortunately more problems can arise from the unsteady camerawork which also disjoints the film all the more, because it alienates one from what they are watching for it is never clear what is going on as it cannot be seen. That’s not to say most of the film suffers this, because where Romero at least feels as if he is trying to give a much more steady approach for The Crazies, it is still rather effective at what it does and the many small details which he tries to keep focus on make for something that could easily have been all the more frightening at the end. It’s too bad, however, that the moments in which the film could have been more than how it stands end up feeling stinted either by one half being more memorable than the other or the fact it is never clear what to make of what is going on.

Nevertheless, The Crazies is still a clever enough action-horror piece that recreates the one feeling of paranoia so perfectly from start to finish. It’s also clear that Romero is showing a great sense of affection towards 1950’s science fiction whether it be from the campy nature of the exchanges between soldiers or the well-done action that one can see, but knowing what Romero is capable of, The Crazies should have been much more than what it is at standing. That’s not to say that The Crazies is a failure, because it’s definitely an interesting experiment for George A. Romero at least when it comes to the mood established for the piece, but it still feels at best like a warm-up for what would soon be his greatest achievement yet.

All images via Cambist Films.