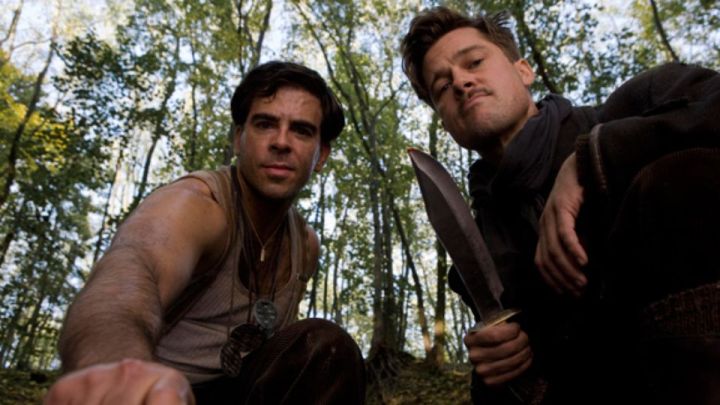 Quentin Tarantino’s movies always have had a delightful knack when it comes to their writing and callings towards older films but if Pulp Fiction were not proof enough that both can add perfectly to create something that feels so fresh, there comes Inglourious Basterds jumping at greater reach. Of the many films that Quentin Tarantino has made over the years, two films remain to be the ones that contain everything that show his own cinematic fascinations at their very most: Pulp Fiction and Inglourious Basterds. A certain power under Tarantino’s eyes is exhibited at some of its fullest in Inglourious Basterds – the very most he’s managed to achieve since his sophomore feature. 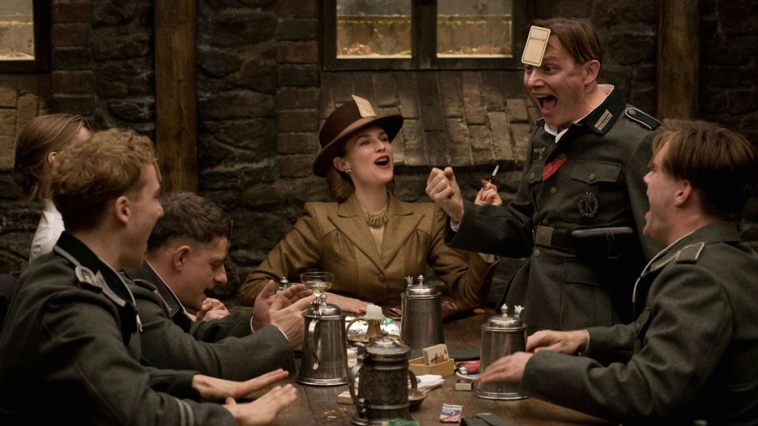 With Inglourious Basterds, Quentin Tarantino goes back to WWII in order to rewrite history under his own eyes but what he highlights in this work carries many of his greatest fascinations. He returns to a similar format that Pulp Fiction had carried, with the scattershot story structure told out of order, but as they are pieced together by the ending there is a specific flow that allows any viewer to latch on without worry. In Quentin Tarantino’s WWII, he chooses to tell a story of a group of Jewish-American soldiers known as “the Basterds” whose intent is to spread fear to the Third Reich. In a sense it plays like an exploitation film but as we watch Tarantino allow oneself to sink into this universe that he has created it’s a clear calling he’s making towards the world we live in now. Yet his own love for cinema is still apparent as ever, especially upon a note we hear him play a tune we remember from Gillo Pontecorvo’s 1966 masterpiece The Battle of Algiers.

There’s a specific aesthetic that Quentin Tarantino has applied in Inglourious Basterds that supplies yet another one of his greatest fascinations: the love of cinema. It’s clear he designs Inglouious Basterds to look like an exploitation film set within another point in time but it’s amazing how even with this style set for the film, this rewrite of history still feels believable and authentic. Aided by his trademark indulgence (dialogue), this universe still gives space for Tarantino to scatter as many characters as he wishes but much like Pulp Fiction, even the smaller portions that he includes are still just as memorable for they aid the story he tells and the abundance of life present in these parts is more than just satisfying, it’s outright delightful.

The revenge story that Tarantino keeps at the very center of Inglourious Basterds is one amongst only a few roots that keeps a heart to such a work but the thought to what it ever is set to express about a modern political climate highlights one among many reasons it could only ever be a work calling for greater relevance inside of its own generation. Looking upon how much all of this stems from what Tarantino at heart is most indulgent within only goes to highlight a greater significance behind the grand scheme. Quentin Tarantino presents this revision of history as a fantasy (starting with “Once upon a time in Nazi-occupied France”) but a sense of boldness it expresses calls out like a voice preparing for the worst within a world only falling all the more dangerous. With Inglourious Basterds, Quentin Tarantino perfectly summarizes the insanity to which the generation’s political climate has become: so much more like a fantasy to that point we refuse to believe it is real anymore.

Every small character that Tarantino includes is just as memorable as they ever could, and should be. It’s easy to fall victim to the sort of charm that Brad Pitt settles himself within as he plays Nazi hunter Aldo Raine but that’s not to leave out any member of the Basterds whether it be Eli Roth as the Bear Jew (in arguably the finest thing he’s ever done for the camera) or B. J. Novak as Smithson “The Little Man” Utivich. Tarantino allows every character their share of space in order to let the smallest parts carry their impact, but two in particular come to mind: Hans Landa and Shosanna Dreyfus. In what may be the finest performance ever to have come out of a Quentin Tarantino film, Christoph Waltz carries nothing but great charisma to this menacing figure he plays in Hans Landa. Every last word of the script Tarantino preps up only allows Christoph Waltz to feel natural within this terrifying performance as the film’s antagonistic force, one that never disappears after the film’s end. Mélanie Laurent may be Tarantino’s finest heroine for the matter, for it perfectly contrasts what was already imagined of how Tarantino wrote his heroines from Kill Bill to exhibit great strength afterwards. Shosanna Dreyfus, in her fragility, uses said aspect even to her own gain and leaves a gleeful arc inside of her growth from the start of the film, for she carries the soul of Inglourious Basterds inside of her vengeance.

No one goes away with talking about a Quentin Tarantino film without ever mentioning his talent for dialogue because in Inglourious Basterds, these exchanges always serve their purpose in both setting up nature and motivation. It was evident enough in Pulp Fiction already even through rambling that seems to mean nothing (e.g. the “Quarter Pounder with Cheese in France” bit in Pulp Fiction) but maybe it’s even more evident in Inglourious Basterds for what Quentin Tarantino sets up is furthering the core of the film. This script that Tarantino has assembled is one that feels just as fresh as all of his best ones do, going from the vignette structure or the long exchanges between characters, but at their heart only something greater is being achieved.

Although Inglourious Basterds may not find itself ranking as my favourite of Quentin Tarantino’s films it is still close enough on the count that it blends together all of Tarantino’s own indulgences together with a message to be sent to viewers about the world defined by our generation. I once thought that a love I had for Quentin Tarantino as I was getting into film was set to fade away over time, but as I came back to them I only found it growing all the more. Inglourious Basterds may only be a fantasy in its ode to the cinema but in reality, there’s a calling that it makes about the world around us. In Tarantino’s fantasy, allowing his love of cinema to spread through the exploitation-esque aesthetic or the visceral display of violence, comes a message against the direction where we head. I think it was already clear enough Quentin Tarantino was onto something when Aldo Raine’s final line comes about: “I think this might just be my masterpiece.”