Film lovers should already be familiar with the name of Charlie Chaplin considering the huge impact he has laid upon the comedy genre over the years. Richard Attenborough’s biopic comes along the same veins where his Oscar-winning Gandhi has come from and although not nearly as long, it’s in part an entertaining one but at the same time too by-the-numbers for its own good, which is the last thing I’d even want for a film about Chaplin. I don’t wish to dismiss Richard Attenborough’s Chaplin as the sort of film that does present itself as a disservice towards Chaplin’s legacy because in part it feels like it can excellently recreate that joy, although there’s another degree to where I’m not even sure what Attenborough intended his viewers to make of the life of the man behind the Tramp himself. What may have worked for Gandhi didn’t transfer well for a tale about Chaplin. 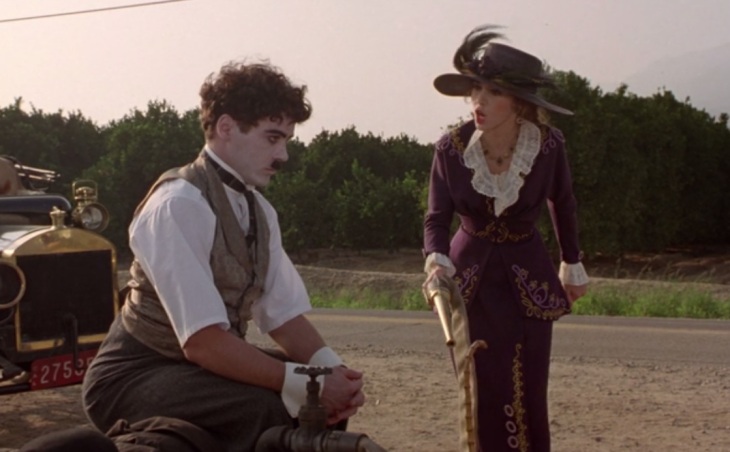 Robert Downey, Jr. stars as the Tramp himself, and the film covers moments from his life as told through a flashback format. Mostly told as an elderly Chaplin is living in Switzerland and talking with a fictional editor for his memoir, the film dramatizes events of his own life that go from his childhood, the creation of the Tramp persona, and the eventual political scandal he was involved with as a result of The Great Dictator. There would normally be a whole lot to tell from the life of a figure much like Charlie Chaplin but I can’t help but feel like the most we get out of what Richard Attenborough decides to show us isn’t particularly much different from the basic knowledge. Not to say that it’s an especially bad way to go ahead and tell the story of a man like Chaplin, but the fact it doesn’t seem to go beyond basic knowledge is where the film finds itself hindered as a biopic: it’s not really willing to take risks.

Not to say that Robert Downey, Jr.’s presence when he recreates Chaplin’s glory is both entertaining and melodramatic in the best sense, because he’s the joy that keeps the film moving. Without his performance, Chaplin easily would have been a disaster because there’s no other performer that would have successfully recreated that glory the same way Downey does, whether it be from his own development of the Tramp persona to the growing interest in politicizing his own work. Yet at the same time, there’s always a sympathy we have for Chaplin himself when Downey transitions into the more dramatic segments of the film, and it’s this balance that fits a narrative about Chaplin so perfectly. Yet with all of this having been said it’s only a half of a wish being fulfilled with Richard Attenborough’s biopic about the influential comedic persona and filmmaker.

One of my struggles with Gandhi is its pacing. At around three hours long, the length can be felt and had it not been Ben Kingsley’s powerful performance as Gandhi, the film could have been even less compelling than it already was. But whereas the film had something to say about Gandhi’s legacy and influence, I’m not even sure what exactly was it that Richard Attenborough wanted out of Chaplin. The way he presents Chaplin isn’t particularly different from a rise-and-fall story of any influential figure, which isn’t the treatment I would have wished to have seen for a film about a comic foil who touched the hearts of many audiences through the many stories he found himself involved within. And like Gandhi, the awful pacing ends up becoming noticeable in Chaplin‘s case – and even though it’s a much shorter film for it sits at 143 minutes in length, it ends up feeling longer.

And it’s not really about what Chaplin achieved, which is in part an interesting and distracting way of telling the story. Rather instead, it’s about the many relationships he’s had all his life, and the problem comes in with how they don’t seem to add anything to what the film wants to say about Chaplin himself. And even when the film covers his own achievements, it just glosses them over because what we get out of here is simply just basic knowledge as many people have already made themselves familiar with these aspects of Chaplin. The best part from the latter, though, is the film’s ending which shows a montage of Chaplin’s work – and it was the fitting way to end the film because it’s where we recognize a specific power one’s own art can convey as the artist reflects upon how they have defined their life. Had I gotten so much more of this, I could easily have found myself enjoying Chaplin even more.

This isn’t a bad film by any means, but given how much we have come to know already on the spot, it’s just a fairly basic biopic. There’s heart at the very center of it as a result of Robert Downey, Jr.’s wonderful performance as Chaplin, but at the same time it’s so lacking because it doesn’t seem as if it wants to explore what Chaplin had managed to create all of his life. The imagery is beautiful although that’s not particularly surprising when you consider the fact it was all shot by none other than Sven Nykvist. But I think how much I’ve already brought myself to know about Chaplin being a fan of his work all my life has dampened the film’s impact, because although it’s easy to recognize the film’s most touching moments, it’s hard to grab onto them because Chaplin doesn’t seem interested in making itself stand apart from other biopics of the sort. Admirable where it calls out, but ultimately a lacking effort.

All images via TriStar Pictures.