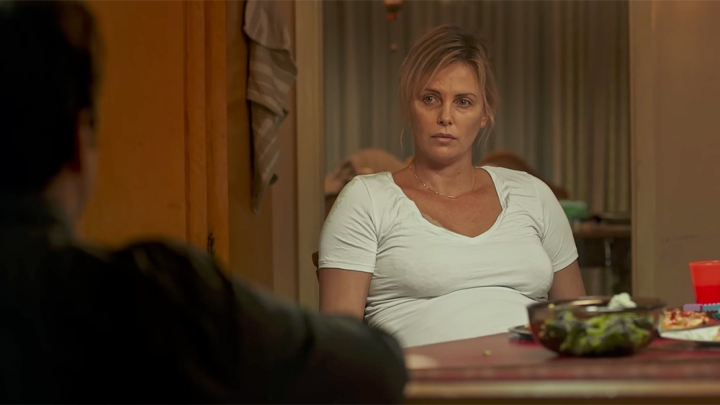 I think I’m starting to find myself appreciating Diablo Cody’s writing far more than I initially would have thought I did, because her writing style seems to have grown far more beautifully within time. Although the rather blunt self-awareness can still be annoying (I still think that this is the case with Juno), there’s already been a clear sense of growth in her partnership with Jason Reitman for I’m only finding myself impressed by what the two of them bring to the screen together. After two misses for director Jason Reitman, it’s nice to see that he’s finding himself coming back onto the right track with Tully – something that I’d been waiting for after how dreadful his previous two films were. For not only is this Jason Reitman’s best film since Up in the Air but for another collaboration between Reitman and Diablo Cody, this feels like the perfect follow-up for Young Adult.

Charlize Theron stars as Marlo, a mother of three – one of which is a newborn. Marlo is a mother not too different from any other, only wanting the best for her children but still facing another personal struggle in the meantime within the household. Starting off with what plays out like the idealized image of motherhood, the film heads another direction in order to show a cluttered reality, placing oneself within the idea of a fantasy and a reality. Though resentful of the idea at first, Marlo’s brother suggests that a night nanny should come over to help her take care of the newborn baby, to which Tully (Mackenzie Davis) comes over to assist her but not without offering her own wisdom coming along in order to help Marlo improve her daily routines – even ensuring that she would be able to find joy in being the mother of three children. It’s all the perfect setup for a more psychologically complex work detailing what it feels like to be a mother.

What I love most about this movie is how it portrays the challenges of motherhood, given how beautifully this film is set from the opening credits sequence before cutting back to show a conversation between Marlo and her husband, played by Ron Livingston. But in this moment you already find yourself feeling a sense of how truly “connected” Marlo and Drew are, because of how this movie understands the dynamics of a nuclear family – before revealing the sense of disconnect that they all have with one another, whether it be between Marlo and her husband, her brother, and her children. But in this disconnect you find yourself coming into the perspective of the mother and how difficult it really is to cope with a new challenge in her life, something that is so beautifully understood by the writing of Diablo Cody. For as much as it can still seem a bit too on-the-nose for its own good, the perspective to which it is coming from is what helps in elevating the film’s sense of importance from the way in which it is being shown to you as a viewer.

Charlize Theron is magnificent as Marlo, but I think this was to be expected after what Reitman and Cody have already brought out of her in Young Adult. But I didn’t expect myself to be as taken aback by Mackenzie Davis’s performance as I was. It’s hard not to love every moment in which Theron and Davis are spending together, but the chemistry that they share with each other thanks to the wonderful dialogue that Diablo Cody has penned for them is what makes watching the two feel so perfect. As the wise nanny who turns out to be more than just a helper around the house, Davis’s performance as Tully is astonishing. But in how the two of them have their own ideas of motherhood, there’s a perfect blend that Cody is exploring here that allows oneself to appreciate the efforts all the more and it also helps that both actresses feel so natural within every moment they share with one another.

There’s so much about Tully that I know is so easy to love, but at the same time I’m not so sure how to feel about the ending. It plays off like the film is reaching out to make you reevaluate everything about this movie that you loved so much, and walks over a thin line to an area that it doesn’t exactly explore enough. Although I do appreciate what Reitman and Cody had intended to say with this ending, I’m not exactly sure if it works as effectively as they would have intended. There’s another area in which it wishes to step into, but the problem is that this feels like such a last-minute shift in tone and it makes the transition feel jarring. Out of common courtesy, I don’t intend to spoil what happens in the ending but that sudden shift is such a double-edged sword given the subject matter of the film and said revelation just feels like the film shoots itself in the foot.

Tully is a film all about trying to find joy even in a life that is so complicated and far removed from expectations, especially within motherhood. The best thing that one can feel from watching Tully is the honesty in both the direction of Jason Reitman and the writing of Diablo Cody. Perhaps it may not exactly be the follow-up to Juno and Young Adult that one would be expecting but it’s hard not to be won over by the sweetness that builds this movie up to what it is. Everything is kept simple, just the way in which it should be, but deep down you already feel a sense of the challenges that Marlo is going through especially when her own reality as a mother does not feel anything like expected – but the very best thing to come from watching Tully is, as mentioned earlier, the way it helps in making you appreciate the efforts to be the best.