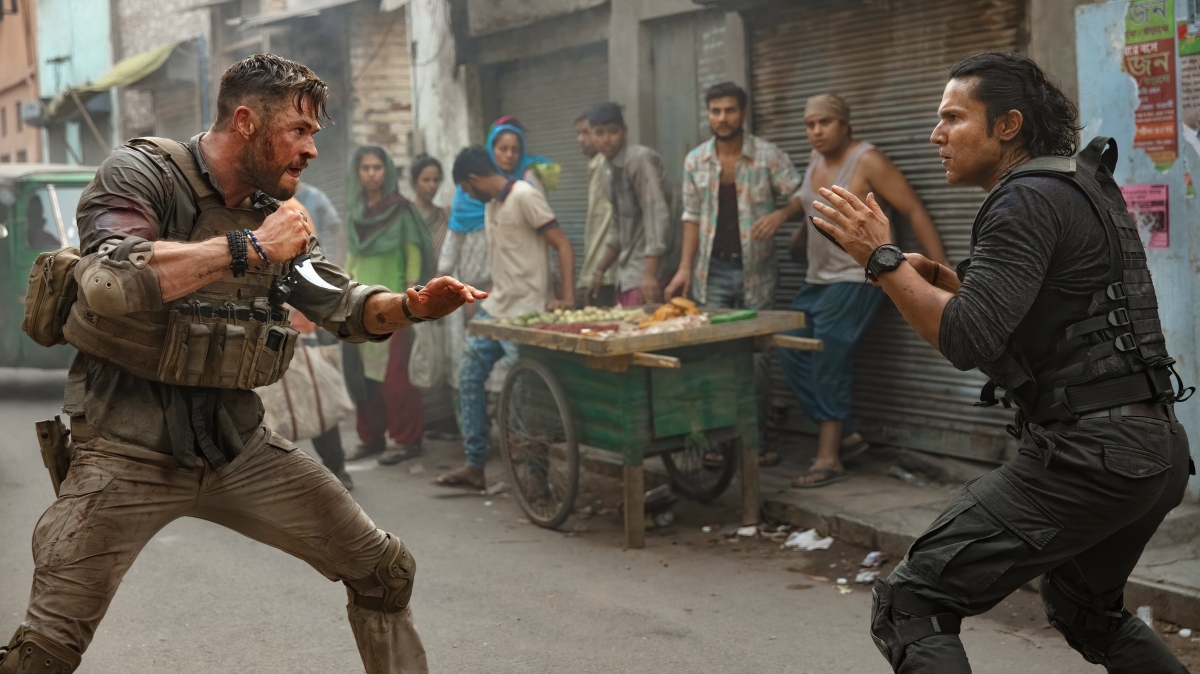 Following all the Jason Bourne-esque action thrillers that we’ve come to see over the years it became much more difficult to find a supposedly “gritty” film that ever manages to be every bit as shocking as it promises. This is where we talk Extraction, the directorial debut of Sam Hargrave based on a comic book created by none other than the Russo brothers, following the fame they’ve achieved from the Marvel Cinematic Universe. One could ever hope for Chris Hemsworth’s charisma to drive the film forward as it indulges in the excessive violence but unfortunately for every moment it boasts said aspect it also is incredibly dull.

Set in India, Chris Hemsworth stars as the American black ops agent Tyler Rake, who embarks on a mission to rescue the son of a notorious crime lord in Mumbai. As Extraction continually indulges within the beauty of where it’s set, it slowly begins to lose more of its steam as it later delves into these impressive set pieces. But you’d also be able to tell that this film is trying to convey so much of that grit through the colour palette and the extreme violence, yet many of these elements end up working against Extraction when most of this just happens to be very boring.

Based on a comic written by Joe Russo, Extraction is a film that feels reliant upon the roots of other action films made within a similar style – but it also lacks the same sort of substance that made many of them compelling. Yet the aesthetic alone would already scream at you as if it wants to be seen as one among those, but the extreme violence can only go so far when so much of that feels so dull too. It looks incredibly dull, the action scenes at best are incredibly boring and at worst uninspired, even massive blood spurts can never hide this. Unfortunately, this feels expected par the course of the Russo brothers, with the stunt coordinator for Captain America: Civil War taking directing duties and only bringing very drab scenes one after another which almost never make use of some inventive set pieces.

Yet it’s almost unclear what sort of movie does Extraction ever want to be, made clear by how its aesthetic supposedly wants to evoke something of a gritty feel akin to the Bourne movies. The colour grading looks incredibly ugly, making some rather impressive set pieces almost seem dull. There’s a moment where you have a long take that could almost be impressive to watch, because of how it’s set up, yet even a supposed feat that only seems more like an attempt to show off only takes away any sense of excitement that would have come forth from said moment.

Extraction has an appropriate title, because many of its best scenes for what they’re worth feel only as if they’ve been extracted from better movies within the genre. You’ve already seen a movie like this that manages to deliver on the high stakes together with the grit, but the Russos only seem to catch onto an aesthetic appearance more than what made said movies very effective. You’ll probably have a lot of fun just looking at the film’s noted long take, but there’s almost nothing here that ever really has much desire to stand out.