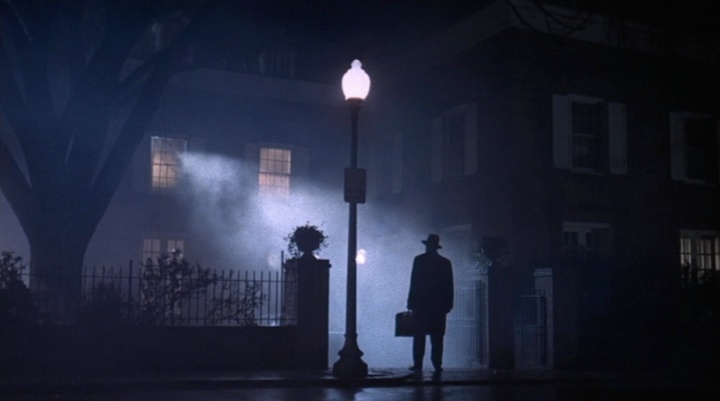 William Friedkin’s iconic The Exorcist has otherwise set a staple for the horror genre within the years to come for it exemplars what forms a truly perfect horror film. Marketed as “the scariest film of all time,” what follows may not be something that lives up to that title (I never found it scary from day one and to this day I still don’t), but something that excels in its own craft and remains a milestone for horror films of all sorts. Already a showcase in terms of the tremendous special effects, The Exorcist remains a film to define the horror genre for many reasons. Whether one finds it scary or not, to deny the exceptional crafting of such a powerful film is rather ludicrous. It is no surprise as to why it is considered the scariest film of all time in some circles, for even if it may not be my favourite of the sort, it truly is as perfect as the horror genre can ever get.

William Peter Blatty’s novel which provided the basis for The Exorcist is based in some aspects upon actual events, but the material to which it tackles is where something greater is released. IT would not be any surprising that The Exorcist would in some sense be considered blasphemous to religious groups (most specifically Roman Catholicism) especially when it comes to the manner to which it portrays evil but without such blasphemy, where would the power of The Exorcist come from? One sequence that comes to mind would be the crucifix masturbation scene which proved itself too much to some viewers, but when looking at it from the religious perspective, there is a point to which we see that one group is being insulted and thus left uncomfortable with how they are treated. Evil is not a force that provides any form of mercy and thus it always tries to find a way to provoke any viewer of any group, religious or not, and at that level, The Exorcist is truly a success.

It is still impressive to watch how William Friedkin sets up circumstances for the many strange events within The Exorcist following Regan’s possession especially within the first sequence. In said first sequence, we watch Father Lankester Merrin in Iraq as Friedkin establishes the relationship between priest and demon. It is from how Friedkin works around the characterization in The Exorcist that eventually creates an all the more successful product all-around – for after the opening sequences, Friedkin’s manners of establishing relationships between characters (mother and daughter, priest and mother) only brings the viewers much closer as a result to what they are witnessing. By the end of the film, these people whom we have been watching are characters whom we have come to sympathize with, an important factor that makes horror films in general work.

The Exorcist does not rely so much on jump scares as opposed to setting up an atmosphere to build up the feeling of dread. Instead, the lack of shock works its way to a viewer’s head in order to bring further a much more drastic effect afterward. Friedkin creates a world that feels so normal all around, to the point it in certain sequences resembles a world much like the one that shrouds the viewers. From how normal it feels, something terrifying unleashes during moments in which the viewer least expects it, and then the most exceptional qualities of The Exorcist afterward are allowed to shine. This atmosphere allows for natural performances to arise from the cast which he has assembled, which ultimately creates a much greater effect to which The Exorcist soon plays along with.

Also worth noting is how The Exorcist is also a showcase for exceptionally handled special effects, which help in creating more of an authentic vibe for such a film to play along with. Whether you look at the executions of specific scenes whether it be from the furniture flying across the room or most infamously the spider-walking sequence, Friedkin moves along attempting to grasp a sense of realism whether it arise from the mere atmosphere of the film or the special effects, which add up to the great effect which is soon left behind by such a film. The beauty to watching a horror film play out is the feeling it could almost be within our own world, and The Exorcist captures a feeling of naturalism which in turn creates the unsettling vibe it carries all throughout. Although I for one do not find it to be scary, the effectiveness created is where I can recognize others would be frightened.

The Exorcist is without any doubt a classic for the horror genre, and it also leaves behind a sort of wonder that cannot be found anywhere else. It may very well be William Friedkin’s best work as a director, for it showcases the very bare bones of what makes the horror genre as effective as it is especially when at its very best. It works so well to the degree, it makes you feel safe as a viewer within the atmosphere to which it presents, and soon afterwards, something more is unleashed. Whether you find The Exorcist scary or not, to deny what it has set for the genre is implausible. The Exorcist is quite simply, masterful filmmaking just all-around. The Exorcist on one level, is a perfect exemplar for the horror genre. On another, it’s a brilliantly naturalistic piece that also disintegrates religious morals. Thinking of it on that level is where both the true terror and beauty of The Exorcist reigns. A wonderful film.

2 thoughts on “The Exorcist – Review”